Twenty years later, Nas's New York masterpiece holds up as one of the greatest hip-hop albums of all time. 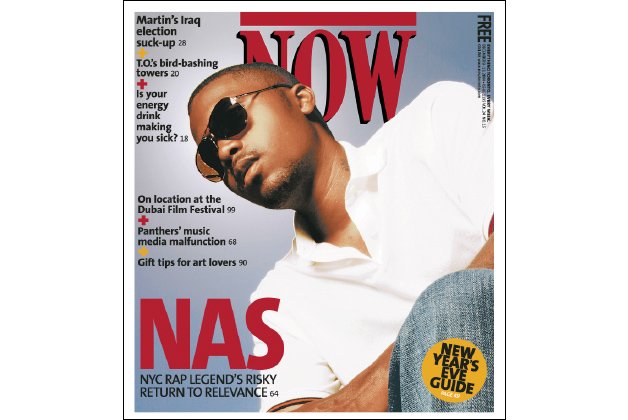 Nas cover from 2004 the midpoint between Illmatic and now.

But years before that debut, Canadian-American golden-age hip-hop group Main Source (featuring Toronto’s Sir Scratch and K-Cut and New York’s Large Professor) were the first ones to put Nas (then Nasty Nas) on record. “I was trapped in a cage and let out by the Main Source” says Nasir Jones in the opening verse of 1991’s Live At The Barbeque.

“We needed one more song for the Main Source record, and Large Professor said, ‘Let’s put Nas on the track alongside Joe Fatal and Akinyele,”

“We went in not knowing what we were gonna sample, and we dug through the 45s we had and used the Vicki Anderson record In The Land Of Milk And Honey, which became Live At The Barbeque.”

Three years down the road, Nas sampled his debut song in The Genesis, Illmatic’s opening track. K-Cut wasn’t surprised at all to hear it in the overture.

“The roots Nas came from are Main Source and Large Professor. Nas was about 16 when I met him through Large Pro. When Large Pro was working on Eric B. & Rakim’s LP, they gave him downtime that he used to work on Nas demos, and we did our demos as well, so we were blessed for that.”

Aside from the fact that it’s air-tight – 10 lyrically perfect tracks with era-defining jazz-imbued production – Illmatic was also the first album to gather a group of super-producers (including DJ Premier, Pete Rock and Q-Tip).

It painted a beautifully bleak portrait of his housing project, lit a fire under Queensbridge, New York and East Coast rap, and went on both to define its time and to influence everyone from Jay-Z to Common to Kendrick Lamar to Joey Bada$$.

And rappers aren’t the only ones inspired by the 1994 hip-hopera. For its 20th anniversary, Toronto rockers the Dying Arts decided to honour the original king of New York.

“It dawned on us last year to cover the album front to back – including The Genesis – with live instruments, and do an artistic interpretation of each song,” says lead singer Mike Portoghese.

“N.Y. State Of Mind = rock banger, One Love = mellow piano, atmospheric soundscapes, etc. We’ll be playing off what’s in the songs already, but extracting the buried and often hidden sonic textures. It sounds incredible with live bass and drums.”

They haven’t sussed out who’s rapping what, but everyone has his favourites.

“Loved the Michael Jackson Human Nature sample complemented by the banging snare drums,” says Wes of album closer It Ain’t Hard To Tell. “Nas’s lyrical content and wordplay were timeless. The rhymes inspired me to do better.”

Luckily, Wes won’t have to fight D-Sisive over it.

“One Love is a close second. I rhyme that to myself at least once a week,” he says before referencing some of the song’s most famous lyrics. “My girl hates that Jerome’s niece got shot.”

Unfortunately, Portoghese says we’ll have to wait till the second half of 2014 (the band is busy releasing their self-titled EP, dropping June 3) for their cover tribute to come to fruition.

In the meantime, Nas has released a special-edition Illmatic double album with remixes and unreleased material. “Don’t mess with a classic” is what we’d usually say. This time, though, we’ll make an exception.