NOW MagazineCultureTheatreStorefront Theatre shuts down and looks for another space

Storefront Theatre shuts down and looks for another space

Theatre lovers got some bad news to kick off 2017.Storefront Theatre, the Bloor and Delaware venue where award-winning work has. 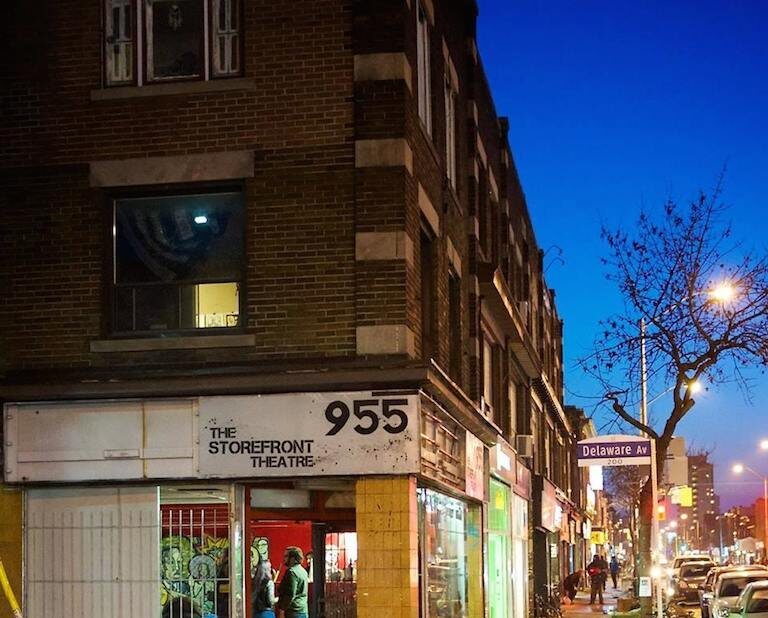 Theatre lovers got some bad news to kick off 2017.

Storefront Theatre, the Bloor and Delaware venue where award-winning work has been cultivated and produced for the past four years, has until the end of the month to vacate the premises.

The news was first delivered Monday night from the Storefront stage by company member Scott Garland, outgoing producer and co-host of the Sing For Your Supper playreading series (which co-hosts/producers Kat Letwin and Cameron Wyllie plan to continue, nomadically), and was confirmed this morning in a press release put out by Storefront.

The news may seem sudden, and is a definite blow to the six remaining shows in Storefront’s 2016-2017 season (some of which may still be presented at alternate venues). But as Storefront Arts Initative’s managing director Claire Burns says, a move has been in the planning stages for some time.

“The tenancy has always been shaky,” says Burns. “We had a lease, but after the flood [in 2014], we moved to a verbal month to month agreement. For the past year, we really wanted to sign a multi-year lease, so we could invest in the space.”

Storefront ran a successful crowdfunding campaign in 2016 to renovate, which would have included soundproofing to mollify the neighbours. But there was no point in beginning those renovations and bringing the space up to code (a necessary step towards a full liquor licence for the venue, which has until now made do with special event permits) if there was no lease to protect their investments, and said lease never materialized.

“So we have some money to start with elsewhere,” says Burns, referring to the renovation campaign coffers, “though we’re hoping to build on that.”

Building a venue that can accommodate a theatre, a studio space comparable to the one SAI still has at Brunswick and Bloor, plus office and storage space, could prove cost-prohibitive.

Burns says the company is considering many options, including existing spaces with liquor licences (a restaurant or entertainment venue) or general assembly designation (a community centre or place of worship, for example).

“It has to be a storefront,” says Burns, or be street-facing, as the concept of neighbourhood integration and accessibility is a core tenet of the Storefront Arts Initiative.

“We’re also looking to stay in the west end.”

The company’s press release says it hopes to reopen somewhere in the fall. For now, STI’s studio location in the Annex will remain open and serve as a temporary headquarters.

Just a couple of years ago, Toronto’s west end had multiple storefront-style small theatres, but in the past year and a half, Videofag in Kensington Market shut down, as did the Sterling Theatre. Most recently, Unit 102 Theatre was evicted from their Queen and Dufferin space, for condo development.

As of next month, most of Toronto’s storefront theatre spaces will be located in the east Coal Mine Theatre on the Danforth, and Red Sandcastle Theatre in Leslieville, for instance.(Storefront Theatre’s close neighbour spaces Comedy Bar and Bad Dog Theatre, both fully licensed comedy venues, are exceptions.)

“Right now, we’re looking for an architectural partner who might want to work with us,” says Burns.

“We’re also looking at different partners, maybe from the comedy community, or the larger theatre community because a space is the one thing everyone seems to value, and nobody seems able to get it and keep it in Toronto.”

When I bring up the current issues being faced by 401 Richmond, whose landlord is being forced to raise rents prohibitively on arts-focused tenant companies due to outdated zoning bylaws, Burns nods in frustration.

“There’s so much entrepreneurial spirit in the arts communities, but the city needs to wake up and pay attention to how all these arts spaces, that contribute to our neighborhoods, are in this knot. Every neighborhood should have a storefront theatre.”

Storefront has of late racked up considerable acclaim for productions on their stage, and been a proving ground for emerging artists.

Chasse-Galerie, a collectively created musical, won them a 2016 Dora Mavor Moore Award for outstanding ensemble, and several Toronto Theatre Critics Award wins the show was remounted in December, in association with Soulpepper Theatre Company. Dora Award-winning playwright Kat Sandler and her Theatre Brouhaha company have mounted a half dozen plays at Storefront.

This season, other award-winning playwrights like d’bi.young anitafrika and Jason Maghanoy have staged work at Storefront, as well as physical theatre troupe Sex T-Rex and serial creators The Pulp Collective, as Storefront made a concerted effort to bring new collaborators into the fold.

Storefront has applied for a not-for-profit charity number and designation it would mean rebates for potential landlords of up to 40 percent off property taxes. As Storefront Arts Initiative, they could share that designation, as well as their space, as an umbrella company for various small and nomadic performing companies.

And plenty of people and companies seem invested in helping Storefront re-establish elsewhere. Burns says the volume of people reaching out as news spreads has been both touching and overwhelming.

“I’ve been very moved by all the emails, calls and texts from people who want to help,” she says. “Being evicted is sad, but we’re also hopeful and excited.

“Let’s fucking make a real Storefront space, with real signage, and a real bar, and real bathroom facilities something that’s going to last.”

Those interested in helping the Storefront Theatre with their move are asked to email storefrontvolunteers@gmail.com. And the company is accepting financial support here.