N.W.A. gets a biopic 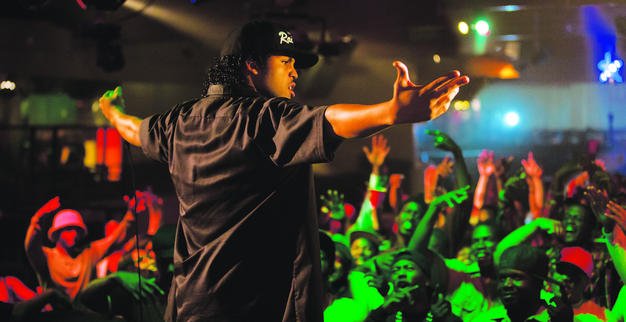 Almost 30 years after N.W.A. made gangsta rap a hip-hop staple, we finally get a biopic. The timing is right. Tragically, the black-denim-clad group’s incendiary anthem, Fuck The Police, and the LAPD behaviour that inspired it resonate today.

Straight Outta Compton emphasizes that song’s anger and underlines its relevance, from Rodney King to Ferguson, with repeated scenes of police overstepping their boundaries.

Thankfully, it doesn’t just revolve around that issue. Behind N.W.A.’s bravado, controversy and legacy were five young guys responding to the dangerous, corrosive streets by making furious music in the studio. That’s the story this sprawling biopic tells intimately and exceptionally well.

Director F. Gary Gray, whose relationship with Ice Cube stretches back to the video for It Was A Good Day, cuts through the violence in N.W.A.’s lyrics to drop the needle on the group’s vulnerability, boyish camaraderie and genial humour.

The most exhilarating scenes see Eazy-E (Jason Mitchell), Dr. Dre (Corey Hawkins) and Ice Cube (O’Shea Jackson Jr.) hanging around a makeshift studio and comically trying to figure out what their sound should be. They rip into each other before tearing up the mic, showing off their wit and sti-fling their distress with laughs. Their attitude is a nice contrast and complement to what we hear when the beat drops.

The main actors do a stellar job bouncing off each other, owning their roles without relying on mimicry, though Jackson Jr. naturally looks and sounds a lot like his father, Ice Cube.

Yes, there were other members (MC Ren’s key contributions are ignored), but this authorized biopic, produced by Dre and Cube, has little time for those dudes because it’s got other stories to tell, to its detriment.

Finding a fitting conclusion to the N.W.A. bio was an unenviable task for the writers. The group splintered just as they hit the top, their relationships left hanging, so the film trudges onwards to Ice Cube’s storied success with the Bomb Squad and Dr. Dre’s tumultuous conflicts with Death Row, which could have filled movies on their own. Eazy-E and vilified manager Jerry Heller (Paul Giamatti) are left to lick their wounds over Cube’s diss, No Vaseline, while plotting a comeback.

These moments seem less lived than scribbled on a notepad, as if there were going to be a pop quiz afterwards. At two and a half hours, Straight Outta Compton is long and rushed at the same time, all the diesel-fuelled momentum of the first half sputtering in the second. The latter section feels like we’re shuffling through N.W.A.’s milestones on Spotify.

In honour of the release of Straight Outta Compton, check out our Top Five hip-hop inspired films here.