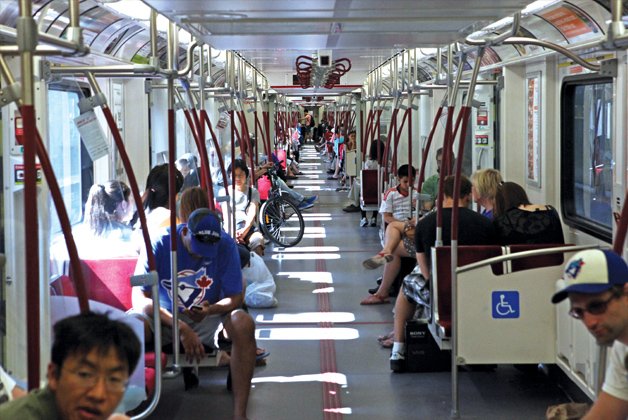 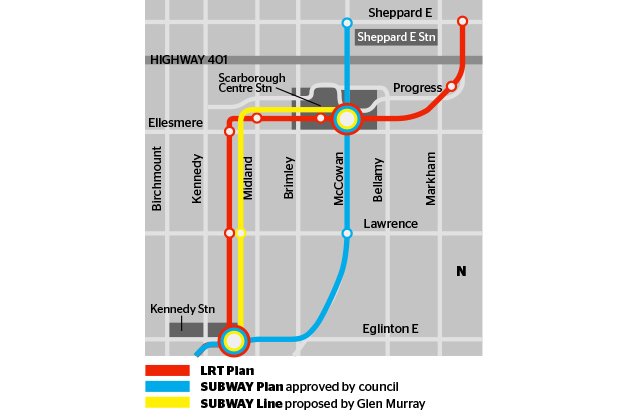 Once more with feeling. Transportation Minister Glenn Murray’s astounding press conference on September 4, where he offered up yet another Scarborough subway scenario – a $1.4 billion plan for a two-stop route following the SRT – was made without consulting the eventual owner and operator, the TTC.

So get ready for a replay of an already frustrating debate.

Here’s a primer on why this project is too pricey, too iffy and too limited to mean much for transit-challenged Scarborough.

The minister would have won more credibility if he’d gathered reporters last week to provide an update on scheduled networked projects for Scarborough and Toronto, confirming they were proceeding.

How about some reassurance that the Sheppard LRT running from Don Mills to Morningside and the U of T Scarborough Campus will actually be restarted after construction was cancelled in 2010 at a cost of close to $200 million? Or that a rapid transit line linking Malvern to the Scarborough Town Centre is still on the table?

If the province is truly interested in moving people, it could start by restoring the operations funding it cut from the TTC several years ago. This missing cash is the reason for the worst-ever crowding on vehicles and for people being left at the curb, and why many bus routes no longer run from 6 am to 1 am.

With a little funding of new buses on the province’s part, and an agreement to restore TTC operations funding, Scarborough would finally be travel-friendly within a year, especially if new express buses were added and reliability guaranteed. The subway, on the other hand, would take 10 years plus to study, plan, design and build – if it survived budget cuts or changes in government.

The province could also hasten Metrolinx’s long-term plan to run GO trains in Scarborough every 15 minutes instead of the current 30. Interestingly, GO trips take 25 to 30 minutes, half the time a subway takes to get downtown, though there would have to be improvements in local routes to ensure more people could make the link easily.

3. LOCAL TRAVEL IN THE LURCH

Murray’s subway plan, stretching 6 km from the Bloor-Danforth line terminus to Scarborough Town Centre, would do little to improve travel in the area, which often requires two bus trips and long waits. That’s because he’s proposing only two stops, at Lawrence West and Scarborough Town Centre. True, Murray said later there could be more – but only if the feds or the city cough up for pricey new stations. Don’t bank on that.

As it is, his funded route doesn’t even connect with the Sheppard LRT. So much for an integrated network. Murray’s underground, in fact, would have three fewer stops than the existing SRT (McCowan isn’t really a useful stop) and four fewer than the LRT plan.

And the topper is, his proposal only shaves three to four minutes off the average hour and 10 minutes it takes from most of Scarborough to bus to the Kennedy or an SRT station, go west to the Yonge subway and then south to the core.

This subway offering should be viewed with a high degree of skepticism because the proposed routing would very likely require substantially more cash than $1.4 bil.

The idea of running the subway along the SRT route in an old hydro corridor looks thrifty at first glance, but it’s a very complicated affair.

Besides the fact that Kennedy station would likely need to be moved and totally rebuilt at a cost of an estimated $200 million (because the curve connecting the existing subway to the SRT line is too tight for subways), there’s the little problem that subway cars are heavier and wider by 2 feet than SRT vehicles.

That means the SRT’s elevated sections would have to be made into tunnels and an existing short underground corridor be re-engineered. Look for trouble ahead if digging starts: Highland Creek runs along part of this route and would make tunnelling difficult and expensive.

These changes would likely make the project more expensive by up to several hundreds of millions of dollars, meaning it might be entirely undoable without extra funding. Thing is, we wouldn’t know for sure what we were dealing with for at least a couple of years, until environmental and engineering assessment studies were well under way.

5. CITY STUCK WITH THE BILLS

The quiet little secret here is that the plan potentially foists close to $1 billion in infrastructure updates onto the city. This probable off-loading comes as Toronto struggles to pay for the upkeep of the TTC, whose state-of-good-repair costs represent over half of our capital budget and net debt.

The TTC, for example, would likely be forced to move up the date for its $500 million signal upgrade to the Bloor-Danforth line. The system is already close to 50 years old and can’t handle the operations necessary if Bloor-Danforth needs to accommodate more trains for the extension’s new ridership.

As well, cost projections appear artificially low since they don’t include the price of six to eight new trains to service the extension. The thinking is obvious: why buy new vehicles when the TTC will have a few extra older ones around because of the arrival of many new Toronto Rocket trains?

Problem is, these are intended to respond to new ridership over the coming decade. Now the city could be on the hook for an estimated quarter-billion more for new trains.

That’s not the only budget pressure: a Scarborough subway extension would use up existing capacity at Greenwood’s subway barn. New cars to be purchased in the coming years due to ridership growth already necessitate a new yard, but with a Scarborough line, construction would probably have to start five to 10 years earlier than expected at a likely cost of upwards of $500 million. Not something to look forward to, since the TTC is already short $2 billion in maintenance budgets over the next 10 years.

Transit riders need confidence in the whole network and the government’s commitment to it. If in the next decade all Scarborough gets out of this mess is two new subway stops, a real opportunity will be lost.