NOW MagazineCultureTheatreSultans Of The Street

Sultans Of The Street 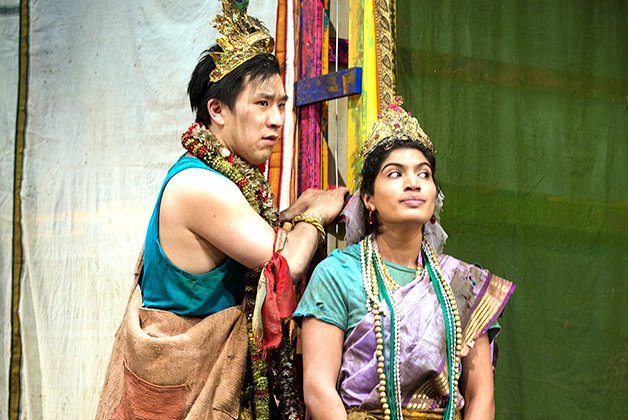 In Sultans Of The Street, Anusree Roy brings two pairs of urban children to life.

Brothers Prakash (Ali Momen) and the younger Ojha (Colin Doyle) come from a comfortable home and play hooky from school to fly their kites. Orphans Mala (Mina James) and her shy sibling Chun Chun (Richard Lee) live on the street and can only dream about going to school.

Set in contemporary Kolkata, India, Roy’s play explores the orphans’ hopes for a better life. Guiding their actions is the mysterious Auntie (Zorana Sadiq), who sends them out on the streets dressed as Indian gods to beg for money and pockets whatever they get.

Director Nina Lee Aquino’s staging, on Camellia Koo’s set of colourful fabrics that swirl to create various locations, suggests the vibrant city and the class differences between the brothers and the other three. The children are clearly defined: the protective, streetwise Mala the naively impetuous Chun Chun, desperate to show off his multiplication tables the principled Prakash and the stuttering Ojha.

The scenes in which the quartet pursue people for coins are full of comedy, in part because their marks are defined by single characteristics: Big Shoe Man, Small Dog Girl, Red Turban Man.

Not all the performances are shaped yet. Momen’s Prakash delivers one of the play’s themes, that fairness and honesty are important qualities, but at this point his character is fairly stolid, without much warmth.

Sadiq plays the mimed characters from whom the children beg, nailing them with an appropriate touch of clown. But her Auntie needs a touch of imperiousness when she rounds on the children.

The powerful climax, in which Auntie’s guile is revealed and Ojha and Chun Chun both stand up to their elders, offers the children newfound friendships and the possibility of a future of their choosing. Roy brings richness to the conclusion, for though it’s uplifting, it doesn’t erase the memory of the past.