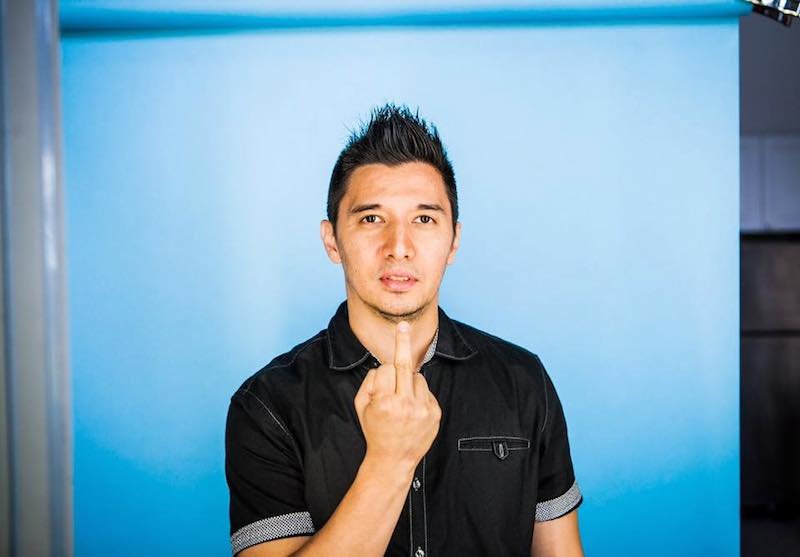 Although it’s been a decade since Bobby Del Rio wrote this stinging satire about the lack of diversity in Toronto theatre, a lot of it continues to hold true. We’re still having the same arguments about representation, old straight white male artistic directors/boards of directors and tokenized minority artists.

Del Rio himself plays William, a struggling actor who gets cast as a big theatre company’s Great Non-White Hope by artistic director Gerrard (Dave Sparrow), who wants, among other things, to have William change his name to Vikram.

William gets conflicting advice about whether he should take the part from his girlfriend, Tracy (Chantel McDonald), a lawyer concerned with social justice, and his main bro, Kyle (Rico Garcia), a pragmatic engineer.

Under Rouvan Silogix‘s direction, there are lots of big, broad moments of humour, such as Gerrard’s increasingly pompous and ridiculous self-congratulatory speeches. And I won’t spoil the biggest laugh, a visual joke that Del Rio sells with a completely straight face.

But there are also lots of subtle touches, such as Tracy’s insights into class and opportunity, and the repeated use of the term “Gentlemen” to address groups of people.

Some scenes are a bit too short, and the transitions between them aren’t always smooth, but this is an important play that everyone involved in Toronto theatre should see. The production’s talented artistic team, of course, is beautifully diverse itself.

Included at the end is a long table discussion open to everyone to share experiences and explore some of the still relevant topics in more detail.