Labour Day parade: enthusiasm was muted at the annual rite of summer as the situation for precarious work and the labour movement in Ontario turns grim 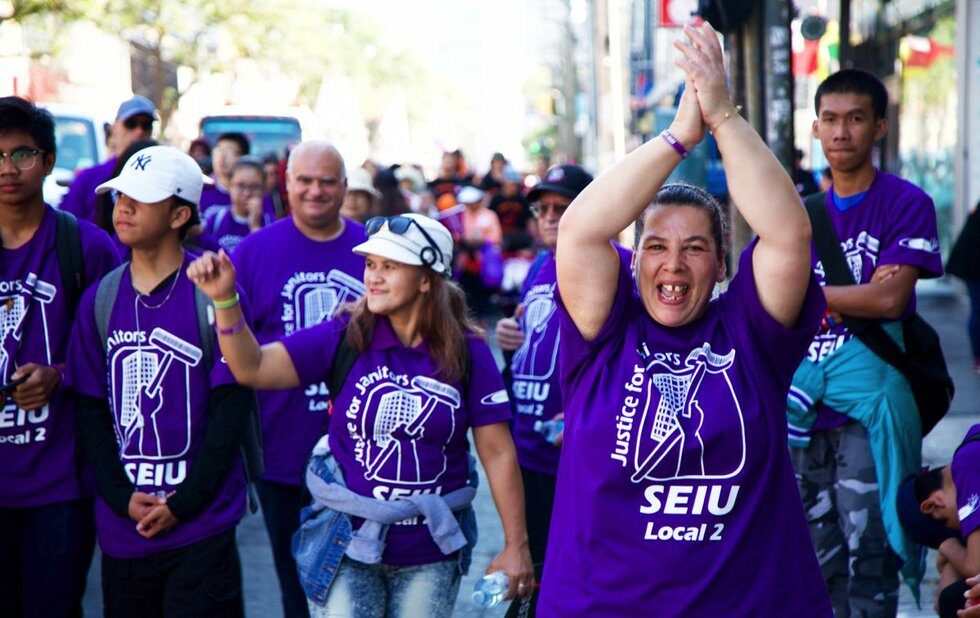 Olga Da Cruz, a janitor and union steward for SEIU, was among the more devoted participants at this year's Labour Day parade.

Thousands of workers marched from Queen and University to the Ex on Monday, September 5, in the Labour Day parade.

The the annual rite of summer is a good opportunity to get on the ground to speak with rank-and-file workers and union leaders about the state of the labour movement.

Among those showing enthusiasm in the parade was Millicent Hall, a personal support worker and member of the Service Employees International Union (SEIU).

“It’s very rewarding to help people meet their daily needs and treat them the way I would want to be treated – with dignity,” Hall says.

Olga Da Cruz, a janitor and union steward for SEIU, offers, “I try the best for everybody to have good work conditions.”

But the energy and attendance at this year’s event was lower than in recent years, with the contingents spaced further apart along the parade route.

“It is a bit of a downer parade. Nobody is really watching,” says Casey Oraa of the Canadian Labour Congress.

The situation for the labour movement in Ontario is looking pretty grim. Even the powerful Ontario Teachers’ Pension Plan is planning to outsource jobs to India, although OPSEU local 598 president Jeff Billard says he’d prefer to see the fund divest “from things like tobacco, Big Oil and companies that exploit labour rights.”

At this year’s event, debate around a $15 minimum wage dominated discussions.

With some 27 per cent of workers in precarious, temporary or casual positions, according to the Interim Report from Ontario’s Changing Workplaces Review released in July, “there are too many people in too many workplaces who do not receive their basic rights.”

And those most affected are from racialized communities, says Nigel Barriffe, president of the Urban Alliance on Race Relations. Bariffe, a schoolteacher in north Etobicoke, says, “Many parents are working two or three jobs. It makes it difficult for them to spend time at home with their children, and it surely impacts academic performance.”

In April, Prime Minister Justin Trudeau got a standing ovation from the Unifor convention in Ottawa for saying that “labour is a solution and not a problem,” and noting the movement’s efforts for women, LGBTQ and Indigenous workers and people with disabilities.

Unifor, Canada’s largest private-sector union, has drawn criticism from within the labour movement for giving Trudeau a platform at the convention because he doesn’t support the campaign for a $15 minimum wage for federally regulated workers. The PM has questioned whether, with a hike to the minimum wage, “everything just gets more expensive or we have jobs leaving.”

Criticisms of Unifor are “unwarranted,” says Canadian Labour Congress president Hassan Yussuff, who gives Trudeau a B+ “for showing an openness to working with us.”

For many workers in Ontario, a jump from the current $11.25 to a $15 minimum wage will mean the difference between living below or above the poverty line, says Deena Ladd of the $15 and Fairness campaign. “People have bought into business’s perspective that the sky will fall,” she says.

Both the federal and provincial NDP find themselves in an awkward situation with labour. In the 2014 Ontario election the party supported a $12 minimum wage but since April of this year has officially backed a $15 minimum.

Ontario NDP leader Andrea Horwath says, “We are proud of a platform that for the most part paid attention to the struggles of working people at the grassroots level.” She acknowledges that “certainly we have some lessons to learn tying those practical platform items into our broader vision as New Democrats, and I take responsibility for that lack in our campaign.”

Federal NDP leader Tom Mulcair is less apologetic about the party’s campaign proposal for a balanced budget, which was criticized by many within the labour movement as a move toward austerity over social responsibility.

“The NDP adopted a position in Halifax in 2009 to balance budgets that remains our policy, and if one of the people running for the leadership wants to change it, they are more than welcome to,” Mulcair says.

The labour movement and their political allies have a lot of work to do.