When Jimmy Kimmel taped his interview with. 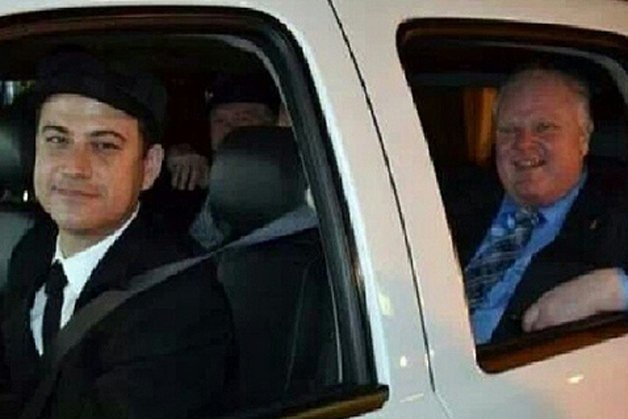 When Jimmy Kimmel taped his interview with Mayor Rob Ford on Monday evening (March 3), a handful of journalists watched it live from a green room in Kimmel’s Hollywood Boulevard studio. Toronto Sun columnist Joe Warmington was not among them.

But that didn’t stop the Ford cheerleader from publishing a piece declaring Ford’s appearance a “victory” before he’d actually seen it.

It was first posted on the Sun’s website at 9:13 pm and later updated at 10:17 pm. The tweets of those who were in the studio indicate that Ford’s segments were taped between about 9:40 and 10 pm EST. The show airs on the East Coast at 11:35 pm.

Here are some of the things Warmington said about the program he could not yet have seen:

Warmington also attempted to argue, without irony or awareness, that Ford’s impact on Toronto has not been worse than O.J. Simpson’s was on L.A., and that concerns about his dragging down our city’s reputation are therefore misplaced.

Canada.com’s Marc Weisblott was first to tweet Warmington’s column (“Joe Warmington reviews a show before it airs”). Fifteen minutes later, amid suggestions from those in the studio that Ford’s appearance had been a disaster, the Sun pulled it down. (You can read it in Google’s cache.)

It was like a prematurely published Chinese state media report on a successful spacecraft launch that was in fact still several hours away.

Just after 11 pm, Warmington got Doug Ford on the phone and took a second stab at writing about the show without having seen it. It opened like this (spelling and punctuation retained):

“It seems Mayor Rob Ford walked into a bit of an ambush. An all out barrage maybe a better way to put it.

“Turns out Mayor Rob Ford’s appearance on with Jimmy Kimmel was a lot tougher than he was expecting. The American TV star was relentless in his questions and showed four embarrassing videos.

“He probably should have seen that coming.”

It went on to quote Doug saying the mayor was “a little upset” but “did his best.”

“In the background,” Warmington wrote, “I could hear the mayor saying he was ‘set up’ but did not seem angry or pouting.”

This version went online around 11:40 pm, during the broadcast of Kimmel’s opening monologue.

After actually watching the interview himself and evidently realizing that it was nothing like his first version nor as brutal as his second version, Warmington wrote a third take, which began:

“No question Mayor Rob Ford walked into an ambush. An all out barrage may be a better way to put it.

“But he handled it a lot of better than he thought he did and the way people were reporting he did.”

The online story was later updated at least once more to incorporate brief quotes from Mayor Ford himself (e.g., “It was fine”). But the version that ended up in print was actually stitched together from elements of Warmington’s first two attempts, along with additional material.

I reached out to Warmington for comment on the way this unfolded – as well as on the Canadian Press story suggesting that he may have played a part in bringing Ford to Kimmel in the first place. But he declined, saying he may address it on his radio show Tuesday night. And so he did.

As for the unusual evolution of his piece, he described the first version as “a seat-warmer kind of thing so that everyone could see how it was gonna fit on the page. And the story was always gonna be developing, it was never meant to go up online, but it ended up – someone made a mistake.”

And on what was he basing his precognitive account of Ford’s appearance? “I was privy to some people that were involved in the show, who gave me some sense of what was supposed to happen. None of which did happen.”