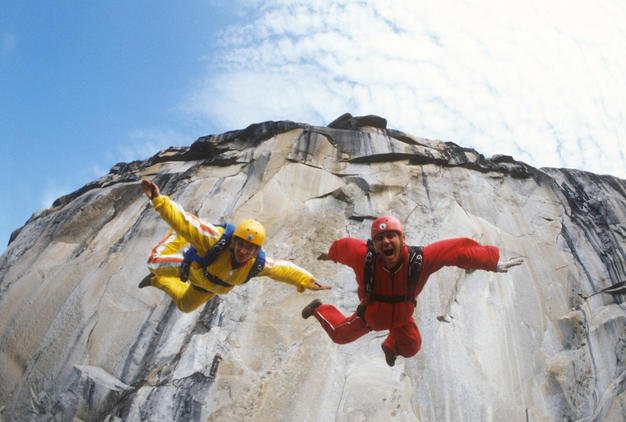 Jean Boenish and Carl Boenish risk it all in Sunshine Superman.

Sunshine Superman celebrates the passion of Carl Boenish, a pioneer of BASE jumping. That’s the thing where someone jumps off a skyscraper or cliff and deploys his or her parachute at lower altitudes than are generally considered safe for skydiving.

It’s thrilling, and it’s risky. Boenish – who crafted some very impressive aerial stunts for John Frankenheimer’s skydiving drama The Gypsy Moths – was more into the thrill than the risk. And he convinced plenty of jumpers to strap cameras to their heads, which resulted in some spectacular footage.

Marah Strauch fills her documentary with that footage, much of it shot or produced by Boenish himself. There is so much BASE-jumping footage, in fact, that the doc starts to feel like the high-altitude version of a Warren Miller skiing film.

That’s probably how the single-minded Boenish would have wanted it, but if you’re not into the sport it gets a little monotonous.