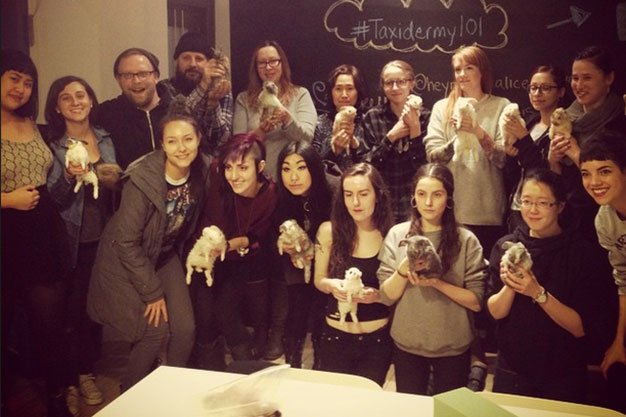 If it hadn’t been for a dead squirrel on a kitchen table, Mickey Alice Kwapis might be a miserable law student right now.

“I couldn’t be happier with the accidental taxidermy encounter that I had,” she says while laughing.

The first time Kwapis successfully reanimated an animal’s corpse, it was at the request of a friend struggling with a college science assignment. Armed with a bottle of wine and an out-dated biology book, they successfully stuffed and mounted the rodent. She credits this process as the reason she swapped studying for the LSATs with studying taxidermy. And this past weekend, Kwapis brought her now-seasoned skills to Toronto for a series of lectures and workshops.

Kwapis, a 24-year-old based in Chicago, spent the weekend at Action Potential Lab, a centre that’s aimed at bridging the gaps between science and art. For Lisa Carrie Goldberg, the lab’s founder, she sees these classes as being the perfecting blend of left and right brains.

“In many ways, taxidermy is a very literal merging of science and art.” she says. “You have the knowledge, skill-set and practical training in combination with the craft, technique and visual aesthetic.”

These one-day training classes are now well maneuvered territory for Kwapis who has run pop-up sessions all over North America, including two previous ones in Toronto. And in many ways, these casual classes mimic the way she herself learned: instead of taking formal courses, she read books, watched videos and acquired a mentor (“His name is Chuck. He lives in California”). During last weekend’s sold-out sessions, she taught attendees to make mounted rabbit heads or Victorian-era rat dioramas, projects that reflect her light-hearted demeanour. But her levity should not be mistaken for a flippant regard for her art: she expects her students to be respectful and come ready to get their hands dirty, but still have fun.

“It’s important for me that people aren’t doing the classes for the purposes of shock value on social media,” she says.

And for the most part, her attendees usually arrive with a sincere passion to learn. So, what does an introductory taxidermy attendee look like? According to Kwapis, it could be anyone. Her first student was an 11-year-old she met at a craft fair. And the group of 7-year-old Girl Scouts she taught a few weeks back were the best attendees she’s ever had, finishing their projects in half the time it typically takes her adult students.

Kwapis is not only unique in being a young female who practices the art (she loves watching people squirm as they try to describe what a “typical” taxidermist looks like) she’s also unique in that she teaches a greener form of the craft.

“I use the term ‘sustainable taxidermy’ to describe work done using specimens that are obtained legally,” she says, noting that a lot of her contemporaries hawk their wares online without noting how they came by the carcasses. “There needs to be some level of transparency and you have an ethical responsibility to tell your clients where the animal is actually coming from.”

“[The animals I use]  either die of natural causes, accidental causes or, most often, the animal are raised to be used as meat.” The ones for the Toronto workshops, for example, come from a snake food breeder in Scarborough.

If you feel like you’re the type to stomach your way through a taxidermy lesson, there’s an added bonus: Kwapis sends students home with the unused meat and a recipe for deep fried rabbit.

“As far as I’m aware, I’m the only taxidermist working in North America that’s teaching classes that literally utilizes every part of the animal.”

While Toronto has seen taxidermy classes in the past, and the Contemporary Zoological Conservatory is always available to satisfy one’s need for furred rigor mortis, there’s a paucity of outlets for amateur enthusiasts in the city. And it’s for this reason that these classes might have sold out as quickly as they did.

Find out more about Kwapis here.