NOW MagazineCultureTheatreSwell Broad and The Homemaker

Swell Broad and The Homemaker

SWELL BROAD by Brooke Banning and THE HOMEMAKER by Laura Anne Harris (Peanut Butter People and Convection Productions). At the. 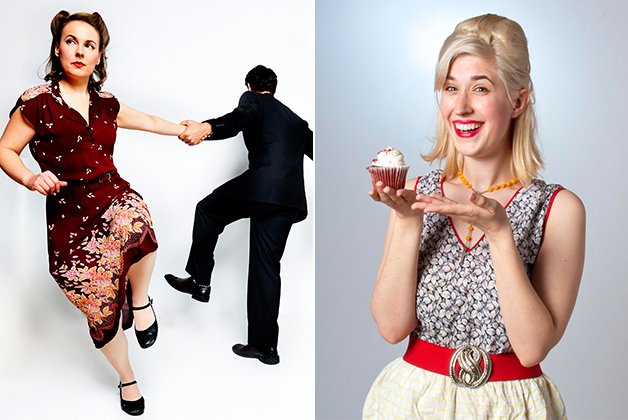 Swell Broad (left) and The Homemaker

Social roles and relationship choices are so flexible today that it’s hard for some young people to imagine anything different.

But in the 1950s and 60s, the opportunities available to women were often limited, dictated by codes that straitjacked how people – men and women – behaved and lived out their lives.

A double bill of one-acts, Brooke Banning’s Swell Broad and Laura Anne Harris’s The Homemaker, examine the frustrations of two couples from that period, each play employing a surprisingly light touch at first before turning more serious.

Swell Broad follows Delilah (Janelle Hanna) and Stuart (Philip Furgiuele), who begin a conversation in a cafe. He wants to develop a serious relationship, but Delilah, though also interested, wants to do it on her own unconventional terms. Despite moments of being flirty, she’s a plain-talking realist who believes that marriage is a sham Stuart, in contrast, is a romantic who plays by conventional societal rules.

Delilah refuses to be ladylike, wants her independence and asks to be paid for the time she spends with Stuart. Agreeing reluctantly, he invites her for dinner and springs a few surprises on her.

Under Harris’s direction, the actors have a warm, playful chemistry at the start of the show, which begins with some stylized movement that prepares us for the possibility of a happy ending.

But the setup is the stronger part of the production once the material turns intense in the second half, with Stuart trying to give Delilah a sense of her power over him, the script becomes less focused.

Harris’s solo show The Homemaker also begins in a comic vein as we meet Janette Pettitpas, a French-Canadian housewife in Albertville, Saskatchewan who breaks the fourth wall and, welcoming us into her kitchen, makes us laugh with her. But as we hear the history of this woman, whose life is determined by her daily baking, the set-menu dinners she makes for her husband and the rules for wives dictated by the Catholic church, we realize that her antics cover a dark hole of emptiness.

Janette’s refuge is liquor, and she finds numerous places to hide caches of booze even her husband is defined in terms of alcohol. The viewers become her (possibly imaginary) audience as she performs Patsy Cline songs, offers a flamenco dance and does a strip number with her rubber cleaning gloves, complete with a follow spot.

Harris creates an immediate rapport with the audience and, with the help of director Morgan Norwich, pulls us easily into Janette’s world. She admits, smiling ambiguously, that she’s bored with her routine and wants more from life, including a fuller sexual relationship with her increasingly distant husband. Trouble is, her Catholic upbringing won’t allow her any freedom or the possibility of leaving the marriage. Janette’s far from a happy homemaker.

What begins with laughs become sober and tragic by the final blackout, and Harris does a fine job taking us on a seamless journey from one emotional world to the other.