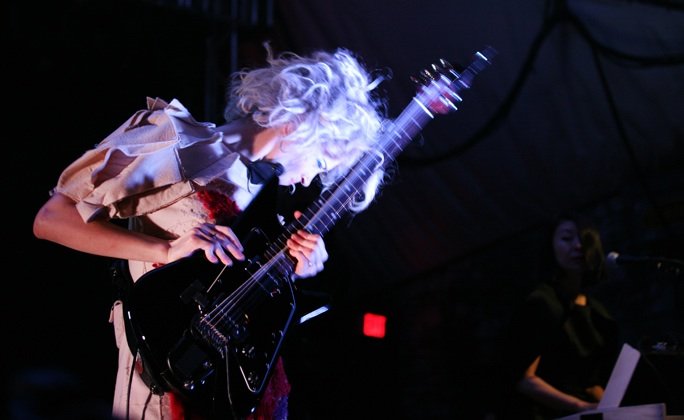 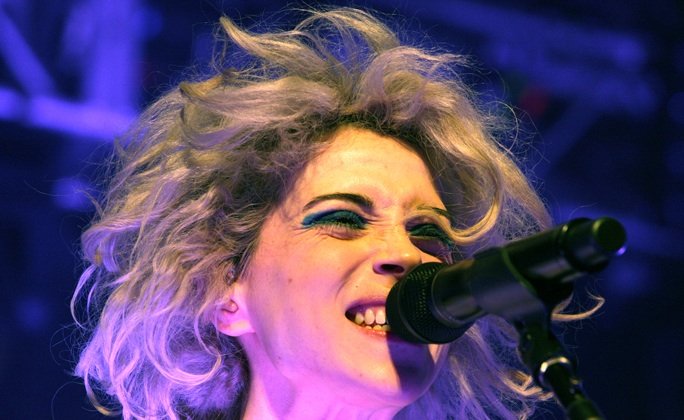 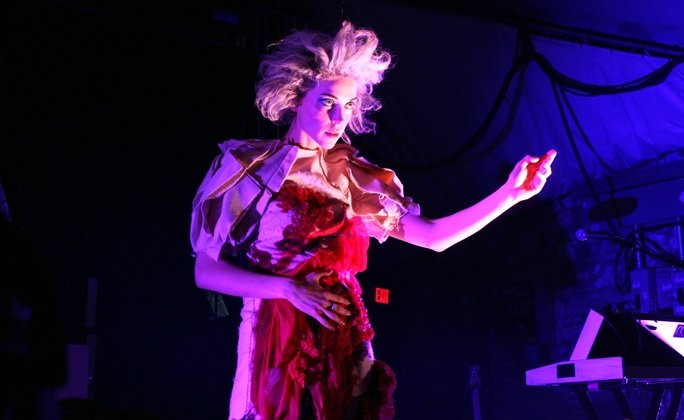 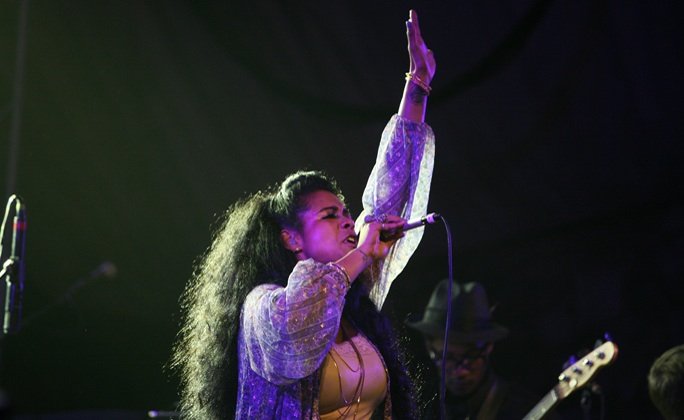 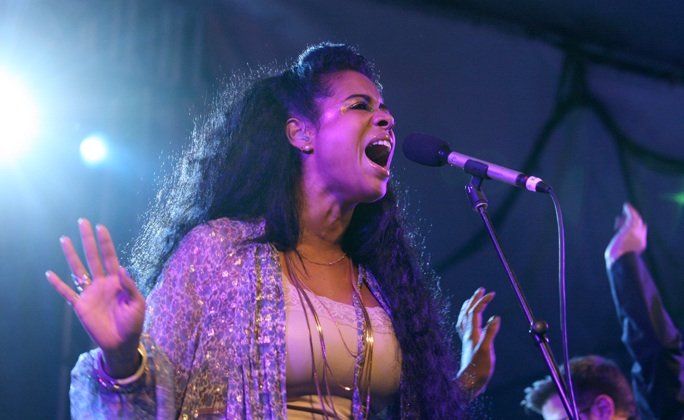 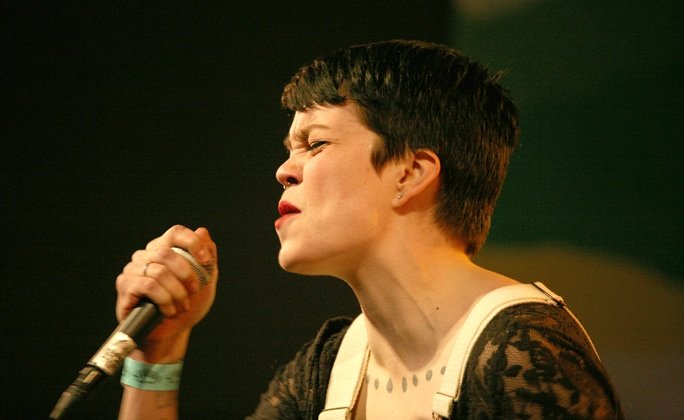 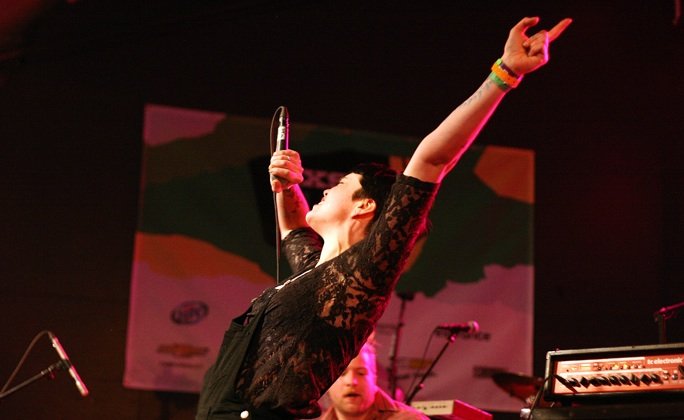 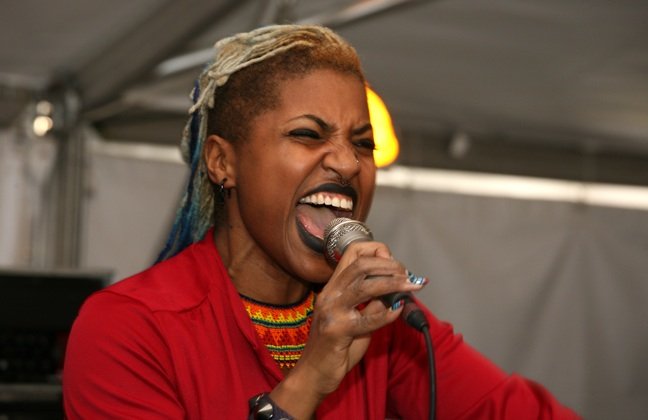 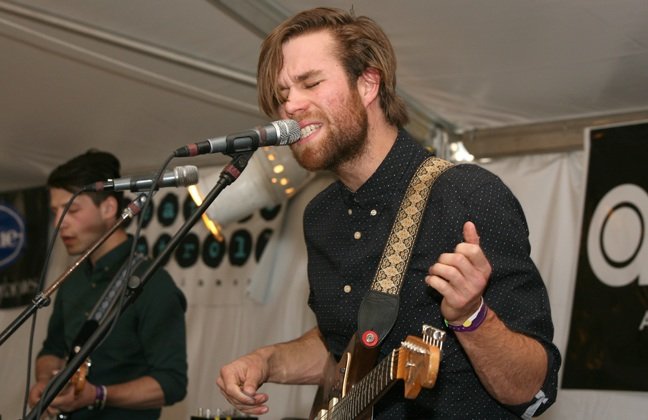 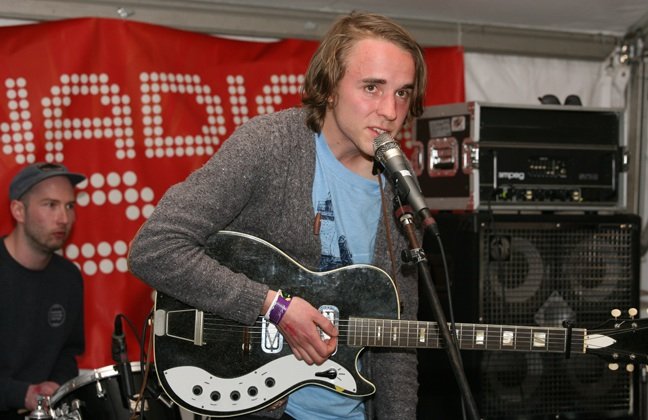 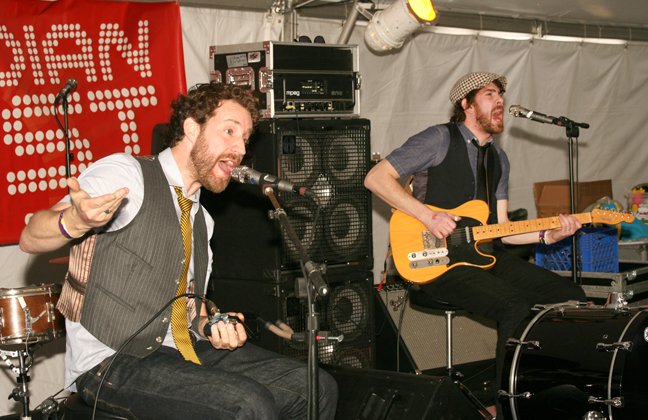 Tragedy struck Austin very early this morning. After midnight, a suspected drunk driver, who was being chased by police, ploughed through temporary barricades near the Mohawk club – a popular SXSW venue – killing two people, leaving five others in critical condition and injuring 23 in total. Almost immediately, festival-goers and their loved ones started reaching out to each other via text, Twitter and Facebook, making sure their friends were safe and sound. To say the least, it put the day and the entire festival in perspective. It seems ridiculous that lineups and lack of sleep were our main concerns yesterday.

Wednesday had otherwise been par for the course, which, at SXSW, means overstimulation wherever you go. I kicked off the beautiful, sunny (and windy!) afternoon with my countrymen and women at the Canadian Blast BBQ. I only managed to stay for the first half of Vancouver blues duo the Harpoonist & the Axe Murderer’s set, but would love to see a full show of their foot-stomping tunes in the near future (a Toronto date soon, please?).

But from further east downtown, Fader Fort was calling me. Not technically a SXSW event (anyone can get a wristband and get in, not just festival-goers), the Fort is one of the most hyped events in Austin, and like so many non-official parties this week, still feels like the most turnt-up place in town. It’s like an all-inclusive resort for music fans. Food, drink and shelter are all provided, plus a chance to decorate your own high-top Converse sneakers and bring them home with you. There’s a sheltered stage area, and further back, swaths of fake grass to stretch out on.

The carefully curated lineups, however, are the the Fort’s highlight, and speak to The Fader magazine’s hip-hop-heavy musical tastemaking.

The British psych-rock four-piece Temples were far more comfy than they were at the Horseshoe a few months ago – maybe it was the sheer size of the Fader stage, which gave them room to play.

Later, as fans in the crowd lit joints and bobbed their heads, Sage the Gemini and his Bay Area HBK Gang collective took turns at the mic. The sound was so much better than Tuesday’s hip-hop at the Warehouse, and singer/rapper Rossi stood out as one to watch.

As the afternoon crept toward evening, I was faced with one of those gut-wrenching music festival decisions: stay put and see a solid lineup (Big Freedia, Isaiah Rashad), or take a chance, run across town to watch Pusha T, and risk being left outside?

On this occasion, the risk was worth it.

Unfortunately, we stood outside as Dum Dum Girls threw down a set inside the now-infamous Mohawk bar – one of the best venues in Austin. Fortunately though, after they finished, enough people left to allow badge-holders inside. It quickly became body to body in there – even Tyler, the Creator was watching from the upper levels of the tiered, open-air space.

Pusha didn’t disappoint. The weather actually worked to our advantage, giving him a natural wind-machine effect to his braids when he was standing at the mic. Neck veins throbbing the entire 45 minutes, he combed his catalogue old and new, even throwing in a little Kanye West mini-set that culminated with Runaway, a surprisingly soft choice for someone who’s been known as a “coke rapper” (though there were plenty of mimed sniffs and allusions to that drug elsewhere in the set). Still, the only thing Pusha was pushing was his album, My Name Is My Name, which he said over and over, calling it “album of the year” at least ten times before the end.

After the general dinner/power nap hour that seems to go down around 6 or 7 each night, there were several hot, hot-ticket events. Kendrick Lamar and ScHoolboy Q at the iTunes festival Kanye and Jay Z at Austin Music Hall and St. Vincent at Stubb’s BBQ. Having had numerous opportunities to see the former three artists in the past year, I went with the guitar goddess St. Vincent, who also happens to be the headliner for Toronto’s own NXNE festival in June.

Before she went on, however, noise-punk trio Perfect Pussy ripped through an intense show. (Later, lead singer Meredith Graves was dancing to St. Vincent in the crowd.)

Then, slightly delayed, Kelis too the stage for an hour. Her low, smokey voice is show enough on its own, but the R&B singer brought along an 11-piece backing band, and performed a super-soulful set of covers (Feeling Good), originals, and yes, her massive hit Milkshake, which didn’t really fit with the rest of the show, but which Kelis gamely danced along to. (No Nas sightings, though her ex-husband does play Austin Hall on Friday. Hmm.)

St. Vincent finally came on just after 11, and was by far the most engaging performer I’ve seen so far this week. Rocking a mess of silver-lavender hair and what looked like a couture dress, she gave a theatrical performance of tunes, many from her just-released, critically adored eponymous album, including Rattlesnake, Birth In Reverse and Digital Witness. Almost robotic on her guitar (in the best possible way), St. Vincent was in kooky character the entire time, going limp like a marionette when the lights would dim onstage, then lighting back up for each number. Incredibly expressive.

We don’t know yet where St. Vincent will play during NXNE, but Yonge-Dundas Square would be an excellent choice.

I literally ran from there over the GOOD Music’s showcase at Brazos Hall to attempt entry. I was met with a long wait, but finally go in to what didn’t actually seem like a capacity crowd for Big Sean, who performed with labelmate Pusha T (Pusha! Twice! In one day!) and then went solo for some of his bigger bangers like Beware, Marvin & Chardonnay, Clique and All Me. On that last song, Sean raps “My new girl is on Glee and shit.” (That girl, now his fiancée, Naya Rivera, was in attendance.)

It was about then when social media caught on to the news of the terrible crash and the startling amount of injured SXSW attendees. Tyler, the Creator cancelled his show that was happening at Mohawk, and the tragedy could have something to do with why GOOD Music honcho Kanye West didn’t make his expected appearance where we were at Brazos Hall. Things will likely go on relatively as usual today, but with the sad, nagging reminder of how the reckless behaviour of one individual cost two people their lives and put a scar on an entire festival.