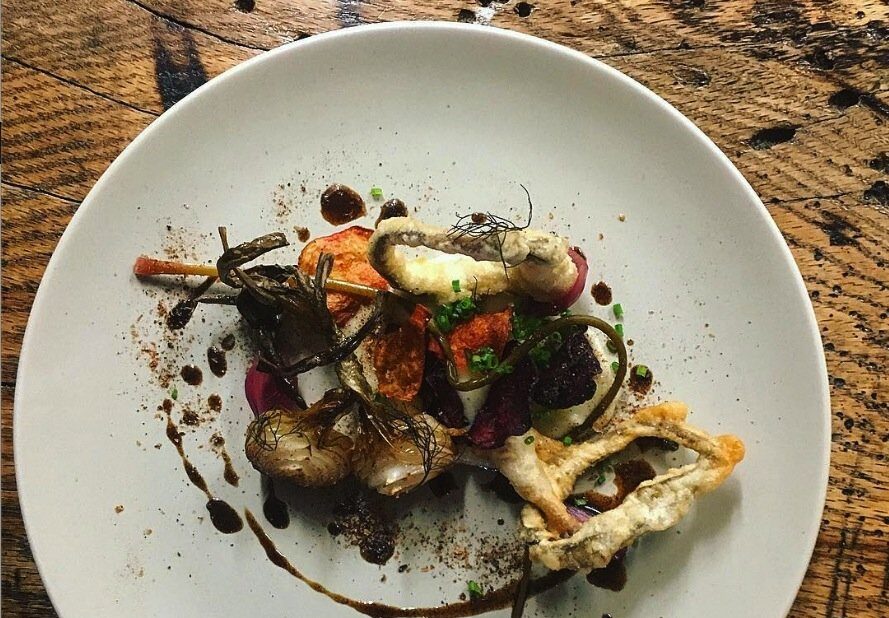 Dave Mottershall’s Queen West spot, NOW’s top restaurant of 2015, boasts not just one but two ever-changing menus – one with meat and one without. Expect the same inventive pairings (Parmesan egg and potato glass, white asparagus and sea buckthorn) and painterly plating that made the gregarious ginger chef Instagram-famous (@-chef_rouge, 48k followers and counting). Your best bet: bring some friends, then sample everything on the menu for a flat $100.

Though most upmarket restos have learned by now to leave the meat out of something on the menu, few spots make an effort to really roll out the green carpet. (Vegetarians have anniversaries and birthdays, too, you know!) Thank goodness for David Haman-’s rustic kitchen, which devotes half its menu to meat-free eats. Among his greatest hits: substantial hen of the woods mushrooms, ultra-rich French onion soup oozing with Gruyère, novel mains like apricot-glazed turnips, and fine house-made pastas.

Good things come in threes at former Susur sous Jay Carter’s innovative spot on Queen West. The ever-evolving menu is kept to just three options for three courses – and of those, one app and one main (plus the standout desserts) are always meat-free. Doesn’t sound like a lot of choices, you say? Perhaps not – but Carter’s mission is to let fresh veggies shine, dotting grilled asparagus with edible flowers (plus a nice dollop of hollandaise) or piling summer peas with artichokes and barley. The excellent complimentary sourdough bread course, baked in-house, doesn’t hurt either.

Stuck eating dry toast and fruit salad when you meet pals for brunch? You won’t be at this family-friendly diner on Roncy, which handily colour-codes its lunch, dinner and brunch menus with numerous vegan, vegetarian and GF options. Even with brisket, Bennies and burgers on the meat-eaters’ side, we bet they’ll be swayed in favour of tandoori squash quesadillas, “Hawaiian” stuffed French toast spiked with coconut rum, or a breakfast burrito packed with chipotle TVP.

Coconut milk, as it turns out, is just as versatile a base for ice cream as the real thing – and at this trio of creameries/chocolate shops, you might be swayed away from the dairy case in favour of vegan flavours like salted caramel, mojito, chocolate pomegranate, and pretty much any seasonal fruit the staff can get their hands on. Get ’em in scoops, in dark-chocolate-dipped ice cream bars or in massive cartons to take home and share (or hoard in your freezer).