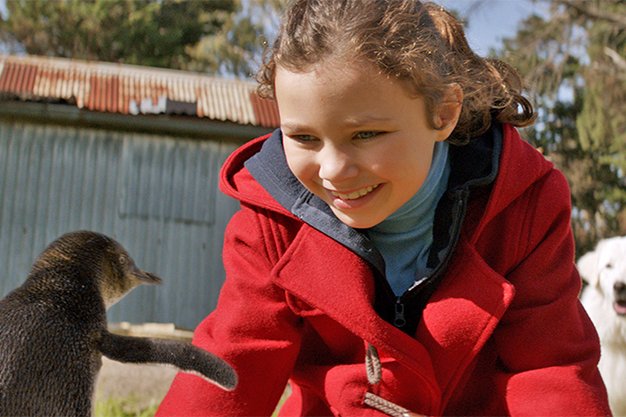 The TIFF Kids International Film Festival returns for two weeks of screenings calibrated for kids, tweens, teens and various combinations of same. Not sure you’re represented? Don’t worry, you are.

It opens Friday (April 8, 7 pm) with Oddball, an Australian comedy about a little girl and a magnificent but goofy Maremma sheepdog determined to protect a colony of fairy penguins from predatory foxes in the remote coastal town of Warrnambool.

It sounds like a typical children’s movie (Beethoven meets Happy Feet, maybe), but its pedigree is a lot weirder than that. It’s based on actual events, produced by National Geographic Films and has a script that bothers to give its characters much more definition and motivation than usual. Perhaps that’s how the producers got Sarah Snook, Alan Tudyk and the Sapphires’ Deborah Mailman for key roles.

The result is something much warmer than I expected when I sat down to watch it – a genuine family picture, even. A repeat screening is set for Saturday (April 9) at 1:15 pm.

Lesley Chilcott’s CodeGirl (Sunday, April 10, 4 pm repeats April 24, 12:45 pm) is a standout documentary about the annual Technovation Challenge in San Francisco, where girls from around the world compete for $10,000 in seed funding to develop and launch smartphone apps.

The act of writing code may not be especially cinematic, but watching groups of young women germinate ideas and collaborate on design and functionality is utterly absorbing. Chilcott intercuts the efforts of teams in California, Brazil and Moldova as they work to build socially relevant apps – and subtly illustrates how your location in the world shapes your perspective on what social relevance is. I’ll let you guess which team’s app filters out negative words in Facebook comments, and which team’s app advises users on the level of contamination in their well water.

Given the modest percentage of women in tech, a documentary -focused entirely on young female programmers feels inspirational and educational in the best possible way. In addition to the two public screenings mentioned above, CodeGirl has five school screenings scheduled over the course of the festival. That’s not enough. I want it running on a loop in the gallery.

Same goes for the 40th anniversary salute to Aardman Animations (April 17, 1 pm repeats April 24, 10:15 am). You may know the English stop-motion shop as the creator of Wallace and Gromit and last year’s TIFF Kids opener, Shaun The Sheep Movie, but it’s done so much more than that. That magnificent work is celebrated in a delightful program that reaches back to the very first hand-drawn Aardman cartoon and forward to the 21st century production Nokia: Dot, a short film shot with a camera phone’s microscope lens attachment.

And no salute to Aardman would be complete without the Oscar-winning 1993 Wallace and Gromit short The Wrong Trousers. If you’ve never seen it on a big screen, you’re missing out on joy. Get cracking.