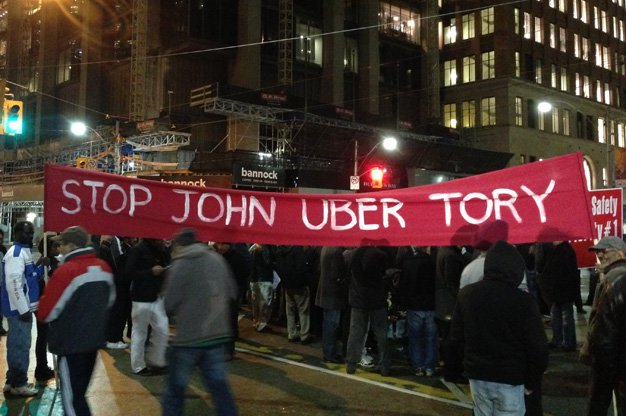 Toronto taxi drivers are gearing up for another protest against Uber that will shut down major roads downtown.

That the rally falls on one of the busiest weekends this month – on February 12 as the city prepares for Family Day long weekend and to host the NBA All-Star Game – is no coincidence. The only thing that could stop the planned protest is if city council decides to file an injunction against UberX at its meetings this week.

“If the protest does happen, it’ll basically be to show how incompetent the mayor is,” says Paul Sekhon, a general manager for City Taxi. “We’re hoping they’ll get the injunction this time and take some action.”

The taxi protest would be the second in nearly two months. On December 9, hundreds of GTA cab drivers rallied downtown, taking over the intersection of Queen and Bay and blocking traffic.

“We have 5,500 taxis in the city of Toronto. All the drivers are licensed,” he says. “As far as I’m concerned, Uber is another brokerage, but UberX is an illegal entity.”

It wouldn’t be the first time the city has tried to take action against Uber’s operations. Last year, a Superior Court judge denied the city’s bid for an injunction saying “the city failed to demonstrate a breach by the respondents of its bylaw.”

This came down to the city’s definition of a taxi brokerage. Uber has always defended its business as a technology, not taxi, company. Over the summer, city council amended its definition, effectively closing that loophole.

Josh Matlow, the only councillor to vote against an injunction at licensing committee, is not entirely convinced legal action is the way to go. Instead, he’d like to see Toronto follow Edmonton’s example, which became the first Canadian city to legalize Uber in January. In Edmonton, UberX drivers will have until March to obtain commercial insurance and Uber will pay the city $70,000 a year to operate. The program faces a six-month probationary period.

“I think the ultimate goal is to have a clear set of rules that are fair and equitable that everyone needs to work with,” Matlow says, adding that city council has set an April deadline for establishing Uber regulations.

Sekhon insists the Edmonton model won’t work in Toronto. For him, it’s all or nothing proposition. He says if Canada’s largest city doesn’t stop Uber, the cab industry that’s been in place for decades will be finished.