In the aftermath of #CropTopDay, we looked into what you can’t wear in Toronto’s schools 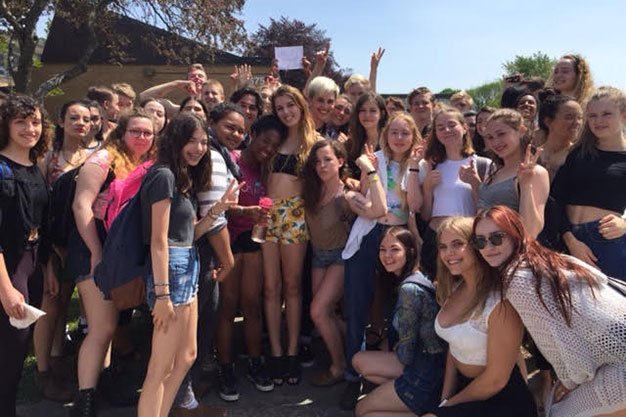 Alexi Halket designated May 26 Crop Top Day after being sent to the principal’s office for what she was wearing. “The problem isn’t what we’re wearing and how we express ourselves,” she wrote on the Facebook event, “it’s how society deems our bodies offensive.”

The reaction to the event was spirited, with people in comments sections on stories published on local media sites arguing about whether skin is distracting or if dress codes are sexist.

A male student in Ohio decided to test whether he would be told to cover up if he also came to class in a crop top. Jonah Hensley says that he was “immediately the centre of attention,” and was sent to the office and told to change – or else he would be sent home.

“I respect Alexi for standing for something, but after experiencing what she experienced first hand, I find no validity in her point,” he says. “I find both [of our dress codes] to be set up reasonably, and equally.”

But not everyone feels that way. Heather Joseph, whose 14-year-old daughter goes to Etobicoke’s Karen Kain School of the Arts, says that her daughter wore a spaghetti-strapped top in solidarity with Crop Top Day. “This apparently is not allowed even in 30 degree heat with no air conditioning at the school,” she says.

Joseph says that the teacher told all of the girls in the class — not the boys — to stand up, before walking around and measuring the length of their skirts or shorts and evaluating their tops. Her daughter was sent to the principal’s office and ordered to cover up.

And this was not an isolated incident. Her class has been reminded weekly about the “ever-changing” dress code rules. “She has been repeatedly dress coded in a manner that has singled her out in front of her classmates,” Joseph says.

In light of all of the controversy, we decided to see what the dress codes actually say is appropriate to wear to school.

The Toronto District School Board’s Appropriate Dress policy allows each individual school to set its own code, as long as a majority of parents at the school support it. Each code should include bans on “representations on attire that indicate gang affiliation” and discriminatory messages, but banning anything else — including crop tops — is up to each individual school.

The map below shows all of the TDSB schools with additional dress code rules (the red pins) posted on their website, as well as which of those schools specifically ban crop tops (the blue pins) or spaghetti-strapped shirts that expose undergarments (the green pins).

Many of the social media posts surrounding Crop Top Day criticized dress codes for sexualizing young bodies, or for blaming young girls for being “distracting” as they try to beat the heat instead of expecting male students and teachers not to ogle them. Does it look like the codes above are doing that?

When was the last time you went shopping in the girls department? Clothes this long are hard to find!

As you can see on the map, 74 per cent of school dress codes specifically ban crop tops, a form of clothing more commonly worn by female students. If dress codes were made with both genders in mind, you would expect for typical masculine skin-showing attire, like wearing pants below the waist, to be equally policed.

And then there’s the matter of enforcement. Even dress codes that don’t spell out what makes for inappropriate clothing can decide what that means on a case-by-case basis.

Halket’s own dress code at the Etobicoke School of the Arts simply reads:

“The school should be a great learning and working environment for all. So that we can all feel comfortable in our school/work environment, clothing must be respectful — it shouldn’t be too revealing or display inappropriate language. Students may be asked to change or cover up if their clothing is deemed inappropriate by the school administration.”