Mayor sits in a fucking chair, Internet fucking goes nuts and goddamn explodes all over itself 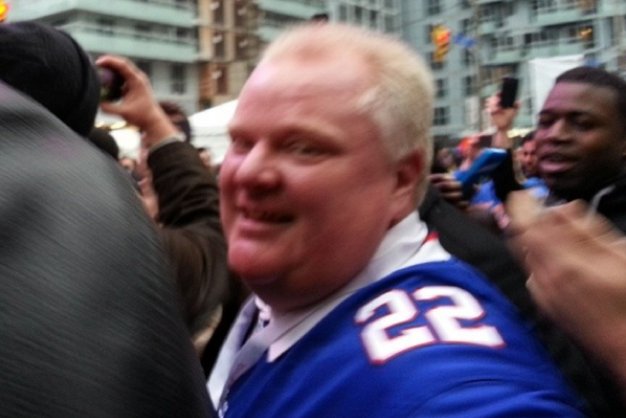 But the over-reported instance of Rob Ford maybe sitting in a seat assigned to Canadian indie rock musician Matt Mays at yesterday’s Bills/Falcons game at the Skydome is not really news. It was three tweets.

Deadspin reported the tweets. These are those tweets:

Rob Ford is sitting in my seat at the Bills game. He stole my seat. I don’t know what to do.

I’m by myself. I gotta kick him out right? I mean I would kick anyone else out… Am I wrong?

Got my seat back.

Not since Aeschylus has such rich human tragedy been wrought! A man in the wrong seat at a sporting event! Such rarefied error, less common than an honest lawyer riding a unicorn on the tail of Halley’s Comet! And lo, what luck that Mays had Twitter to communicate this splendorous narrative to a story-starved public! Ughhhhhhhhhh.

Today, in an exclusive interview with Indie88, Mays cleared the air a bit.

“It was quite the interesting day,” Mays told host Raina Douris. “I asked the guy, like the usher dude, like ‘Where’s my seat?’ He was a little apprehensive, like, ‘Rob Ford’s in your seat, bro.’ I waited it out. I wasn’t mad at all. I just thought it was really funny. I threw down a couple tweets and it just went absolutely bonkers.”

See? Not even Mays cares! And it was his seat!

Of course, the whole thing could have been a total coincidence, and not a dastardly plan by Mayor Ford to purloin a seat despite having another perfectly good seat to sit in, probably in the same section, if not the same row. Well, as Ford tells it, that’s precisely what happened.

According to the Sun, Ford sat in the seat assigned to him. “I just sat where security and the NFL told me,” Ford said. “Nobody said anything to us about it. Everyone was very nice to me.”

Come half-time, the mayor was asked by security to leave the row, due to the amount of people who were swarming the section to have pictures taken with him, and the resultant commotion. He was then taken to a corporate box. He says he ate three chicken wings.

That’s the scoop, gang! Breaking! News not news! The emperor is naked underneath his clothes!