10 Toronto makers you should know

Ahead of the Maker Festival’s two-day Maker Extravaganza, we profile 10 local innovators that should be on your radar 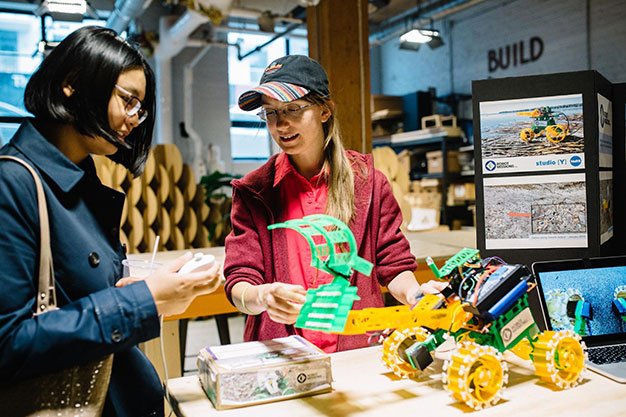 Erin Kennedy (aka RobotGrrl) will demonstrate her 3D-printed environmentalist robot at the Maker Extravaganza this weekend.

This weekend, more than 100 Toronto makers are taking over the Reference Library (789 Yonge Street), offering the public a rare chance to meet robots, play games and learn about cool creative projects that are being developed in this city.

The Maker Extravaganza is the Maker Festival’s marquee event. The month-long festival runs until July 17, which means there’s still time to check out a variety of hands-on workshops, panel discussions and community meetups.

The Maker Extravaganza is a free, all-ages event (online registration is recommended). To give you a taste of some of the projects that’ll be showcased, here are 10 amazing Toronto makers to watch out for.

Young roboticist Erin Kennedy, whose best known online as RobotGrrl, is the (human) brain behind Robot Missions, a project devoted to building robots for environmental missions. Recently, Kennedy raised over $10,000 on Kickstarter for her pilot project, a 3D-printed beach-combing bot capable of retrieving plastic waste in shoreline cleanups. Want to see the environmentalist robot in action? A field test open to the public takes place at Cherry Beach on July 6 at 7 pm. 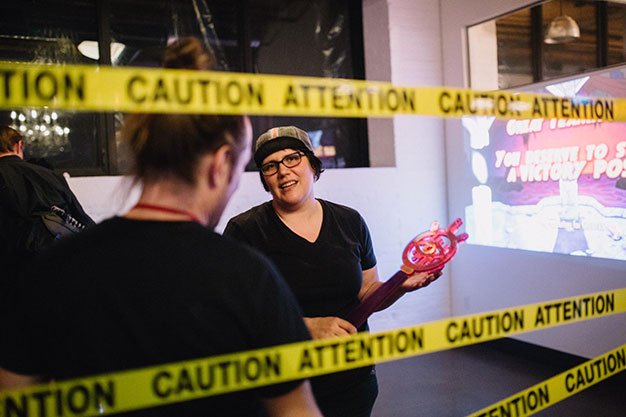 Technologist and designer Nadine Lessio is part of the Grove Collective, a group dedicated to exploring the intersection of art and tech. Along with Alex Leitch and Yifat Shaik, Lessio has been working on a motion-controlled robotic garden called Hothouse, which responds to human movement through the Toronto-made Myo wristband. Lessio is also part of all-women gaming collective Mahou Shoujammers, which created Punk Prism Power, a feminist multiplayer video game that uses heart-adorned chainsaws to battle an evil queen. 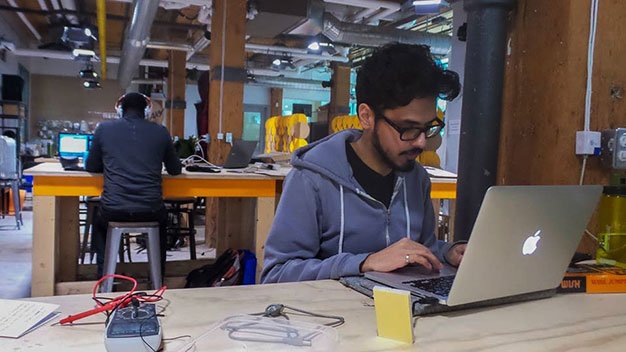 Through Toronto Mesh, Udit Vira teaches the public how the Internet really works.

Udit Vira is passionate about Internet democratization as part of the Toronto Mesh project. The group looks to disrupt established networks by building a community-owned DIY information network that will lower costs and increase public online access. To do that, everyone in Toronto Mesh functions as a connecting point for passing data. “The whole point is that it’s community owned. We need to make sure that if there’s someone providing Internet, it’s not at the cost at losing civic ownership,” Vira says. Toronto Mesh also works on teaching online literacy to the public. At the Maker Extravaganza, they’ll be building an interactive game that explores how the Internet really works. 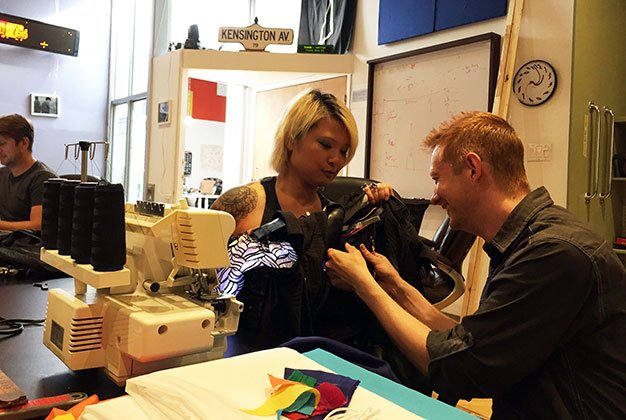 Partners in life and geekery, Eric Boyd and Wendy Ng work on multiple creative projects together. By day, Boyd is the president of Queen West’s makerspace Hacklab.TO as well as the programming director for the Maker Festival. Ng is a civil engineer who moonlights as an experimental fashion designer under the label Dystropolis. One of their projects together is Aurelia Aurita, a wearable “jellyfish dress” that’s illuminated from underneath. Another project called Soft Power uses galvanic skin sensors to detect the wearer’s stress levels and responds by deploying animal-like defense mechanisms. 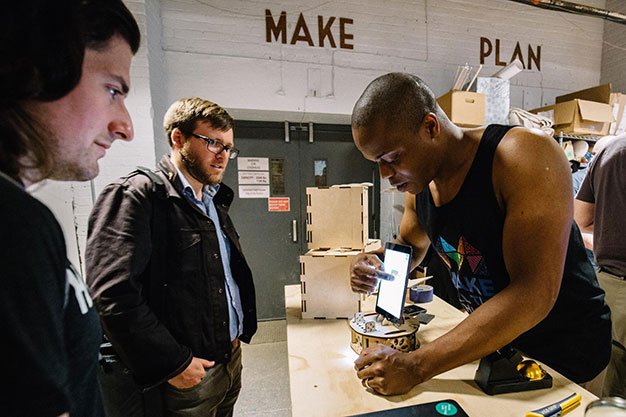 Robot Playtime is an educational robot toy that teaches basic programming and electronics to kids. Cocreated by University of Toronto grads Onome Igharoro and Alex Hong, the tech toy is made up of laser-cut wood sheets fabricated at Toronto’s STEAMLabs makerspace and integrates any smartphone, which Igharoro says “means it’s super convenient, familiar to kids and provides unlimited possibilities for extensions and upgrades.” Using Blockly-based programming language, students are able to make the robot move and display emotions on command. 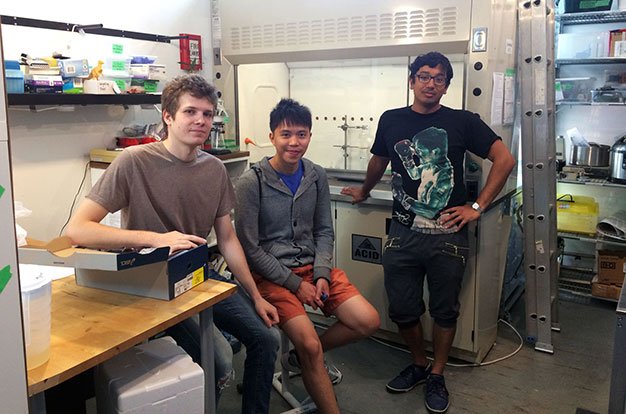 DIYBio is a group of biology hackers running a laboratory out of Parkdale’s HackLab. Members of the group are free to work on whatever bio-related experiments and research they want. Rana Chaudhri, one of DIYBio’s cofounders, says these types of labs are important because “it’s a way for hobby scientists to have a space where they can do their own work and be autonomous. No one is ever going to tell you if your project is a bad idea unless it’s unsafe.” The group has worked on everything from separating DNA sequences to making cells glow red. Frankenstein would be proud. 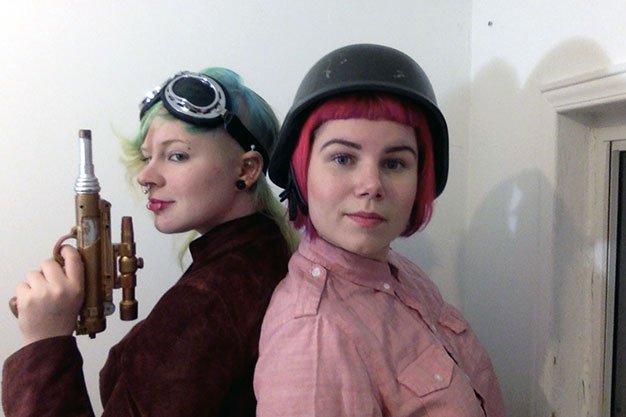 Creative technologists Lindy Wilkins and Hillary Predko met four years ago at a wearables meetup and have matching tattooes of lasers. These days, they help organize tech and maker community events, such as the Stupid Shit Hackathon, where people work on stuff that’s completely useless but fun. For example, Toastraits, which are laser-cut portraits of people’s faces on slices of toasted bread. They’re also organizing the MakeChange conference, which will focus on making and social change, at Maker Festival on July 17. 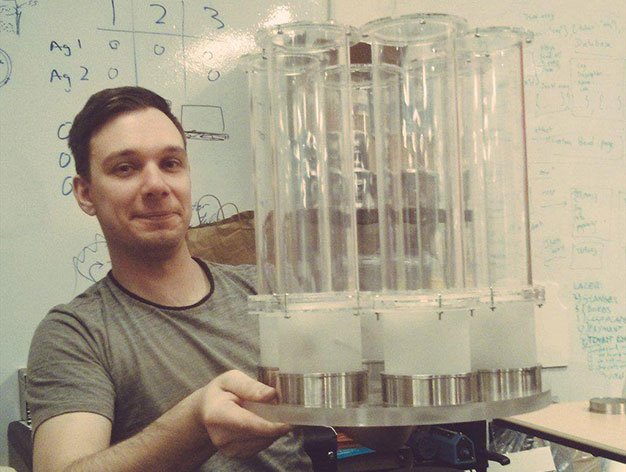 OCAD grad Irakliy Kontselidze is the lead industrial designer of TeaBOT, a artisanal tea-dispensing robot. The invention allows users to custom create blends of loose-leaf teas using a touchscreen or smartphone interface. Within a minute, their personalize cup of tea is dispensed. TeaBOT is actually on the market and can be found at various Toronto locations including the MaRS Atrium. Recently, grocery store 365 by Whole Foods in Los Angeles purchased a teaBOT, too. 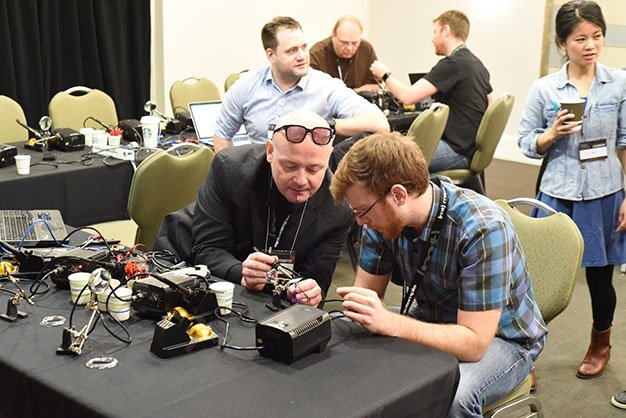 Creative Technologists of Toronto working on their Diorama-rama project.

Christopher Lewis is one of the cofounding members of Creative Technologists of Toronto, a collective working on physical and digital products for fun. One of their projects is Broke-Ass-Mariokart, a riding go-kart simultaneously controlled by 10 different people using an app. Another game, Pi Fighter 2, gets players to throw and dodge digital pies using brainwave and motion sensors. Why make weird things? “Even when the tools you make are whimsical novelties, ‘making’ is always about taking control of the technology around us, bending it to our needs and learning,” says Lewis. 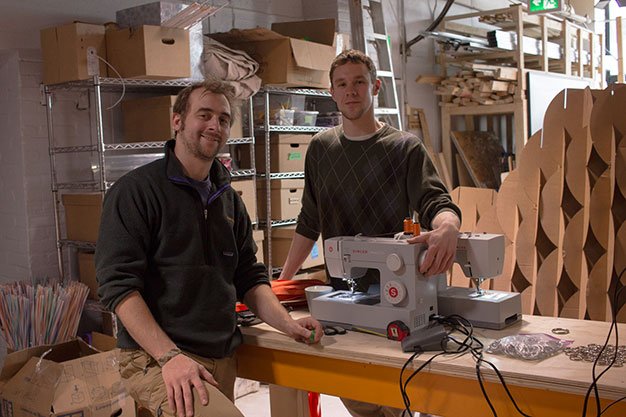 Cam Hagreen invented Sportspateria by accident a few summers ago. While paddling a ball back and forth two-on-two, a new game emerged where each player fended for themselves. “It’s like a mashup of ping pong, badminton and squash, but way, way cooler.” Hagreen says. After teaming up with friend Jessie Baguley, the two raised funds for Sportspateria kits through Kickstarter and have been sewing and laser-cutting the ropes and paddles required for the game at STEAMLabs in Toronto.