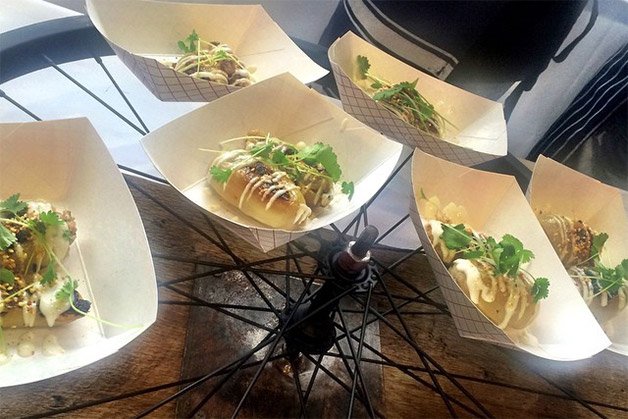 Admit it: change is scary. Yet we’re all driven toward it. Why?

Chefs, writers, restaurateurs and the hospitality industry explored this question on May 11 at the ninth annual Terroir Symposium, whose theme was Pioneering Change – Crafting The Way We Eat. It was a marathon of inspired talks.

Globe and Mail writer Ian Brown delivered hilarious quips about eating his way across Canada. It wasn’t all fine dining he ate some downright disgusting meals while seeking out the good ones. Twenty years ago, he said, you couldn’t find a decent lobster sandwich anywhere in Nova Scotia. Today the area is blossoming with chefs who are sourcing locally and cooking meals to perfection.

Hotelier Jean-François Archambault talked about La Tablée des Chefs, the food recovery program he started when he noticed how much waste was coming out of the Bell Centre in Montreal. The org now provides over 500,000 meals to Canadian families in need.

On the west coast, BC chef Ned Bell discussed how he uses his resources to educate consumers on the importance of seafood sustainability and the role we all can play. He encourages diners to choose Ocean Wise-approved fish in restaurants.

Many fisherfolk rely on the daily catch to provide for their families and keep local economies running. And this affects all of us. Don’t eat fish to extinction, he told us. Choose the ones that are plentiful so we’ll have enough for generations to follow. It’s everyone’s responsibility to develop an awareness of where our fish come from and ensure that we aren’t depleting the oceans. In Bell’s words, “We all need to give a shit.”

Keynoters Francis Lam, editor at Clarkson Potter and columnist for the New York Times Magazine, and Helen Hollyman, editor-in-chief of Munchies at VICE.com, explored change in their respective industries. Lam has the daunting task of predicting what will be popular in two years when the cookbooks he’s currently editing get released. Meanwhile, Hollyman has to combat the ADD nature of the internet so her content stays top of mind with her readers.

Despite the divergent media in which they work, they were both united by their quest for stories that audiences can connect with on an emotional level.

As part of Feast ON – whose mission it is to promote Ontario food and drink – we visited k2 Milling, a heritage mill in Beeton producing quality flour for local bakeries and cooks. This was followed by a standout, sprawling, communal feast hosted by Shaun Edmonstone with food by Feast ON chefs, a smorgasbord of delectable fare with locally sourced ingredients.

At the Terroir Dinner Series’ Ode To Beef, the Healthy Butcher’s Dave Meli surprised everybody by talking about the benefits of a grass and corn diet for cows. He changed my mind about corn feed as nutrient-deficient.

He assured us that all Healthy Butcher beef comes from cattle that have received a balance of nutrients, though not an all-grass-fed diet. It is actually the microorganisms in their grain mix feed (that includes corn) that the cows absorb, which supply them with protein, vitamins and organic acids. This ultimately produces a nicely marbled piece of meat. Their manure makes for a fertile field, and the grain-fed cattle he uses also receive nutrients from grazing on grass in the warm months.

In any event, the flavour was apparent in the beef he supplied for the meaty feast, prepared by chef Jesse Vallins of Toronto’s The Saint Tavern and chef Richard Turner of Hawksmoor in London, UK.

Terroir this year was an eye-opener. It was about the positive spirit of change and what can be accomplished by observing our surroundings and taking action to make circumstances better for all.