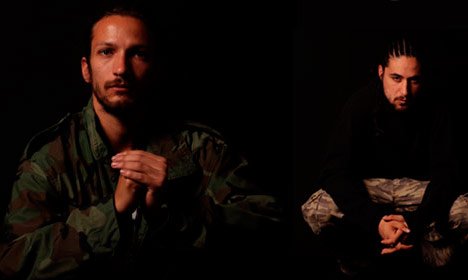 MCS ILLOGIK and TESTAMENT WERE NEVER SHOWN THE EVIDENCE AGAINST THEM

Sending rappers to jail over a music video seems a bit much — but not beyond the realm of possibility in G20-era Toronto.

Anarchist hip hop group Test Their Logik — back on tour after fighting conspiracy charges that barred them from seeing each other — says it happened to them during last June’s summit.

MCs Testament and Illogik, whose real names are Darius Mirshahi and Chris Bowen, were nabbed the Sunday of that handcuff-heavy weekend. Their “crimes,” as far as they can figure it, were hanging out with activists, planning to protest and making a rap video urging others to do so as well.

The lyrically and sonically intense “Crash the Meeting” — which has been viewed more than 50,000 times on YouTube — depicts rioting and property damage, and shows protesters with their faces covered. But planning to protest isn’t illegal, and their video isn’t hip hop’s first to depict criminal activity. So where’s the line?

One of Canada’s foremost experts on hip-hop culture, Dalton Higgins, isn’t aware of any Canadian cases where rap lyrics have been used as legal evidence, but said American prosecutors have faced difficulty in doing so for a few reasons.

“In America, the move to use the lyrics as evidence in a court of law this way is considered to be a violation of the First Amendment,” he told NOW. “For example, it’s very hard to prove in court whether the rappers in question have written some or all of the lyrics on the song or CD.”

On the morning of their arrests, Mirshahi was surrounded by OPP officers after getting into his car in the west end, while Bowen was yanked out of the prisoner solidarity protest outside the makeshift Eastern Avenue jail. They were brought to the same cage-like cell and say officer after officer kept mentioning their music and radical politics.

“Every guard there knew we were the rappers,” Mirshahi told NOW on Sunday, on the phone from a tour stop in Saskatoon. “One of them was like, ‘You are the rappers — you’re the ace of spades in this shit.’

“Why am I the ace of spades? Because I did a song? That’s ridiculous.”

They were eventually released, but not before seizing the opportunity to entertain their fellow inmates with their contentious track (which writer Tommy Taylor, in a nearby cell, described as a “brilliant moment for all of us in detention hell”). It would be their last performance together for five months.

Both men were charged with conspiracy, counselling others to commit an indictable offence and wearing a mask with intent – charges that were stayed in November before they were provided with the evidence against them. Until then, they had been forbidden to associate with each other as conditions of their bail – making it impossible to collaborate on new music or play shows.

“By the time I got it cleared I spent $4,000… That was my savings that I had planned for the whole year,” said Bowen.

A Toronto Police spokesperson said she had no information she could share on the arrests, while the Ontario Provincial Police said it was against the Police Services Act to speak about former suspects whose charges have been dropped or stayed.

Responding to why the men’s charges were stayed, a Ministry of the Attorney General spokesperson said, “The Crown has an ongoing duty to assess the strength of a case and determine if there is a reasonable prospect of conviction. In this case, the Crown determined that based on the evidence available, the case did not meet this test.”

Mirshahi and Bowen’s lawyer,Russell Silverstein, says his clients weren’t the only people who were arrested without reasonable grounds during the G20.

“There were a lot of people charged before anyone sat down and asked if they had sufficient evidence to prosecute,” he told NOW last week.

While stayed charges can be revived within a year of when they were laid, both rappers suspect they’re out of the woods for now and are thankful to be making music and moving on with their lives.

“It was a blessing in disguise in some ways,” added Bowen. “I knew in the long run it would make our message stronger.”

That message — one against authority, capitalism and corporatization — is paired with hip hop, dub step and house-influenced beats on Test Their Logik’s new album, “A.” They’ve been touring extensively before its May 14 release, and have a Toronto show set for Saturday, part of this weekend’s Anarchist Book Fair festivities.

When asked if they fear some may find their political leanings unsavoury, both were quick to defend what they see as one as an ideology based on equality and self-determination.<

“I want to make a world with as little violence as possible,” said Bowen, who is also a martial artist and yoga instructor. “But if people are upset by broken windows and not broken communities and broken people, then I really question their values.”

Test Their Logik performs with Unknown Mizery and Hobo Banditos at the “WORK” book launch party on Saturday, April 16 at 311 George St., 9 p.m.