Our holiday was a month and a half ago, but we’re still riding America’s turkey coma. Go to the movies or something 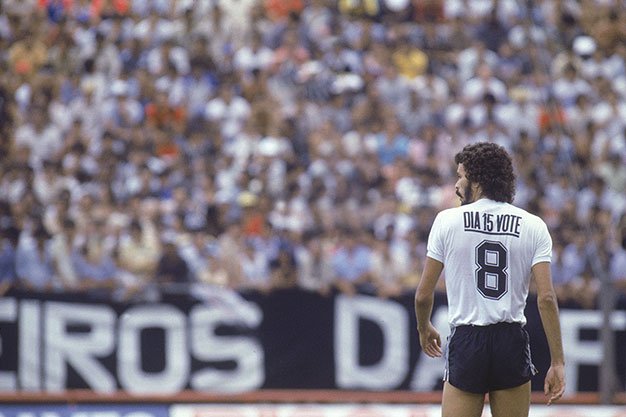 All of America has shut down for the Thanksgiving weekend, and Canada is rendered quiet by proxy there’s nothing new on TV, and all the big movies opened earlier in the week. Not that this has stopped Toronto’s independent screens from finding ways to keep us occupied, mind you.

For example: the Brazil Film Festival is underway at the Lightbox screening what can only be described as a whack of features and documentaries through Sunday (November 30). I’m particularly curious about Black And White Democracy, screening Sunday at 1:30 pm Pedro Asbeg’s doc looks at the intersection of sports culture, pop music and politics that occurred in the early 80s, when the Corinthians football team literally carried the banner for democracy in the final years of Brazil’s military dictatorship.

If you’d rather have something a little lighter on your Sunday afternoon, the Market Square Cinema is kicking off its Beer Film Festival, matching up three feature films with three breweries (and free samples!) over three consecutive Sundays.

The festivities kick off this week with a 4 pm show of The Adventures Of Bob & Doug McKenzie In Strange Brew, partnered with Amsterdam, which will offer a pre-screening beer sampling and “virtual brewery tour”, whatever that is. December 7, it’s Broken Lizard’s inexplicably beloved Beerfest accompanied by a Steam Whistle tasting and presentation, and December 14 pairs Mill Street Brewery with Edgar Wright’s apocalyptic bar-crawl adventure The World’s End.

Tickets for each program are $9.50, and are on sale now at the Market Square box office or online right here.

If the Blood in the Snow festival, running Friday through Sunday at the Carlton, doesn’t slake your thirst for Canadian horror, the Royal offers Gavin Michael Booth’s The Scarehouse for your consideration Monday (December 1) and Tuesday (December 2).

Shot primarily in a standing haunted house in Windsor, it’s a nasty little revenge picture with an almost entirely female cast, most prominently his wife Sarah Booth (who co-wrote the script with him) and The Colony’s Kimberly-Sue Murray and. It looks great, and this is likely the only chance you’ll have to catch it on a big screen, so go for it.

The week closes out with Evolution Of A Criminal, making its Canadian debut as this month’s Doc Soup offering Wednesday (December 3) and Thursday (December 4) at the Bloor Hot Docs Cinema.

Darius Clark Monroe’s very personal documentary finds the filmmaker digging through his own adolescence – and yes, that’s a premise that’s hardly new to the genre. But what’s different here is that Monroe robbed a freaking bank when he was 16 years old, and went to prison for it – and then, having done his time, entered the film program at New York University.

Evolution Of A Criminal started as a thesis but expanded into something much more complicated, with Monroe interviewing not just his own family and friends but his accomplices and victims, knitting testimonials and re-creations into a larger portrait of the environment and circumstances that led him to think knocking over a bank to help his family out of a financial hole might be a good idea, and showing us what he’s learned since then.

It’s a really intriguing project, and Monroe will be present for Q&As after “select screenings” I’d bet on him being around for both the 6:30 pm and 9:15 pm shows on Wednesday, maybe not for the 6:45 pm Thursday show. Tickets for all three can be purchased here.

And finally, I’d like to briefly lean on my position as the vice-president of the Toronto Film Critics Association and congratulate TIFF’s Piers Handling, who’s been named the recipient of this year’s Clyde Gilmour Award.

The award is reserved for those individuals who’ve made a profound contribution to the understanding of cinema in this country, and Handling certainly qualifies I’m delighted to see him so honoured for his life’s work, and the timing couldn’t be better on Monday, TIFF will announce Canada’s Top Ten for 2014, a project Piers founded. Check back here Monday night for our reaction to that.