That “unwanted kiss” is sexual assault 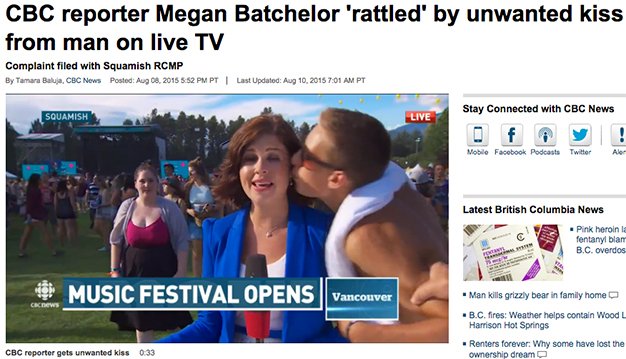 Editors across Canada keep getting it wrong: last Friday’s on-air attack on CBC Vancouver TV reporter Megan Batchelor was not “a kiss.” It was sexual assault.

The world finally grew to be disgusted by the FHRITP idiots, but the story was stuck on the “just a bunch of guys havin’ fun” narrative for way too long. And think about it, those fools didn’t actually touch the women they were harassing, like Batchelor’s assailant.

Headline writers across Canada participate in the good-old-boys, nod-and-wink world when they call an unwanted sexual advance on a woman at work “a kiss.”

Is a male walking up to a strange woman and wrapping his arms around her in a confining grab “a hug” or an assault? Is a man’s grabbing the butt of a woman unknown to him “a cuddle” or an attack? So is a man’s unwanted jamming of his lips on the face a woman he has never met while she is at work really “a kiss”?

Language matters and clearly a lot of processes have been at work over the centuries to apparently endlessly perpetuate male advantage and female oppression. “Little things” like calling a sexual assault a kiss are just a part of the problem, but clearly a bigger part than even well-intentioned editors realize.

I salute all women pursuing a career in the still very male-dominated media world, especially those starting out. And I deeply believe that when someone like CBC reporter Megan Batchelor is attacked while doing her job, she at least deserves the dignity of the event being described for what it is: a sexual assault while at work. It sure isn’t “a kiss.”

I ask all editors who have misnamed this story in their headlines or coverage to go back and correct it. And I’d also ask them to ask themselves how they could ever confuse an act of sexual assault for an act of love and affection. Sometimes a kiss is not a kiss. I look forward to the day when that is obvious.