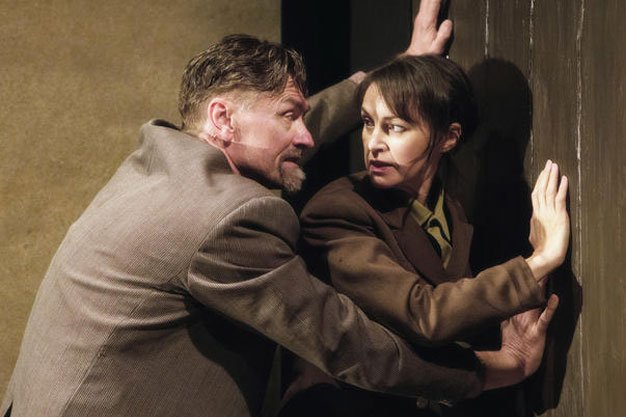 The interplay between guilt and mercy is at the centre of Kate Cayleys The Bakelite Masterpiece. Its lesson is that forgiveness, both for oneself and another, is difficult to obtain.

Though its narrative is simple, the play is eloquent, subtly shaped and offers a formidable confrontation between its two characters, a painter and an army officer.

More specifically, the painter, Han van Meegeren (Geordie Johnson), is a forger and the officer, Geert Piller (Irene Poole), an art historian investigating appropriated artworks. Its postwar Amsterdam, and van Meegeren is charged with selling a previously lost Vermeer painting to Hermann Goering. Piller accuses him of being a Nazi collaborator.

In his defence, van Meegeren says the work was his own, created using the modern plastic Bakelite to give the painting the look of age. The canvas was an artistic means of humiliating the gullible Nazis, making them look like fools in the eyes of the world. Hes not a traitor, he argues sardonically, but a patriot.

The play is a series of interviews between the two antagonists, linked by the painters monologues in which he expounds his philosophy of art and life. How can he prove that he painted the Vermeer, he asks? Hell paint another in the 17th century painters style, using Piller as his model.

Director Richard Roses production has a focused power that allows the characters to reveal themselves in carefully modulated scenes.

Johnsons reprobate blends sarcasm and cynicism with his philosophical worldliness and pride in having tricked the world. He may fear death he could be shot or hanged, depending on Pillers judgment but has no problem comparing himself to Lucifer, whose arrogance he sees as one of curiosity: can the Supreme Authority be deceived?

Pooles Piller is the more layered figure, revealing more and more about her background and needs as the contest with van Meegeren heats up. Watch the flash of emotions across her face as she studies van Meegerens new painting.

Pillers explosive outbursts are the more effective for their rarity. We come to realize that this Dutch resistance worker hopes for a new Holland, a new world, now that the war is over. Van Meegeren tries to convince her that, given human nature, perfection is unobtainable.

The painting that van Meegeren sells Goering depicts the Biblical tale of Christ and the woman taken in adultery, which ends with her exoneration when none of those around her will cast the first stone. Over the course of the play, both historian and painter stand in the position of the accused woman, looking for some kind of forgiveness and understanding of what theyve done.

Theres an element of grace in the plays open-ended conclusion, but its granted with an awareness that our shared humanity and doubt about our actions and motives can make life difficult to bear.

Charlotte Deans bare-bones set of table, chairs and painting implements is placed against a canvas-like backdrop, and Andre du Toit lights the action with an awareness of Vermeers soft shafts of horizontal illumination.