The Barr Brothers and Aroara at Lee’s Palace

Despite some uneven pacing, the harp-heavy Montreal folk band won over the Lee's crowd 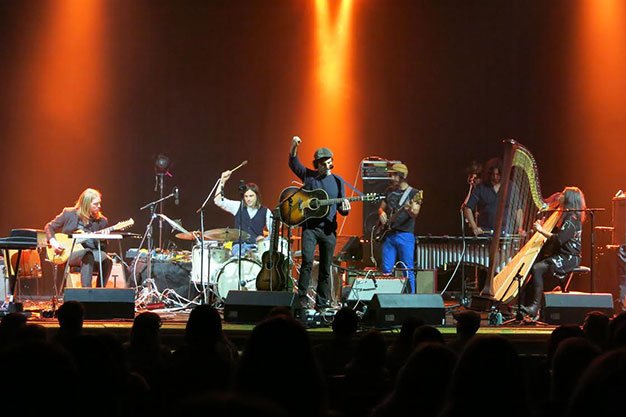 Usually a band hits their stride well into a lengthy tour, but if the Barr Brothers’ first show of a stretch of spring and summer dates was any indication, they’re clearly primed and eager to be out on the road again.

Fellow Montrealers AroarA, who share the Barr Brothers’ penchant for taking folk and blues in a completely unique direction, opened with a too-brief set that didn’t quite live up to their recent appearance at Lee’s in December, where they easily overshadowed headliner Cold Specks.

That said, the husband-and-wife duo of Andrew Whiteman and Ariel Engle never fail to mesmerize. Playing with a drummer (Liam O’Neil of the Stills and Eight and a Half) for only the second time in Toronto, the pair gave songs from their In The Pines debut a slightly different spin than in previous live outings, perhaps understandable given that album is now a few years old.

It’s rare to see a near-full house for an opening set, but many showed up for the duo, who wowed with their mutual guitar prowess and Engle’s powerful pipes. It’s testament to how deep AroarA’s talents lie that a guest turn by their pal Feist (who plays with them in sideproject Hydra) on guitar and backing vocals (despite a bout of laryngitis) merely enhanced rather than overshadowed. She and Engle harmonized beautifully on closing tune #14.

Any show that features not one, but two harps is going to be pretty special. And that was only part of the Barr Brothers’ extensive set-up, with organ and pedal steel also playing a large supporting role to frontman Brad Barr’s impressive guitar work, which anchored the 75-minute set. While he might serve as the linchpin, harpist/vocalist Sarah Pagé is the secret weapon, bringing texture and colour to their ever-shifting mix of blues, folk and rock, her fingers darting across the strings, plucking out gorgeous counterpoint melodies.

Colour-wash backlighting and Edison bulbs created an appropriately candlelit, moody backdrop to the heady tunes, mostly drawn from the band’s recent Sleeping Operator album. Every member of the sextet was given room to shine. Highlights included Joe Grass’s pedal steel solo in a rootsy run through Even The Darkness Has Arms, and Brad’s coaxing almost sitar-like sounds from his slide guitar on Half Crazy.

While there’s no denying the band’s collective virtuoso playing and obvious attention to songcraft, their proclivity for endless jamming (intros and solos often dragged on) and lack of any real attempt to connect with the crowd beyond the music (the dead air between songs only encouraged annoying loud chatter) made for some uneven pacing.

The best moments came when the band let loose, like during Brad’s Van Morrisonesque howl on Calm In The Water (and his subsequent soft-spoken quips about recently becoming a Canadian citizen) and a gentle acoustic take on How The Heroine Dies, the group huddled around one mic.

An encore can often be an obligatory exercise for both band and audience, but if there was any indication of how thoroughly the Barr Brothers won over the Lee’s crowd, it came in the form of one of the loudest, most enthusiastic post-set cheers in recent memory. As they closed with the stirring Lord, I Just Can’t Keep From Crying from their 2011 debut, it was clear the Barr Brothers’ music is meant for much bigger stages.