The Liberal candidate hoped to turn the discussion away from his record as police chief. At that, he failed miserably. 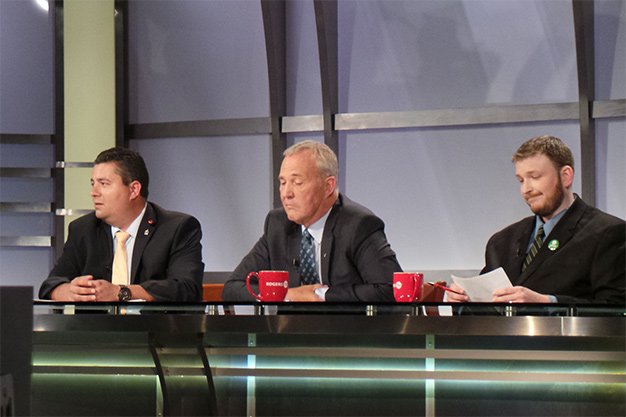 Bill Blair was surely quite uncomfortable: he’s a man unaccustomed to being held to account by those who are, in theory, his equals.

There he was in Rogers TV’s York Mills studio, sandwiched at a table between two fellows 25 years his junior, neither of whom had ever run a police force. Yet he had to answer to them, to justify his record and his party’s positions.

It must have driven him nuts.

Recorded Wednesday evening ahead of its airing tonight at 7, The Local Campaign debate for Scarborough Southwest was the first — and could turn out to be the only — planned face-off between Liberal candidate Blair, NDP incumbent Dan Harris, and the Greens’ Tommy Taylor, the latter of whom was famously a G20 prisoner. (Conservative Roshan Nallaratnam declined to participate.) They’d previously run into each other at a forum on co-op housing, but if that turned into a debate, well, it wasn’t the idea going in.

We’ll have a proper story next week, but in the meantime, these highlights will hopefully be as entertaining for you as they were for us in the studio:

Blair tries to deflect from carding, but it backfires

Blair, explaining why corporate taxes shouldn’t be raised: Quite often we’ll hear ideologically driven arguments. But we think public policy should be evidence-based. And it should be based on—

Taylor: Well, Mr. Blair doesn’t believe that, actually. Carding, for example, is not an evidence-based policy that he pushes. The science and evidence is actually against carding. The police are asked for their database material they cannot provide it on carding. They give anecdotal evidence as to, “Well, it helps solve this case or that case.” People across the country and across this province are calling for that. So when he talks about “evidence-based policy,” historically, on his record, that is, that is, not something that he pushes.

Harris: And Mr. Blair has liked to talk about the fact that “fear is the greatest danger.” But there you have him playing that fear card that if we dare to tell the corporations to pay more, that they’re gonna run away from Canada. They’re not gonna run away from Canada because we have a great and educated workforce. Because we have good social programs. Because we have good quality of life. Those are things that are value-added in the Canadian sector. You know, we have great internet, we have great services. That’s why companies come and set up in Canada. And, I mean, we do need to maintain a competitive corporate tax rate, certainly. But we’ve got a lot of wiggle room between what our tax rates are and what they are in the United States, which is our closest neighbour but also competitor for many of these jobs. And moving the rate from 15 back up to 17 per cent isn’t even as high as it was when Stephen Harper took office. But it will put billions of dollars back into the federal treasury that we can actually put to use to help people in Scarborough Southwest make end meets.

Moderator Cynthia Mulligan: Bill Blair, as the former police chief, would you like to respond to the carding issue?

Blair: I think it’s really important that we maintain this focus tonight on the concerns of the people of Scarborough Southwest—

Taylor: Who have talked to me a lot at the door about carding. And about Bill C-51. So please continue.

Blair: Tom has his issues.

Taylor: The black community is protesting in the streets, there are headlines in the newspaper. Why are you pretending this is not an issue?

Taylor: So the answer for the black community would be that carding is not relevant and your civil liberties are not relevant. Mr. Blair, over two million people in recent years have been stopped, the majority of them black residents in this city. There’s no data! Why do you defend it? Why haven’t you provided the data? I mean, you yourself, you hired a team of lawyers at taxpayer expense to look into carding. They were gonna give you an opinion on whether or not carding should end. You used taxpayer money for that. And you have never told us the answer. What did your lawyers say, that you paid for with our money, what did they say about carding?

Mulligan: I’m going to switch the conversation from carding, because we are discussing federal issues. Let’s switch to childcare.

Harris: I would have liked to have gotten in on that with them.

Mulligan: I’ll give you 10 seconds.

Harris: Thank you very much. When I go and talk to the folks in Warden Woods, they certainly have many of the concerns about their children’s future. But they have an additional one: and that’s oftentimes the fear of getting stopped by the police randomly. We have parents in those neighbourhoods who walk their kids to the bus stop, for fear of being harassed by police. And that’s fear that’s actually keeping people in their homes and away from being productive members of society.

Mulligan: We’ll give you a chance to respond, Bill Blair.

Blair: Thank you very much, Cynthia. If we’re gonna talk about when I was the police chief, we might as well talk about what we actually achieved when I was the police chief. I became police chief in 2005, and for the 10 years of my tenure, we created the most diverse police service anywhere in North America, one of the most diverse in the world. I had a rule in my police service that half of all the people that we hired would be women and/or members of our visible minority communities. My officers speak, two thirds of them speak two or more languages, one third of them speak three or more languages. We have worked tirelessly to improve the quality of our interactions with the community. We worked on a two-and-a-half-year project that was co-sponsored by myself and Barbara Hall, the commissioner of the Human Rights Commission, in order to improve our response and our interactions to ensure that all of our policies, procedures and training were compliant with the Human Rights Code. We have worked tirelessly, and we’ve been consulted by police services all around the world. I have never suggested that our interactions are perfect. I have always worked hard to do better. We believe better is always possible. The Toronto Police Service—

Taylor: Public trust in the Toronto Police has dropped by 20 per cent, and it’s never gone up during Mr. Blair’s—

Blair: Tommy, I didn’t interrupt you. The Toronto Police Service has worked to help make Toronto one of the safest and most livable cities anywhere in the world. We have consulted with committees with all the diverse communities, and our police service truly is representative of the diversity, not only the ethnic and racial diversity of this city, but the diversity perspective that it represents. I’m very proud of the work that the men and women of the Toronto Police Service do, and I have been committed throughout my entire career to ensure that our officers treat all people of our city and our communities with the respect that they deserve, that we uphold the rule of law, and that we keep them safe.

Taylor: People in this city actually are less safe thanks to Mr. Blair. The policy of carding, harassing innocent civilians, has made people and communities less willing to talk to police.

Mulligan: Okay. I believe we’ve made our point on carding.

Blair tries to poke holes in the NDP childcare plan, but it backfires

Harris: It’s only the NDP that’s gonna bring that cost down for families to a maximum of 15 dollars a day.

Blair: His party doesn’t have an answer [as to the costs]. Doesn’t want you to inquire. And quite frankly—

Harris: It’s gonna cost $5 billion. It’s been out for a year, Bill, you should have read about it by now.

Blair: Well, you probably have a pretty good idea of what it might cost. You just don’t have a clue where the money’s coming from, because—

Harris: From income splitting and from raising corporate taxes!

Blair: Asking the provinces to come up with 40 per cent and—

Harris: Done! It took me two seconds, and you still can’t answer about carding after several years.

Taylor: Which is an excellent point and very, very true. I think we’ve had enough of people who can’t answer questions in Ottawa, but please, Bill, continue.

Blair: But a plan for childcare spaces that doesn’t have a plan for actually paying for those spots isn’t much of a plan. It’s smoke. And the plan—

Blair tries to assert his financial bonafides, but it backfires

Blair: I’m the only one at the table who’s ever managed a significant budget and—

Blair (literally waving him off): Well, Tommy, you know very little about that budget, so I won’t debate it if you don’t.

Harris: That was quite the dismissive hand gesture there.

Taylor: Well, you don’t know much about a lot of things, apparently, like what your own lawyers told you about carding.

Blair tries to defend his party’s support for C-51, but it backfires

Taylor: Yes, well, I think “evidenced-based” is a word that keeps coming up, and we’ve seen it with Mr. Blair just not happen. And with the Liberal party on the whole. We can talk about carding or we can talk about C-51. Pretty much every civil liberties organization, numerous, numerous lawyers, experts on the Charter said C-51 is a disaster. And the Canadian Civil Liberties Association cannot say enough about this. And I know Mr. Blair will say, “Well, you know, maybe we’ll make some changes, and that’s the gamble that the Liberals took with Canadian civil liberties. “Hey, vote us in and we’ll make sure we change that thing we voted for!” They’re trying to hold us hostage. It’s absolutely ridiculous. It’s unnecessary laws that—

Mulligan: We have 30 seconds before we go to our closing statements. I’ll give you each 10 seconds to respond to Tommy.

Blair: Actually, I think the Canadian government has two responsibilities. They must keep their citizens safe. And they must always respect their rights and freedoms. Only the Liberal Party proposes to do that.

Harris: Well, Mr. Blair says he doesn’t think any of the powers and mandates of C-51 go too far, including week-long periods of preventative arrest, and we have somebody in the room here that’s experienced preventative arrest. And he’s no terrorist.

Taylor: Yes, I was arrested at the G20. And Mr. Blair has argued for C-51, the powers of expanded preventative arrest. I have an arrest sheet at home that says “preventative arrest.” There is no accountability and transparency. He wants to take it national. Very dangerous.