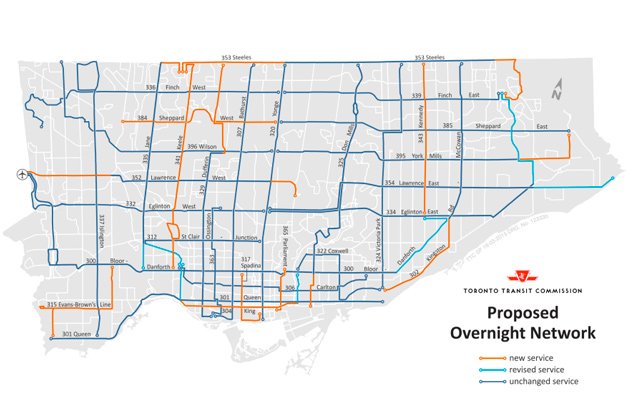 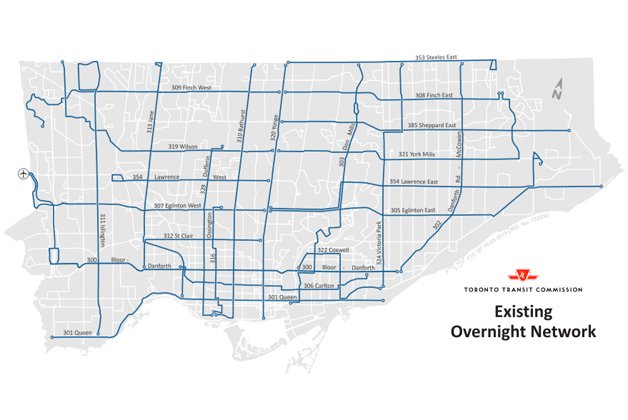 This afternoon, the TTC board approved a proposal to expand Blue Night service across the city, including the addition of two new all-night streetcars routes.

The changes kick in September 6 for at least a six-month trial period and will “expand the coverage of the overnight network so that 99 per cent of Toronto residents will be within a 15-minute walk of overnight service,” according to the TTC staff report [pdf].

If you live downtown or tend to find yourself there late at night, you should be happy to learn that the following will run every half hour:

• A new 304 King streetcar that will follow the same route as its daytime 504 counterpart, between Dundas West and Broadview stations, and will replace the current 313 Jane on Roncesvalles and 303 Don Mills on Broadview.

• A new 317 Spadina streetcar, also running along the route of its daylight doppelgänger, between Spadina and Union stations.

• A new 365 Parliament bus, that will run all night between Castle Frank station and The Esplanade.

• A new 312 St. Clair–Junction bus that merges the current all-night St. Clair service with the Junction-y part of Dundas currently being handled by the 313 Jane. The bus will go along St. Clair from Yonge to Jane, then turn down Jane to Dundas where it’ll head southeast to Dundas West station.

• A re-routed 325 Don Mills bus that will continue south on Pape, rather than turning at the Danforth to head down Broadview (where it will be replaced by the 304 King). It’ll switch from Pape on to Carlaw at Riverdale, then terminate at Eastern.

See a larger jpg of the new Blue Night map here. (And see this pdf for details on the rest of the changes, which include new all-night routes serving Evans–Brown’s Line, Keele, Kennedy and Sheppard West.)

Also attached to the staff report was a fascinating chart that shows the ridership for the current Blue Night routes. As you’d expect, Yonge is the most popular, followed in order by Bloor-Danforth, Queen and Carlton, with ridership peaking on Friday and Saturday nights (i.e., early Saturday and Sunday mornings). But we can probably learn something about the social habits of Torontonians from the fact that far more people use the Yonge, Queen and Carlton routes on Saturdays than they do on Fridays: 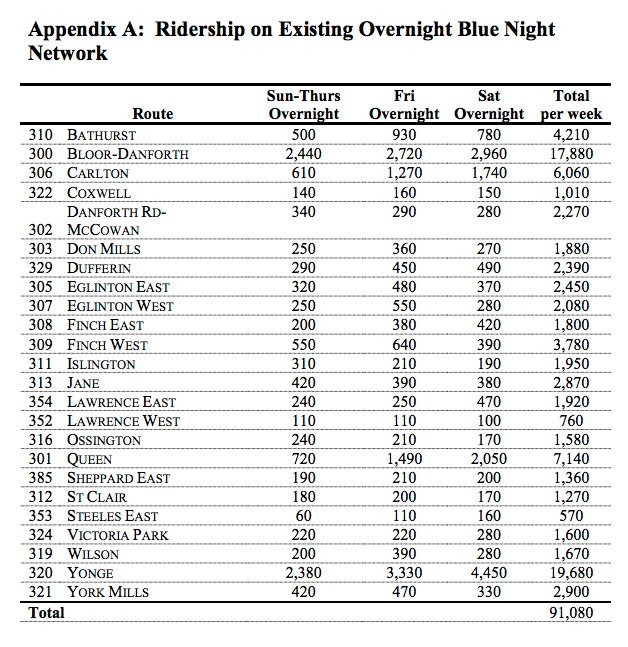