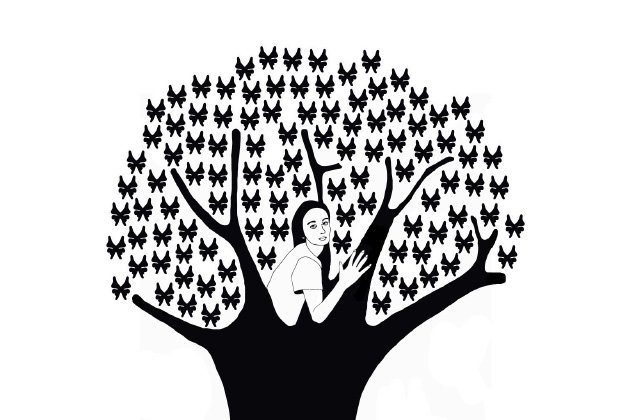 A little like her namesake, Julia Butterfly Hill – who got her middle name when a butterfly alighted on her finger and stayed there for a very long time – sat atop a redwood named Luna for two years in an act of civil disobedience.

Her treetop protest successfully stopped clear-cutting by the Pacific Lumber Company in part of California in 1999. Not just one 1,500-year-old, 150-foot-tall California redwood, but an entire grove of ancient redwoods for 200 feet around was saved from destruction by Hill and her ground team.

It’s no surprise that she sees butterflies’ pollinating work as a metaphor for her current mission in Toronto.

She and teacher Mark Morey are giving inspirational talks in support of the PINE Project, an initiative that promotes reconnection with nature for children and their families. I attended one of these talks at the University of Toronto’s OISE auditorium on Earth Day, April 22.

Hill says her “big awakening” happened while she lived in Luna.

“I realized that the world and the external landscape are the mirrors,” she says. They reflect “the wounds that exist within us first.” She believes that every issue in our lives “is a symptom of the disease of disconnection.”

She speaks loudly. Her voice is deep and barky and makes no concession to the microphone she’s using. She might still be talking from the top of that tree. The waveforms her voice makes on my recording device are four times the size of those made by Morey, her co-speaker.

You might think, from her Californian accent, that she’s a bit New Agey. But she’s not flakey. She urges those in attendance to do their best to occupy “the edge.”

There’s definitely a bit of a wounded tree spirit about her. She speaks of being a sensitive child with a violent upbringing and how that made her unfeeling and unloving. There’s something shattered and remade about her. That’s not surprising when you discover that her activism, which she calls “holistic health practice,” began after a steering wheel pierced her skull in a car crash.

“It woke me up to the importance of the moment and doing whatever I could to make a positive impact on the future. The steering wheel in my head, both figuratively and literally, steered me in a new direction in my life.”

That’s not to say she doesn’t also get off a few well-turned zingers, my favourite being “Don’t watch the television. Go out into the community and tell a vision.”

Both she and Morey do this ably, telling the vision of a powerful new healing energy arising from those who reconnect with nature, especially children.

The best imagery for the healing power of natural interconnectedness comes from the redwoods themselves.

“These trees grow to be 200 to 300 feet tall, and sometimes the roots only go 6 or 7 feet deep. How do they stand? They weave their roots together. They hold each other up.”

A year after she left Luna, someone sawed through two-thirds of the base of the tree. An expert on redwoods believed the damage was irreversible and expected most of the tree to die.

That hasn’t been the case. Thirteen years later, there is no significant damage. “Luna is covered in completely new green growth all the way around the tree every spring.”

How did Luna survive?

“I went back, and I noticed that when certain younger tree sprouts from the same root system were going through their growth spurts, they became stunted. And as I was sitting there meditating with the forest that day, I realized those trees were actually sending water and nutrients to Luna.”

If chaos theorists are right, hypothesizing that one small change can have huge impacts – that the flap of a butterfly’s wings can cause a hurricane on the other side of the world – there’s no reason to fear that Hill’s words won’t have an effect. There must have been 300 people of all ages at the talk, who will tell people who will tell people, and so the circle expands. It’s the butterfly effect.

Robert Priest is the author of Rosa Rose (Wolsak & Wynn), which contains a poem about Julia Butterfly Hill.