NOW MagazineCultureComedyThe calm behind the storm: Eric Andre brings his demented TV show to the stage

The calm behind the storm: Eric Andre brings his demented TV show to the stage 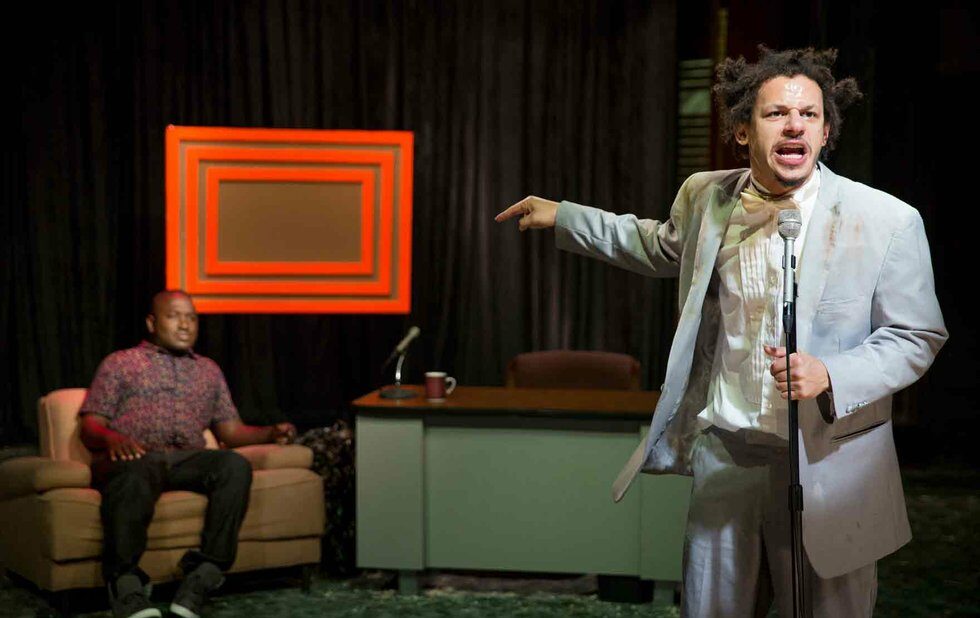 Every episode of the Eric Andre Show opens the same way: dressed in a grey, ill-fitting cheap suit, the comedian leaps into a set that looks pieced together from 80s game shows, home offices and Value Village and completely destroys it. He might use props, like a chainsaw, or just his body, to decimate everything in his path even the cheesy, onstage jazz band get tackled.

Each 10-minute episode is heavily edited, cut with the some of the most absurd and revolting interactions and performances television has ever seen. Fortunately, the live tour, finishing off in Toronto during TIFF, follows the exact same format sans sidekick Hannibal Burress, who is just too busy.

“Ill come out. Ill destroy everything. Ill do a monologue. Ill show some videos. Ill interview a few people from the audience. Ill interview guests, sing some songs,” he says on the phone from Los Angeles. “It’s like GG Allin meets Gallagher. Bring a poncho.”

(Seriously though: bring a poncho.)

Portland tried to murder me

Now in its fourth season, the most incompetent talk show host of all time has had a lot of success booking celebrities on the show (and because the live version is happening during TIFF, expect famous guests). Reality TV actor and designer Lauren Conrad walks out after he pukes on his desk, mid-interview, and then starts eating it. Germaphobe television host Howie Mandel doesn’t even really want to sit down in the hot-seat, once he sees how gnarly it is, choosing to stand up for most of the interview.

“The more famous they are, and the less they know about the show, the more ideal a guest they are,” Andre says. “…I’m not being malicious. I’m not a sadist. It’s fun to see real celebrities, high status celebrities, cope with a complete moron.”

While he says shooting the show can be therapeutic and cathartic (“I’ve got a lot of rage,” he says), it’s also completely draining. And for someone so into comedy that makes people feel uncomfortable, he’s got a successful career in the mainstream as well. Most recently, he plays Mike Scaggs, Jay Baruchel’s roommate in Man Seeking Woman, shot in Toronto, and you’d also recognize him from Popstar: Never Stop Never Stopping, 2 Broke Girls, The Internship and Don’t Trust the B—- in Apartment 23.

So what’s his secret?

“Trial by fire,” he says. “I was anxiety-ridden in my early 20s and so broke, and not taking care of myself and like, over-the-top hard on myself, putting pressure on myself. I got into meditation through yoga with my friend, and then started going to therapy and my therapist suggested meditation and it was such a great way to calm my central nervous system down. It was just… the misery. Everybody thinks your 20s are the best, but your 20s are the worst. Your 20s are miserable, broke.”

Now, before a show, he chugs water and Gatorade and eats bananas for potassium. He exercises in the morning before a work day, and crams in a meditation and journaling session before breakfast and dinner. He goes to therapy and gets a massage once a week, uses drugs in moderation, books girlfriend and friend time and tries to stay away from junk food.

“All of those things will make you more creative,” he says. “What you put out, you gotta take in too go to museums, movies, read you gotta get inspired, y’know?”

I made a playlist of songs I listen to while I write and/or jog. https://t.co/vVRRLCldFa

If you can’t get a ticket (last time I checked, Embrace had opened up the balcony because of high demand), don’t sweat it too hard. Andre is back in Toronto to shoot Man Seeking Woman this fall, so watch his Twitter for a last-minute announcement that he’s doing standup at Comedy Bar, Yuk Yuk’s or even the Underground Cafe near Queen and the DVP.

“I know Toronto like the back of my haaaand,” he says. “I’m up the CN Tower, drinkin’ a Jimmy’s every day. I love Toronto.”