The night may have begun with seating chaos and lots of raised tempers (the steep drink prices didn't help), but. 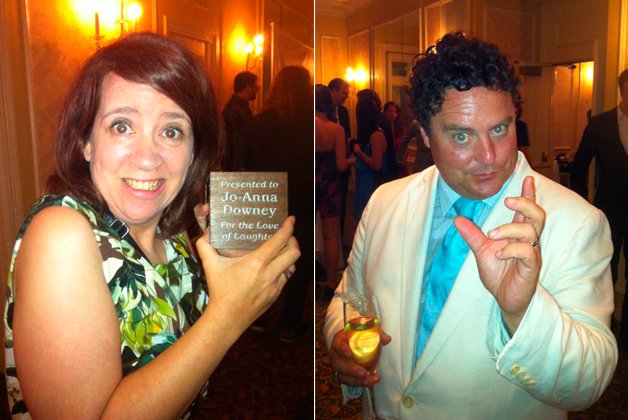 The night may have begun with seating chaos and lots of raised tempers (the steep drink prices didn’t help), but by the end there was a warm and fuzzy feeling surrounding the Canadian Comedy Awards on Sunday. That’s thanks mostly to the generosity and spirit of the community itself and the talents of troupers like Colin Mochrie, Gavin Crawford and Sean Cullen.

Held for the first time in a ballroom of the Royal York Hotel (that explains the $13 bevvies), it was a suitably lavish setting for recognizing the country’s funniest folks.

A shame confusion over seating charts delayed the show and caused massive sign-in problems a couple of tables were over-booked and some people were temporarily left standing or seated far from the stage, including MPP Michael Chan, who demonstrated a gift for comedy during his presentation of an award later on.

The situation was initially so uncomfortable, when producer Gary Rideout, Jr. came onstage and said, “The seating chart was very precise,” he got a big laugh.

Still, that was a minor bump in a show that, while a rocky and long ride, had a worthy destination. Comedy talent is rarely acknowledged in this country – unless, that is, they make it big in the U.S. So while I have a problem with the endless number of categories and some of the voting procedures, I like what the awards represent.

If there was a theme at this year’s CCAs, it was cancelled or unseen shows and movies.

All of the Best TV Show nominees (Almost Heroes, Michael: Tuesdays & Thursdays, Picnicface, The Debaters, Todd & The Book Of Pure Evil) were for cancelled shows, and the big winner in the movie category (I’m not sure why we should even including movie categories, to be honest) was for a film that few had seen or even heard of: Roller Town, which gets released nation-wide in late September but apparently is available On Demand and on iTunes (oops – only in the U.S., I just tried).

The talented folks from Picnicface took most of those awards, with members Scott Vrooman and Evany Rosen going up multiple times to the podium to accept and humbly tell people to watch their movie Roller Town, which was shot in four weeks.

Accepting the award for Best TV Show, Vrooman said: “It’s not even a glass half full situation. It’s all full. We got to do a TV show and we had creative freedom.”

The CCA’s host was genial sitcom star/TV host/writer Alan Thicke, and while his opening sermon (delivered in minister’s robes) had a shaky beginning, with unfunny jokes that were bizarre and a touch too self-important, he got over his MC growing pains quickly and soon got into the spirit. Proving he could make fun of himself as much as anyone else, he sent up his failed show Thicke Of The Night and offered this assessment of himself: “a modest talent with really good hair.” Big laugh.

Much better was the opening video of Rideout Jr. approaching Gavin Crawford to host. Inspired by Billy Crystal’s Oscar montages, where he inserts himself into the Oscar-nominated pictures, Crawford visited folks from the nominated TV shows, only to find them cancelled. Many bitchy comebacks about Crawford’s own cancelled shows (and his recently picked up, then dropped, CBC pilot) ensued. And then Crawford got the ultimate put-down: he got replaced by Thicke to host the actual awards. Clever.

Bob Martin, who won best performance by a male in a TV show (Michael: Tuesdays & Thursdays) said: “What a wonderful thing that we’re sharing this. I love that so many shows are cancelled. It’s a wonderful thing in its way.” It seemed like everyone knew what he meant.

And Lauren Ash, accepting her best performance by a female in a TV show (Almost Heroes) said: “It’s just so fucking shitty that [Almost Heroes] isn’t coming back. But it’s such a joy. If nothing else, we all have to celebrate the joys in our lives. When things feel impossible, find the joy.”

But the two most moving moments in the ceremony, apart from the RIP montage (that included Paul O’Sullivan, Joe Bodolai, Gord Paynter and Makesi Arthur), concerned the winner of the Phil Hartman Award and the Dave Broadfoot award.

Tireless open mic host Jo-Anna Downey accepted the Hartman award (for someone “who makes the Canadian comedy community better”) with five simple but profound words: “Thank you… and you’re welcome.” She got a standing ovation when her name was announced.

And Sean Cullen, who did a brilliant job hosting an occasional interview show at the side of the massive ballroom (worth it for his evisceration of schlub Kenny Hotz, who showed up in a grimy polo shirt), presented the Dave Broadfoot award for “comic genius” to Colin Mochrie, who seemed genuinely surprised.

Mochrie acknowledged the work of Broadfoot himself, told a joke and then sincerely pointed out the sacrifices of his wife, comic Deb McGrath, who put her own career on hold to raise their son while he was busy doing Whose Line Is It Anyway?

And then Mochrie thanked every improviser he had ever worked with, especially his good friend, the late Paul O’Sullivan.

It was a classy, heartfelt speech by a man who’s experienced the ups and downs of the industry and still has what we all love him for: a sense of humour.