The Canadian who shocked the White House 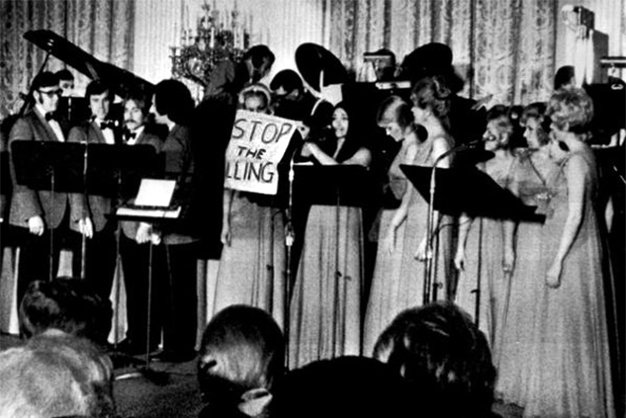 The gushing coverage of last week’s Justin Trudeau-Barack Obama “bromance” in Washington, DC, had one former Canadian visitor to the White House scratching her head.

When Cabbagetown-born Carole Addesso (née Feraci) attended the Reader’s Digest 50th anniversary party at the White House as one of the Ray Conniff Singers in January, 1972, she defiantly challenged Richard Nixon to his face over his ongoing war in Vietnam, Laos and Cambodia.

Addesso, by then a Hollywood veteran who had appeared frequently on The Smothers Brothers Show and sung with everyone from Johnny Mathis to the Doodletown Pipers, had been invited two weeks earlier to join the Conniff singers for the unpaid White House gig.

She originally turned it down, because “I didn’t want to sing for a man who’s killing people. But after thinking about it, I thought I should go and say something.”

Planned protest in mind, she found herself on a pre-show tour of the White House. Recalling the incident by phone from her home in Temecula, California, Addesso says, “We were in the Oval Office, and Nixon and his gang were next door in the war room planning their next moves in Vietnam, and I thought, ‘Man, I am so glad I am here.’ Thinking about what they were doing gave me a lot of courage to do what I was going to do.”

As the singers in elegant gowns filed onto the stage, Addesso pulled a handwritten banner from her dress that read “Stop the Killing.”

She then said: “Mr. President, stop the bombing of human beings, animals and vegetation. You go to church on Sunday and pray to Jesus Christ. If Jesus Christ were in this room tonight, you would not dare to drop another bomb. Bless the Berrigans and Daniel Ellsberg,” Addesso added, referring to two Catholic priests then in jail for destroying draft records and the whistle-blower who leaked the Pentagon Papers, the Edward Snowden of his day.

“I looked at him the whole time. Nixon was sitting there with a frozen smile, and he never bloody moved a muscle.”

After the first song, Conniff apologized to the audience, saying to Nixon, “I guess I’ll have to make sure from now on that my singers listen to your speeches. They don’t seem to know what’s going on.”

As cries of “Throw the bum out” filled the room, Martha Mitchell, the wife of U.S. attorney general John Mitchell, shouted out that Addesso should be torn “limb from limb.” Conniff asked Addesso to leave, and with typical Canadian politeness, she replied, “Certainly.”

She was taken downstairs to a room where secret service personnel, White House counsel John Dean and chief of staff H.R. Haldeman were waiting for her.

“Dean and Haldeman were just freaking out, and they kept saying, ‘It’s an incident, it’s an incident! We have to be careful how we handle this,’” she laughs. Both men would soon be facing their own questioning over -illegal actions in the Watergate scandal.

“Then they started questioning me. Is there [mental] illness in the family? Did I plan to kill the president? All kinds of dumb shit. I told them, ‘You didn’t hear a word I said.’”

The interrogation eventually ended and they called her a cab, even though that went against White House protocol.

“I was very calm throughout,” Addesso says. “I knew what I wanted to say, and nothing was going to stop me. I would do whatever I could to stop the war.”

Addesso became the subject of almost daily conversation at the White House, as we know since the release of the Nixon tapes.

“For the next three months, every day when they had their Oval Office meetings I was talked about. What is she doing? Is she going to sue us? They were worried I would start an even bigger problem.”

She found herself the target of the FBI and was constantly hounded by the press. Job offers dried up, and when she faced deportation to Canada, she received calls from the era’s leading civil rights lawyers, including Mark Lane and William Kunstler of Chicago 7 fame.

She has no regrets. She remembers being just outside Selma, Alabama, during historic anti-segregation demonstrations while on tour in the mid-60s with Johnny Mathis and the Young Americans, a racially integrated singing group.

“We were at a truck stop where they refused to serve the two black members of the group, so I said, ‘We’re not eating here,’ and we got up and left. A short time later, a big truck caught up with us and tried to run us off the road.”

As Addesso surveys the current American scene, she despairs at the widespread obsession with celebrity in American politics.

“I don’t get it. How could they go and feel like it’s an honour to be there when they’re sitting in a den of killers? It’s just crazy.”