Before DeRozan, there was Air Canada. The superstar left on bad terms, but his legacy lives on for Canadian ballers. 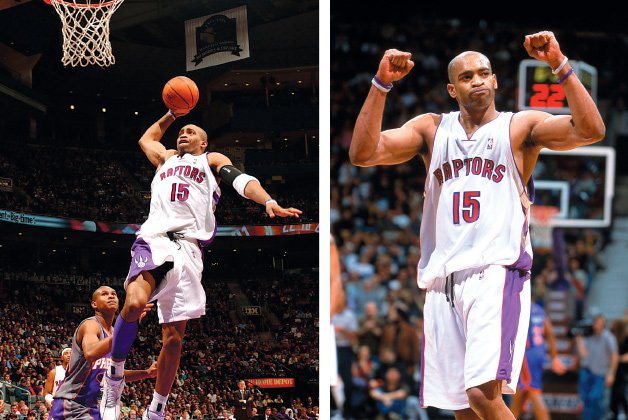 The Raptors good fortunes come at a prosperous time for Canada Basketball. After a string of one-off NBA players – for example, the one-time All-Star, 12-year player Jamaal Magloire (currently Raptors staff) the two-time league MVP, point guard Steve Nash – a flurry of Canadians are making noise in the draft every year. The country is now producing great ballers, and you can’t discount the role the Raptors franchise has played, especially in the GTA.

“A lot has changed,” says Magloire, leaning up against the wall of the team’s practice gym. “When I was in high school the Raptors were in their first year of existence and I didn’t get to see an NBA game. I didn’t see the Raptors play until I actually played against them.”

Younger Canadians, however, grew up on the Raps and Vince Carter.

When Carter was stunning the NBA community with the most legendary dunk contest performance of all time – in the year 2000, the same year he led the Raptors to their first playoff berth – Cleveland Cavaliers Tristan Thompson and Anthony Bennett were eight- and six-year-old kids watching from the GTA.

You can’t measure it scientifically, but it’s hard to dispute that The Carter Effect has been compelling.

“I always tell Vince when I see him, and people in Toronto, that Vince Carter was my Michael Jordan,” says starting power forward Thompson in January, from the Cavaliers’ pristine Cleveland Clinic practice facility, nestled in an Independence, Ohio, forest just south of the city.

“When I started watching basketball, Michael Jordan retired. So for me, watching Vince Carter and how electrifying he was in terms of his dunks and his presence in the league… everyone said he was the next Michael Jordan. He was the guy who made me fall in love with the game, made me think basketball was cool. My original love was soccer until Vince Carter came around.”

Thompson isn’t the only one who felt legitimized by #15. Overnight, North Americans were rocking the clean white and purple Carter jerseys of the early aughts.

“It was cool that everyone actually knew about Toronto because of his impact on the NBA – you know, in the dunk-off, and being the leading vote-getter [several] years in a row. It was crazy. It made basketball a cool thing in the city of Toronto.”

Same with first-overall pick Bennett. He did not, as it turns out, look up to fellow GTAer Magloire or BC wonder boy Steve Nash.

“It wasn’t the Canadians, it was probably Vince Carter [who made the difference],” says Bennett unprompted, post-practice. “He was from Toronto – well, he played on the Raptors. Just watching him play was crazy… the crazy dunks he did in games, that’s how Carter got me,” he says.

Sparked by VC’s theatrics and heavily involved with Canada Basketball, Thompson and Bennett are just two Canadians – along with the San Antonio Spurs’ Cory Joseph and the Orlando Magic’s Andrew Nicholson – who could lead our national team to world-class status, and hopefully, an Olympic medal in 2020. Podium or not, before long we’ll field an Olympic team full of NBA players, something Canada has never done before.

Both Thompson and Bennett will be in town Friday (February 21) when the Cavaliers face the Raptors. nba.com/raptors.