>>> Review: The Chasse-Galerie (The Flying Canoe)

THE CHASSE-GALERIE (THE FLYING CANOE) created by the company (Red One Theatre Collective). At the Storefront Theatre (955 Bloor West).. 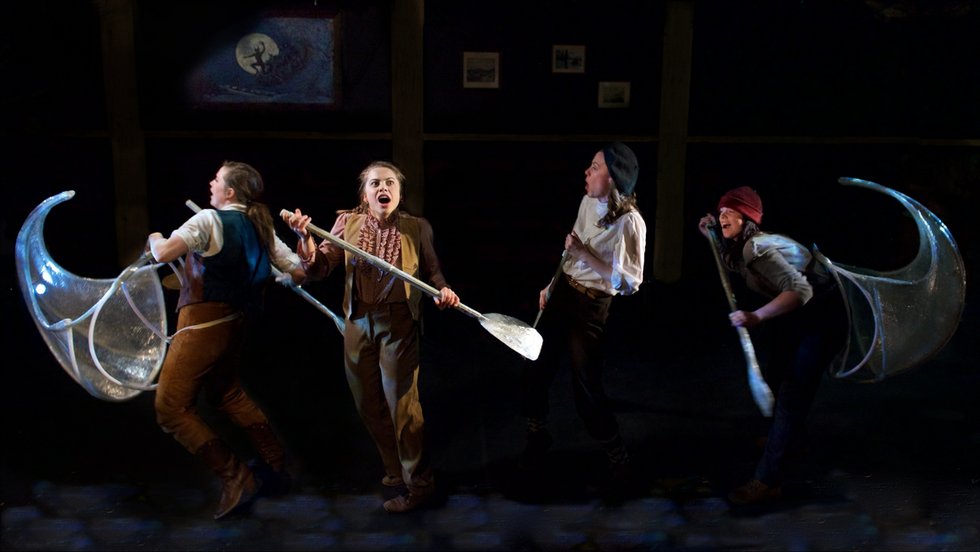 THE CHASSE-GALERIE (THE FLYING CANOE) created by the company (Red One Theatre Collective). At the Storefront Theatre (955 Bloor West). December 28-31 at 8 pm. $20-$25. storefronttheatre.com. Rating: NNNN

Tabernac, The Chasse-Galerie is an enjoyable, foot-stomping piece of theatre.

The collective creation, suggested by director Tyrone Savage and created by the company, draws on the French-Canadian folk tale about a flying canoe in which a quartet of coureurs de bois travel from their wilderness logging camp to Montreal on New Years Eve, intent on spending time with loved ones.

But the trip involves a deal with the devil, who makes them promise, unless they want to lose their souls, to be back by morning and have nothing to do with the church, either by touching a holy object or swearing, which for a Quebecer usually involves uttering religious-based words.

In this Red One Theatre production, which could easily become an annual treat, the four coureurs are women: the religious lesbian, Alexandra (Tess Benger), the rowdy, liquor-loving Michelle (Kat Letwin), Leigh-La, who learns that comradeship can be more important than love (Dana Puddicombe) and practical Toba (Shaina Silver-Baird), whos always wanted to be a fiddler. The roles are nicely contrasted, each actor rounding out her part with defining details.

Their seducer, Damien (Jonas Widdifield), with the help of a demon named Lucy Ferr (Vanessa Salazar), has little trouble convincing the women to fly away to the pleasures of the big city. There they meet, among others, the persuasively sexy Michel-Paul (Michael Cox), Alexandras girlfriend, Jaune (Alicia Toner), and a slew of talented musicians.

The last are important, since The Chasse-Galerie is a song-filled treat, with wonderfully entertaining tunes composed by James Smith, who also acts as musical director. Theres a memorable waltz-like drinking song, a yearning ballad about Montreal with a rhythmic Latin touch and a rollicking, singalong cursing number that ends the first act, viewers joining in and following a bouncing devils head that hovers over the projected lyrics.

The Storefront Theatre is set up alley style, the action taking place in the spaces centre and occasionally in the audience. Under Savages spirited direction, you never know where actors might pop up.

Theres lots of fine work, including that of Widdifield, whose devil is anxious to bring despairing souls to hell, and Salazars yes-woman of an assistant. Daniel Brieres puppetry, drawing on shadow images and hand puppets, adds to the magic and amusement, as do Holly Lloyds costumes, Bronwen Lilys set and (as is often the case at a Storefront show), Melissa Joakims lighting.

If theres one problem, its that several of the first acts scenes could be shorter we get the point of an episode early on and just want the action to move forward.

But thats a quibble given the energy and explosiveness of the evening, which involves humour and surprise and ties it all up with a bow of friendship.

The Chasse-Galerie was the last production I saw in 2015, and I couldnt have ended the year on a more entertaining note.