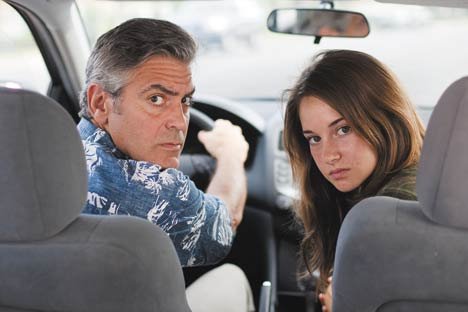 The Descendants gives George Clooney another fine role as a comfortable man shaken by the realities of life. Matt King is an easygoing Hawaiian lawyer whose world is destroyed when his wife ends up on life support after a brain injury.

Told she’ll never regain consciousness, Matt must prepare himself for her impending death and figure out how to break the news to his two young daughters (Shailene Woodley and Amara Miller). And then there’s also the revelation that she was cheating on him before her accident.

Alexander Payne’s first feature since Sideways treads the same prickly, seriocomic ground, focusing on a man who’s not quite as equipped to deal with the world as he believes himself to be. The subject matter plays more seriously, but Clooney’s textured performance pulls uneasy laughs out of the potentially miserable subject matter. The kids are terrific at the complicated emotional turns The Secret Life Of The American Teenager’s Woodley got all the buzz at the Toronto Film Festival, but the younger Miller more than holds her own.

As good as they all are, though, it’s Judy Greer who ends up stealing the picture with just three stunning scenes as a sympathetic spectator to the family drama. If Beatrice Straight could win an Oscar with a single scene in Network, Greer surely deserves a chance at a statuette of her own.