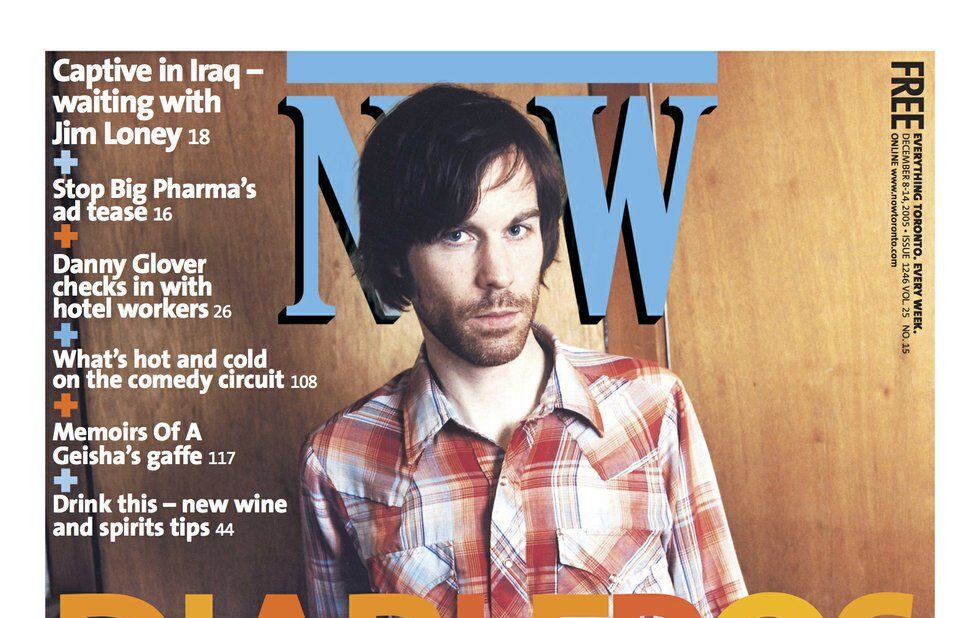 THE DIABLEROS with THE PATIENTS and GRASSY KNOLL & THE MAGIC BULLIT as part of Pitter Patter Nights at Speakeasy (120 Church), Tuesday (December 13), $5. thediableros.tv.

The Diableros don’t come from the current coolest city in Canada, they’ve never staged a brawl with members of a rival group, and they’ve got no plans to become a sprawling orchestral collective with countless satellite acts under their umbrella.

They’re not even signed to a super-hot indie label (the local jangle-rock six-piece independently released their awesome debut album, You Can’t Break The Strings In Our Olympic Hearts, barely two weeks ago), and they’ve never jammed onstage with David Bowie.

But despite – or just maybe because of – all that, the Diableros are going to become your favourite band in Toronto within the next few months. Nobody’s more shocked by this than the band members themselves.

“The weirdest thing that’s happened to us so far?” muses bashful frontman Pete Carmichael. “Probably what’s going on right now.” His bandmates, drummer Phoebe Lee, organist Matt Rubba, bassist Gary Leggett and guitarist Ian Jackson, all of whom (save for Farfisa queen Tara Huk, who couldn’t make it) are clustered around the coffee table in Carmichael’s apartment, burst into hysterical laughter while their buddy tries to clarify. “Not, like, in this interview or anything. Just the idea that people like this band and what we’re doing.”

“It’s just weird to have it all happening at once. I guess it’s because our CD just came out, but it seems like things are coming together really fast.”

Their utter lack of pretension is one of their most endearing traits. They’re sweetly unself-conscious enough to play their own album, a bubbly effusion of grinding organs, hazy guitars and delightfully fuzzy bass, on Carmichael’s impressive cobbled-together stereo while we chat.

And though they may claim to be flabbergasted by the sudden interest in their band, the individual Diableros have been quietly rocking out in small clubs for years. You’ve seen Carmichael crafting slacker guitar riffs in Stinky Records-signed Oshawa posse Another Blue Door. Rubba’s played in a handful of groups like Bellevue and the Airfields the latter is also where the Diableros found Jackson and Leggett. And the exuberant Lee’s been the secret percussion weapon in the likes of Suck My Disc-affiliated alt-rock act Prom Night Suicide Pact (once known as the Electric Shoes).

Ask why they think the Diableros are striking a chord that their other projects missed and the five members reach a quick consensus. “Chemistry, for sure,” Lee grins. “We all get along really well,” Carmichael continues, “and we hang out. Other bands go to rehearsal and then say, ‘Oh, okay! See you next week.’ We go out drinking after we play a show together.”

Watching the five laze about in Carmichael’s dorm-like pad, you can see that they have the easy playfulness of siblings, affectionately contradicting each other, cracking jokes about Lee’s imaginary sex trade past and finishing off Carmichael’s thoughts when he trails off (as is his wont). But you can’t throw a beer bottle in this town without hitting a band of “best friends.”

The Diableros’ real X-Factor comes from the fact that they make exciting, Velcro-hooky effervescent pop for real music fans – people who actually go to shows, not the ones who spend all their time at home trawling blogs for the next big thing or the ones who stock their iTunes with the soundtrack of their fave teen soap opera, and definitely not poncey critics.

As befits a band that was founded when promoter Dan Burke asked Carmichael to participate in a Jesus & Mary Chain tribute show, the Diableros build on a core of dreamy, fuzzed-out 90s college-rock influences. You can hear echoes of everyone from Frank Black to Robert Smith in Carmichael’s bristling, jittery vocals and non-sequitur lyrics, staticky traces of Sonic Youth, My Bloody Valentine and Galaxie 500 in their cotton-woolly guitars and even a stylish jolt of Stereolab in Huk’s jaunty Farfisa riffs.

They’ve also perfected the art of fitting unrestrained, anthemic epics into gleaming pop songs. Their heart-jolting melodies are accessible even when they swerve into unlikely progressions, and they have a vibrating, panicky energy that works as well on an album track like the sludgy oceanic blues of Tropical Pets as it does during one of their manic live shows.

“Our CD release at Sneaky Dee’s was probably the best show we’ve ever played,” says Lee. “It was the first time I didn’t feel like puking after we got offstage.”

“We had people pretending they were eating sandwiches while dancing,” offers Carmichael. “It was amazing!”

“Don’t forget the guy who took off his shirt,” Leggett joins in.

“And his pants! That was crazy,” Lee giggles. “It’s pretty awesome, though. I guess that’s the challenge. If you can get someone from Toronto dancing, you know you’ve achieved something.”

Rubba starts laughing. “Yeah, like you deserve a Nobel Prize for body movement.”

For now, goading Torontopian head-nodders into shaking their asses is at the top of the Diableros’ to-do list. Though You Can’t Break The Strings In Our Olympic Hearts is the sort of remarkable debut that sounds like it could instantly transform the band into indie scene stars with clever marketing machinations, Carmichael claims they’re not itching to sign a label deal – at least not till they do a helluva lot more research.

“No bands are making money from their record sales these days, unless they’re U2. We’ve been looking into distro, but if your record gets national distribution you have to tour all across the country to support it, and where do you get the money to put gas in your tank? I’m not independently wealthy.

“I don’t know what different labels offer their bands,” Carmichael continues. “Steve Malkmus has never called me up to say, ‘Hey, this is a really good label, Matador! I get this much money!'” He half-smiles. “I really don’t know. I’m kind of oblivious to the industry.”

It’s kinda nice to hear a band more concerned with hanging onto its core lineup (since the band’s inception in the spring of 04, members have disappeared like socks in a dryer) than trying to catapult toward Coachella-fest stardom.

That’s not to say the Diableros don’t have a pretty healthy following in certain circles – namely the circles that include the grimy, sticky-floored rock renegades championed by Burke, for whom the Silver Dollar serves as a de facto clubhouse. Though their melodic hearts may seem to have more in common with the more eclectic indie-pop leanings of Wavelength’s long-running Sunday-night series than with Burke’s beloved brand of greasy garage rawk (Burke brought the Gris-Gris, the Mystery Girls and the Lost Sounds, whose T-shirt Carmichael proudly sports during our interview, to town), the Diableros are much more at home in the latter scene, though they’re hard-pressed to pinpoint what separates the two.

“I don’t know if it’s the bands who are consciously trying to sound a certain way or participate in a certain thing,” argues Rubba. “I think it’s the bookers.”

“Maybe the quantity of beer?” offers Carmichael. “We’re all, like, big-time beer drinkers. Dan likes rock ‘n’ roll bands, so I could see him booking Final Fantasy or something like that, but it wouldn’t be something he’d do first.”

“I think he goes for really good live shows,” adds Leggett, “things he can dance to.”

Make no mistake – there’s no enmity between the loosely defined groups (which are themselves just two of the divergent factions bubbling below the surface of the city’s mainstream cultural community). Though some might claim the local scene’s fragmentary nature harks back to the cliquey vibe that characterized Toronto in the 90s, it seems more likely that having diverse, thriving pockets of talent is one reason our current pool of indie music is at an all-time peak.

In fact, the Diableros name non-partisan crossover crew Jon-Rae and the River, whose first Toronto country-soul jamboree was booked by Burke at the Dollar and who’ve since gone on to play Wavelength birthday parties, gigs for Eric Warner’s Over The Top fest and many more random shows, as their favourite live pairing.

That doesn’t mean they won’t pick a team when pressed.

“I’d side with Dan if it came down to, like, a soccer match or some kind of physical competition,” Lee shouts. “Man, in a fight, I’d pick Dan over the Wavelength kids every time.”