NOW MagazineNewsThe end of an era

The end of an era 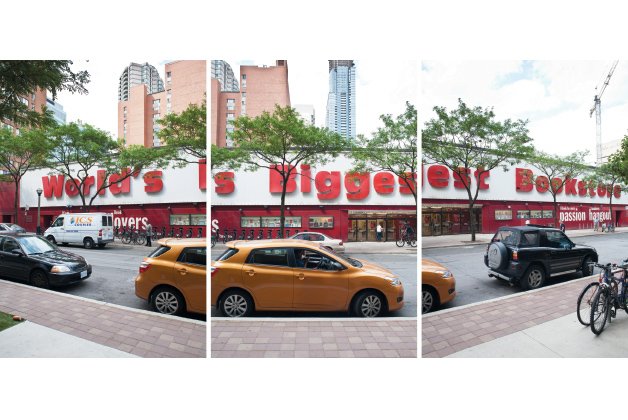 Rachel McMillan would drive for two hours with her father from Orillia to spend hours in the World’s Biggest Bookstore when she was small enough to believe it truly was the biggest bookstore in the world.

“It’s a book lover’s dream,” she says of the massive paper jungle that sprawls over three floors and 27 kilometres of shelves.

After 33 years tucked away on Edward Street, the store is shutting down March 23, to be replaced by what Lifetime Developments is calling a “restaurant revolution.”

WBB became a Toronto landmark, but for its employees it was a special club the entire community was welcome to join.

“Customers came back not only for the books but for the people in the store,” says former employee Sarah Khan. “It was like family.”

Entrepreneur Jack Cole of the Coles bookstore chain opened the store in 1980 to join other landmarks in the area such as A&A Records and Sam the Record Man just around the corner on Yonge.

The flashy signs and iconic oversized discs gracing those storefronts are now gone, and the kitschy, seedy Yonge strip has been sanitized by chain retailers and Ryerson University’s expanding campus.

From the corner of Yonge and Edward, pedestrians looking west can still see the twinkling lights around the bright red letters: World’s Biggest Bookstore. It’s the only sign the store has ever had, and it’s past its prime: some bulbs are burned out, and parts of the B and O are missing.

Still, McMillan gets a tingle when she sees it. For her it was a sanctuary when she moved here to study at the University of Toronto. “The first thing I did after my first class was go to the World’s Biggest Bookstore, because it was a safe space,” says MacMillan. She worked there for four and a half years, but not just anyone could get a job.

“You’re walking into a place where people are there because they’re passionate and because they actually know a lot about the books they’re working with,” she recalls.

Even now, a staff member is never more than a couple of shelves away. When a patron asks where to find something, employees answer with such familiarity it’s as if they’re guiding someone through their own home.

“It was a culture where they hired people who were really knowledgeable about books,” says long-time customer Karl Mamer.

For years, Mamer’s Saturday ritual included a visit to the store. With the rise of retailer websites such as Amazon, he doesn’t visit as often. “They are the victim of technology,” he says. “I think they are a relic of the past, but I’m not one who lives in the past.”

Mamer is right. The World’s Biggest is a monument to a bygone era, with its fluorescent lights, highlighter-yellow walls and the ever-present smell of printed paper. The looming end is apparent everywhere: cardboard boxes overflowing with books, red signs flagging what’s on clearance, and a large blue banner announcing the closing date along with addresses of nearby Indigo and Chapters locations.

The store has been under the Chapters umbrella since Coles and SmithBooks formed Chapters Inc. in 1995. Indigo has been leasing the site since its merger with Chapters in 2001, which formed Canada’s largest book retailer.

Kat Chin, a former employee who started working there at the time of the merger, says the spirit of cooperation shifted after the change in management.

“We were very welcomed to give suggestions, and management always took our suggestions,” says Chin. “Then it became disheartening and you didn’t really feel like the employees had a say any more.”

The World’s Biggest is one of many T.O. booksellers, including the Toronto Women’s Bookstore, David Mirvish Books and Nicholas Hoare, that have shut their doors in recent years.

When Khan visited the store recently with her boyfriend, whom she met while working there, the sight of half-empty shelves and few customers was depressing and unlike the “crazy busy” Saturday nights she remembers from years before.

Says Khan: “We had customers who would come back specifically for particular employees because they had a rapport with them.”

Some employees, like George Wong, have worked there for decades.

Khan recalls how Wong, who couldn’t be interviewed due to Indigo’s corporate policy, was a familiar face for customers.

“People would come in and give him cakes on his birthday and make him baked goods on Christmas – just customers who had been coming to the store for years and years and had always seen him,” says Khan.

It’s this tight community that will be missed when the bookstore closes. “It’s not going to be the same without it there, because it meant so much to so many people,” says McMillan. “It’s hard to say goodbye.”