The end of sports shame in Toronto

Everyone loves a winner. The Raptors are heading to the playoffs, the TFC is looking good, and Toronto is in love with the powerful Blue Jays. But successful teams have the potential to do more than just make us forget about the lacklustre Leafs. They can change the way we see our city and diversify a fan base that could transform sports culture itself.

By Stacey May Fowles 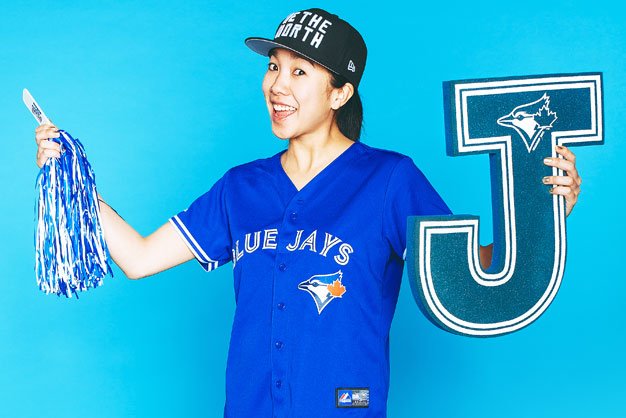 Things were noticeably more cramped than usual at this year’s spring training in the sleepy town of Dunedin, Florida.

The beer lineups were longer, the aisles more shoulder-to-shoulder and sold-out games a little more frequent. Those Grapefruit League matchups are supposedly meaningless, but more Toronto Blue Jays fans than usual embarked on the 2,000-kilometre trek south to see “Canada’s team” put in some practice time.

The old-timers in the seats behind me made their annual predictions, voicing the now ubiquitous opinion that “Toronto is the team to beat.” A José Bautista home run in that tiny 5,509-capacity Florida Auto Exchange stadium took on new meaning, the echo of his historic game-five bat flip still resonating in our collective memory (and playing on a loop on my computer screen for that matter.)

As a long-time fan, I’ve witnessed first-hand those low attendance numbers at the Rogers Centre. I’ve cried into my $10 beer during countless hopeless seasons, consistently lonely in my passion for baseball. In hockey-crazed Hogtown, a Jays fan can feel the lack of a community.

But everyone loves a winner, and an infectious buzz now surrounds this scrappy team. We’ve fallen in love with pitching ace Marcus Stroman’s big-hearted resilience, third baseman Josh Donaldson’s MVP swagger and undisputed playoff hero Bautista’s defiant big-boss attitude. Last year the team sold out 20 of its last 21 home games and had its highest attendance numbers since the 90s.

Widespread sports frenzy in Toronto is a new phenomenon. We’ve long been characterized by our losing teams, the 10 And 3 sports blog having named us the second-worst place in North America to be a fan in 2015. Only Cleveland had a higher “misery score.”

Here’s why we were considered such losers: the Maple Leafs, no Stanley Cup since 1967 the Raptors, playoff competitors seven times since their inception in 1995 but never a real threat Toronto’s newbie soccer club, no playoff appearances in their first eight years the Blue Jays, two decades without tasting the playoffs – until last year.

After the baseball strike of 1994, when a salary cap dispute put an end to our early 90s “touch ’em all, Joe” World Series excitement, thwarted Canadian fans drifted from the MLB, and in 2010 the Jays ultimately hit record low attendance numbers.

Alongside the Jays’ re-emergence in 2015, the Raptors are playoff bound and having a record-setting season, and the TFC finally made the playoffs last year.

The biggest change is that the Toronto Maple Leafs are almost an afterthought. In what used to be a hockey town, I’m grabbing last-minute Leafs tickets for 45 bucks off StubHub in the winter months and frantically trying to score an impossible pair of Jays tickets for opening day in the spring.

Not only is hockey no longer top of mind, but that general ho-hum “woe is me” attitude no longer defines our collective relationship to sports.

At spring training this year I had the startling realization that I was finally rooting for a team that is actually really good. After decades of hoping for the best and consistently coming out behind, it means something that the team on my T-shirt is a contender. Misery may love company, but winning loves it even more, and all of us are actually having fun again.

All of this goes beyond smiling at strangers in team caps and Ts on the TTC. The sports landscape is changing dramatically – in terms of who’s allowed to call themselves a fan and who’s allowed to talk about sports. Much as people tend to dismiss fandom as a frivolous enterprise, the implications for Toronto’s day-to-day culture definitely matter.

The Jays’ recent playoff bid has played a large part in making the local sports conversation more accessible. Our once exclusionary sports scene – mostly white, mostly male – has widened its borders considerably, and in doing so invites more Torontonians than ever to get on board and get involved.

The fervent baseball climate has by necessity encouraged myriad conversations and, perhaps accidentally, changed the context so there isn’t a single, monolithic way to interact with the game.

Last fall, mainstream media venues were grasping for content to feed the hunger. We got baseball takes from voices approaching the game from vastly different angles. Blogs popped up. Fan sites proliferated. Social media swelled. There were fashion takes, food takes and looks at players from a much more human perspective. We cared about their lives, their scooters, their bathrobes and their dogs just as much as their WAR (wins above replacement, a summary of a player’s total contribution to his team in one statistic) and RBIs.

Toronto baseball was no longer exclusively “owned” by heterosexual white men, no longer driven solely by opaque stats or an exclusionary old boys’ club attitude. We had feelings, and we shared them.

Zoom out a bit and you’ll see that this is an important shift, not only for Toronto fan newbies but also for major league baseball as a whole. According to Nielsen data, the MLB is struggling, holding onto the oldest median TV audience: 56, compared to 49 for the NFL and a staggeringly youthful 41 for the NBA.

The MLB is desperately clawing at getting newer, younger fans, and the changing tone here indicates how they can achieve it: widen the conversation.

The NBA has led the pack in attracting a diverse audience, something that’s easy to spot when you’re in the stands at a Raptors game. The league’s recent This Is Why We Play spots tapped into the potential of their fan base by featuring different races, genders, age groups and abilities. It spotlighted Becky Hammon, the first female assistant coach, and Jason Collins, the first openly gay player. This kind of marketing pays off: the NBA’s overall television viewership is running close behind the NFL’s.

February’s NBA All-Star Game, in Toronto, showcased basketball’s canniness at integrating a younger audience’s love of pop culture – see the popular Celebrity Game during All-Star weekend. Big-name ambassadors for the sport matter. Drake chose to sit courtside instead of in the stands at last year’s American League championship series, and high-profile fans like Rhianna and Beyoncé show that the NBA has mastered the art, unlike the other leagues. (Apologies to Jays fan Geddy Lee.)

Major League Baseball is starting to figure out that social media are a huge draw for a new demographic, bringing fans significantly closer to the players we love. This year, according to baseball Commissioner Rob Manfred, the league is looking to broaden its digital footprint and increase its platforms. On March 11, the MLB even hosted a Snapchat Day, suspending its rule of no electronic devices for players, allowing them – if only for a short while – to give fans an inside look at what their days are like.

“We think those sorts of undertakings are crucial to having these young stars reach out and connect with young fans,” Manfred told Ad Week of the initiative.

When you open the door to new and younger fans, they bring their progressive attitudes with them.

The recent old-school versus new-school debate about how to play baseball “the right way” may seem like an irritating distraction – and an easy way for old-timers to hurl insults at José Bautista – but it’s also a good thing, indicating a shift in attitudes that has the potential to forge a more inclusive space. We’re seeing it in Toronto in a new crop of fans unwilling to accept the racist, sexist, homophobic sports status quo.

There is certainly more work to be done toward creating a welcoming environment for all fans here and beyond. That’s a fact I’m reminded of every time I have to watch the all-female Raptors Dance Pak or J-Force perform while catching a game with my dad, or see an all-white-male sportswriting masthead or an all-white-male panel discussing the game.

But recent high-profile conversations about domestic violence, homophobia and racism are heartening, and fans are empowered more than ever to make demands. (Can Toronto have a Pride Day at the ballpark already?)

Sure, sports culture has notoriously been cripplingly slow at catching up with the rest of society’s attitudes, but it’s getting there, and all these new voices in the mix are crucial. We’re coming to understand that sports is both a tool and a lens through which we view our cultural climate. Changes are being made, albeit slowly.

If successful teams can bring a town together, and more fans can alter the sports landscape for the better, it’s looking to be a good year for Toronto. Beyond the Blue Jays’ potential for success, the Raptors are playoff bound and on track for a record-setting season, and our soccer team is on the move. There’s even hope for the long-suffering Leafs as they “rebuild.”

And a good year for Toronto sports teams means a better city for all of us.

By Stacey May Fowles