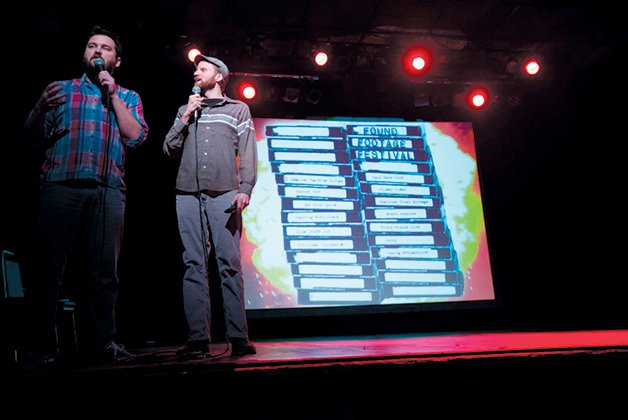 The fest celebrates its 10th anniversary this year, and Prueher and Pickett are bringing an all-new collection of deadpan, disturbing clips to the Royal Wednesday night (March 26).

“We’re as surprised as anybody that we’re still doing this,” says Prueher. “Last year we did 130 shows in all 50 states, and even went to Europe.”

Prueher, who has worked on Late Night With David Letterman and The Colbert Report, says the show’s touring aspect is what’s kept it fresh over the years.

“We do the shows at night, and then we have all day to trip through stores and estate sales,” he explains. “There are videos that I actually found in a dumpster, just saw them sticking out as I walked by. When you know what you’re looking for, you see tapes everywhere. It’s one reason we don’t take any videos from the Internet, because for us the really fun part is the search, the hunt for these tapes.”

Though they direct music videos and the occasional documentary (Dirty Country), the Found Footage Festival is a full-time job for Prueher and Pickett. They spend nine months of the year touring the show, and the other three going through tapes to assemble the next one.

It can be a pretty gruelling process, he admits.

“Maybe five per cent of the stuff we find is good, which means that to put together a 90-minute show you’ve got to watch hundreds of videos. It’s real dark-night-of-the-soul stuff. You question what you’re doing with your life.”

Nick Prueher on the risks of screening graphic material, and knowing how far to push their audience:

Prueher on the story behind his performance as Chef Keith on a series of morning talk shows: