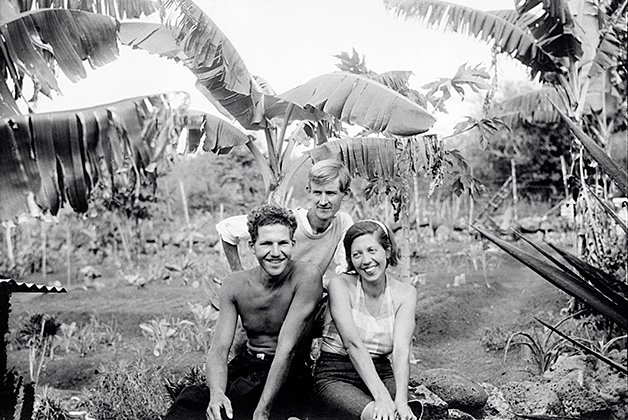 The Baroness von Wagner poses with her lovers Robert Philippson (left) and Rudolf Lorenz in 1932 on Floreana island.

This documentary whisks us back to the 1930s on the remote Galapagos island of Floreana, where a handful of European eccentrics attempt to escape civilization and wind up becoming precursors of a season of Survivor.

“War is fixed in the genes of human beings,” says one of the central figures, unaware that he’s going to prove his own theory. By the end of The Galapagos Affair, some inhabitants of this new Eden have disappeared without a trace, though there’s ample evidence to suggest they’ve been murdered.

The islanders include a Nietzsche-fixated German physician and his younger MS-afflicted lover, another German couple expecting their first child, and an imperious, self-described French baroness accompanied by a pair of gigolos. Many of them left diaries that are read in voice-over by Cate Blanchett, Sebastian Koch, Diane Kruger and other name actors.

The story is inherently captivating, but the film suffers from an excessively leisurely pace, with glacial transitions, overused stills and mostly superfluous interviews with the subjects’ descendants.

It’s worth seeing, but the tale might have been better conveyed in a long-form magazine piece or well-structured book.