For some victims of violence, social media is becoming the place to find community justice outside the courts 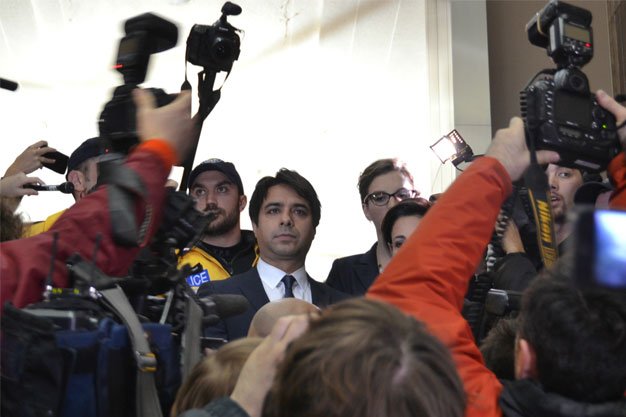 Our December 3, 2014 publication included “The Ghomeshi Effect”, an article regarding the manifestation of transformative justice in social media. That article made reference to a situation involving Greg Frankson and Ottawa’s Capital Poetry Collective as a means of illustrating the social phenomenon that is the article’s subject. We reiterate that the situation involving Mr. Frankson involves unproven allegations. Moreover, any association that may have been drawn or inferred by readers between that situation and the abuse allegations against Jian Ghomeshi was unintentional.

When it comes to violence against women, it isn’t so much the charges against Jian Ghomeshi that’s stirring the talk – it’s the women who have come forward. Ghomeshi is going on trial because of a kind of community action.

As others have observed, many of us needed the brutal details before we took the allegations against Ghomeshi seriously. If only one woman had come forward against the most powerful media personality in Canada, would charges have been laid?

If you didn’t know how much the justice system has failed women, you probably now have a rough idea: out of every 1,000 sexual assaults that occur in this country every year, 12 are reported and about three result in convictions. There is a very legitimate fear that the process of going through the courts will re-traumatize victims.

For change to happen, it takes a village – it takes a community. For some, social media is becoming the place to find community justice outside the courts. It was in part an online conversation about Ghomeshi that led to several women coming forward.

And last week, Canada’s spoken word poetry community, beginning with Ottawa’s Capital Poetry Collective, banished founding member Greg Frankson from events after allegations of abuse and assault were posted on behalf of victims on a public Facebook page (the post has since been taken down). The Toronto Poetry Project and Victoria Poetry Project have also announced that Frankson is not welcome at their events.

Some, including members of the spoken word community, have called the actions against Frankson “a witch hunt.” But a source close to the situation tells me Frankson had been confronted about his alleged behaviour on several occasions in the past.

An obvious problem with banishing is that alleged abusers can continue their activities in other communities.

And as some pointed out when the grievances against Frankson were aired on social media, it precludes the opportunity for reconciliation – what is sometimes called “transformative justice.”

Molly Bannerman and Joan Ruzsa are devoted to that cause as members of Rittenhouse, an organization “dedicated to bringing healing justice [transformative justice] instead of retributive justice in our criminal justice system.” This is done through “alternative, community models of accountability.”

Ruzsa says she can’t speak specifically to the situation in the spoken word community. But although she expressed that the safety of a collective ought to come before the inclusion of any one individual, she fears that banishing as a tactic doesn’t address the root problems of violence.

One possible solution for transformative justice she offers is the holding of a “support circle” for victims of violence and an “accountability circle” for alleged perpetrators.

In such a process the survivor might discuss what she or he would need from the abuser to feel a sense of healing and justice. For instance, the abuser could be asked to get counselling or write a statement about understanding the consequences of his or her actions.

In an accountability circle, the abuser would ask friends to guide him or her through the process of meeting the requests of the survivor. Someone would act as a go-between for both circles.

Bannerman says models of transformative justice work on the belief that “communities are in the best position to create change.

My source in the spoken word community say that banishing is not their only solution. A code of conduct is being developed that will be applied nationally at all spoken word events and gatherings. It has also been proposed that elements of consent practice be read aloud at spoken word events to make boundaries clear.

Despite the inadequacies of the criminal justice system, we can’t abandon it. But community experiments on- and off-line have enough political momentum to suggest they’ll likely continue after the Ghomeshi affair has become a footnote.