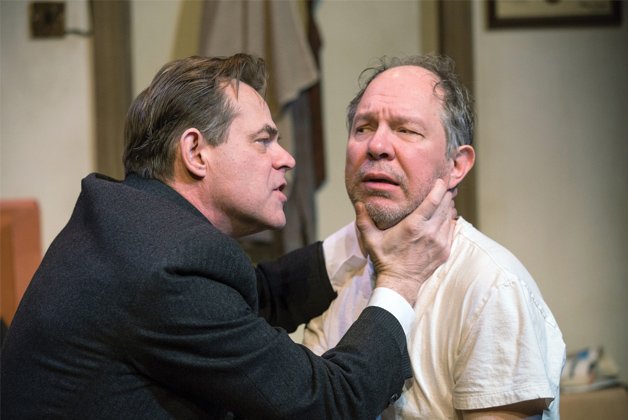 It’s easy to understand why an actor-based company like Soulpepper would want to tackle Tom Murphy’s little-known play The Gigli Concert. The central theme – the power of art to transcend life – is always a crowd-pleaser, and the two lead roles are great showcases for versatile actors, drawing on elements of tragedy, comedy and even some lip-synched opera singing.

The pieces of the play take a while to assemble, and over two and a half hours there’s not much to look at on Ken MacKenzie’s cluttered, realistic set. But director Nancy Palk gets nuanced performances from the two actors, Matamoros moving from quiet despair to manic confidence, while Hughes changes from a closed-off, suspicious control freak to an energized man painfully recalling an abusive history.

Poole, although her part is underdeveloped, adds an earthy feel and sardonic humour to her few moments.

Liberal use of recordings of Gigli’s famous arias and scenes adds atmosphere to scene changes. But it’s a shame some of the emotion in those songs doesn’t make its way into the frequently clunky script, which at times feels like a dramatized Oliver Sacks case study.