Wes Anderson's beautifully constructed film is worth checking into 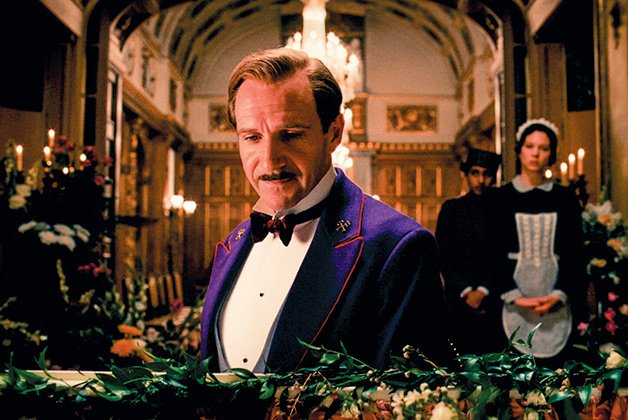 Ralph Fiennes is at your service.

Wes Anderson doesn’t make movies so much as meticulously construct them down to the very last element. It’s just how he works.

I would have said his control-freak genius reached its apotheosis with Fantastic Mr. Fox, a stop-motion project that let him literally build an entire world with which to tell his story. But now he’s gone and made The Grand Budapest Hotel, a live-action movie that somehow feels even more personally designed.

A story within a story – several stories, actually – The Grand Budapest Hotel recounts the entirely fictional tale of Monsieur Gustave (Ralph Fiennes), the unflappable concierge of the eponymous mountaintop manse in the European country of Zubrowka, and his training of the young lobby boy Zero (Tony Revolori) in the ways of service and life.

It is a story filled with intrigue, love, war, murder, betrayal and a fairly novel prison break, and if I were to say anything further about what Anderson does with Willem Dafoe as a sort of human bulldog you wouldn’t believe me.

Anderson doesn’t even nod toward realism, as he did in Moonrise Kingdom two years ago he simply builds this magnificent playhouse, populates it with actors he knows and trusts – among them Adrien Brody, Bill Murray, Tilda Swinton, Jeff Goldblum and Edward Norton – and runs riot.

Most of Anderson’s previous films take place within modest windows of time. The story of The Grand Budapest Hotel spans at least seven decades of recent history, though it’s not our history Zubrowka is riven by a pan-European war in the early 1930s, the conquering army bearing a distinct resemblance to First World War Germany.

This historical sweep allows Anderson and cinematographer Robert D. Yeoman to create their magnificent tableaux in a variety of different modes, employing multiple aspect ratios and visual motifs to indicate the era in which a given sequence takes place – the squarer Academy ratio for the earliest time period, anamorphic widescreen for the Silver Age, conventional “flat” 1.85:1 for title sequences and interstitials.

It goes beyond that. The Grand Budapest Hotel is packed with visual and textual references. Jean Vigo, F.W. Murnau and Max Ophuls are the primary cinematic touchstones, and there’s also a strong streak of Vladimir Nabokov running through the complex, self-referential narrative.

But all of these sources have been Andersonized, reconfigured to serve his magnificent, meticulous design.

And when moments of genuine emotion pierce that perfectly constructed artifice, they hit as powerfully as ever. That’s just how he works.