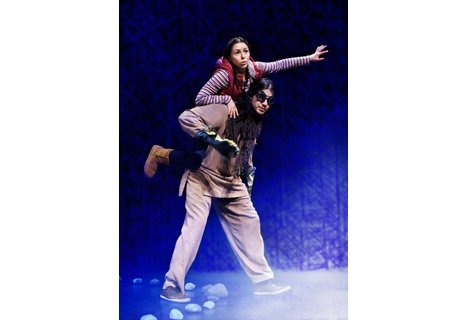 Aimed at family audiences, The Great Mountain relates the importance of caring for Mother Earth, wrapping the message in the tale of a young girl’s quest.

Nuna (Allyson Pratt), a city-dweller, is troubled by cries that no one else around her can hear, not even her old, wise grandmother, Mika (Nicole Joy-Fraser). But Mika knows something bad is happening and accompanies Nuna partway on a journey to a great mountain, across a formerly laughing river, with the help of others (all played by Meegwun Fairbrother) they meet along the way.

Ultimately Tracey Power’s play, based on the aboriginal Northern Plains legend of Jumping Mouse, is a tale of courage and growing up, a mix of adventure and acknowledging that we are caretakers of the planet.

It also subtly mixes in the importance of family and tradition, for among its multiple characters are seven generations of Nuna’s family, from her great-great-grandfather to her own grandson. The transformations in time periods are nicely done, delicately pointing out that we always stand on the backs of our ancestors.

The production by Red Sky Performance, given a fine staging under Alan Dilworth’s direction (Sandra Laronde is credited with creative direction), is a generally entertaining one, with energetic, committed performances by the trio of actors. They play a dozen roles and are especially engaging in the choreography by Carlos Rivera and Laronde, notably Mika’s journey on a fisherman’s back across the now-sad, distrustful river.

Fairbrother is an audience favourite as a spunky young boy, “the only and greatest warrior of my territory,” who also hears the voice of the mountain and aids Nuna in her quest, and a hyperactive train conductor costumed by Jeff Chief as an iron horse.

Though the message is an important one – listening to the often-ignored tears of Mother Earth – it’s sometimes repetitious and obvious in its presentation, possibly because of the range of the intended audience, from grades one to seven. That’s a wide age spread, and the play does some unnecessary underlining of its message so that everyone is sure to understand.