What could be more Canadian than singing about log drivers at an art gallery whose cemetery is the burial grounds for six members of the Group of Seven? 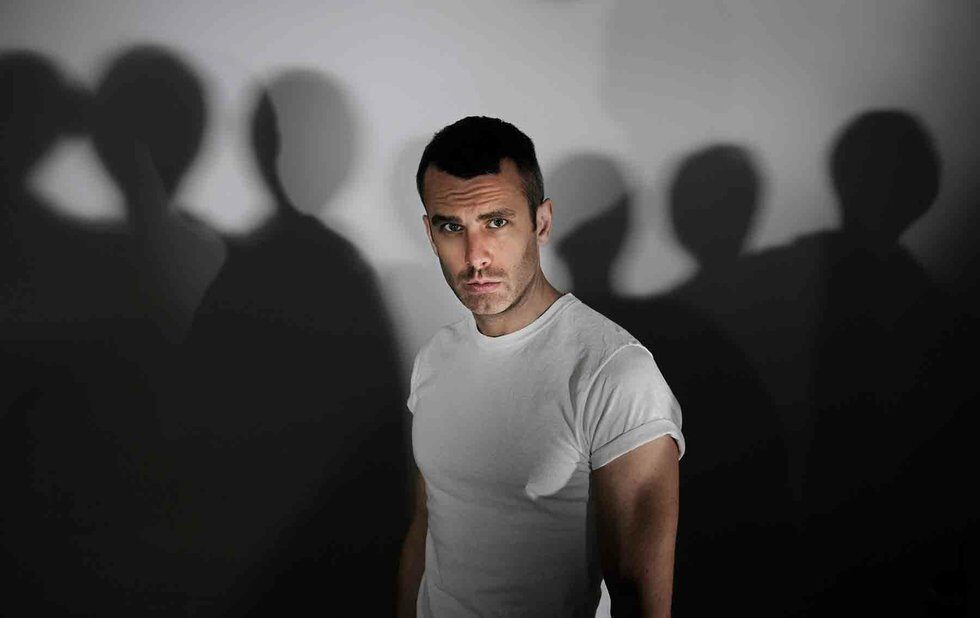 Joel Gibb of the Hidden Cameras

I’m following Joel Gibb as we bike along College, and approaching Yonge we’re met with an obstacle course of construction. A seasoned Torontonian, he calmly crosses into the streetcar tracks, biking confidently onward while waving at the operator, who’s obliged to slow down.

We arrive at a café to meet Harriet Alida Lye (full disclosure: we are friends), manager of digital media at the McMichael Canadian Art Collection, where the Hidden Cameras perform acoustically on Thursday (October 20) to launch their new album, Home On Native Land. Gibb and Lye are finalizing the images for when he takes over the McMichael’s social media feed during the week of the show. His selections pair art from the McMichael collection – by Michael Snow, Sarah Anne Johnson and Doris McCarthy, for example – with work by Gibb’s community of artist friends.

I ask Gibb, freshly back from Berlin, where he lives part-time, about the album title. “I wish I could make up a different answer every time,” he laments. “Like, I sang the wrong words to the national anthem in Catholic school and the priest gave me 20 lashes.”

Coming from a musician who once described his indie pop band as “gay church folk music,” the story would convince many. While the new album retains a measure of that signature sub-genre, it also transcends the Hidden Cameras discography as a poignant and eclectic tribute to the Great White North.

Many of the songs were done in one take, says Gibb, live off the floor with little post-production. This is surprising considering how polished they sound, but also believable considering the calibre of musicians involved: Feist, Rufus Wainwright, Bahamas, Ron Sexsmith, Mary Margaret O’Hara and Neil Tennant all contributed.

Gibb has described the project as a document of the Toronto music scene, and while his voice is the most prominent, he’s also captured the energy of playing live with friends, lending the songs tremendous warmth.

Perhaps the most Canadian thing about Home On Native Land is its cover of folk song Log Driver’s Waltz. Canadians of a certain age will remember seeing the National Film Board’s animated film version of the song in the 80s. Viewing it on YouTube, I was transported back to my elementary school classroom, sucked into a vortex of history and nostalgia.

In this regard, the partnership between the Hidden Cameras and the McMichael is fitting: what could be more Canadian than singing about log drivers at an art gallery whose cemetery is the burial grounds for six members of the Group of Seven?

In August I attended Best Field Trip Ever, which transports motorless art lovers from the Gladstone Hotel to the McMichael in a big yellow school bus. Lye, who organizes these expeditions, explained to me that the permanent collection grew out of the private collection of Signe and Robert McMichael and that the gallery was once their house.

Passing the totem pole at its entrance, I did a double take: it features an eagle, a raven and a frog (crests of the Haida people), but each has been carved holding a cellphone, MP3 player and laptop respectively. This combination of old meets new is consistent with the gallery’s MO: to introduce visitors to Canada’s contemporary artists while honouring the legacy of its past visionaries.

Back in Toronto, after Gibb and I finish our coffees, he shows me a picture of a T-shirt an artist friend has created as potential band merch. The mock-up is of a naked man in a cowboy hat, the words “Hidden Cameras” covering his genitals. Above the band name, a significant patch of pubic hair is visible. The tip of the man’s penis peeks out the bottom.

“All right,” he says. “Back to the drawing board.”