The Hoxton to close at the end of January

The King and Bathurst live music club that has hosted Kanye West, Diplo and the Kills is shutting down after six years 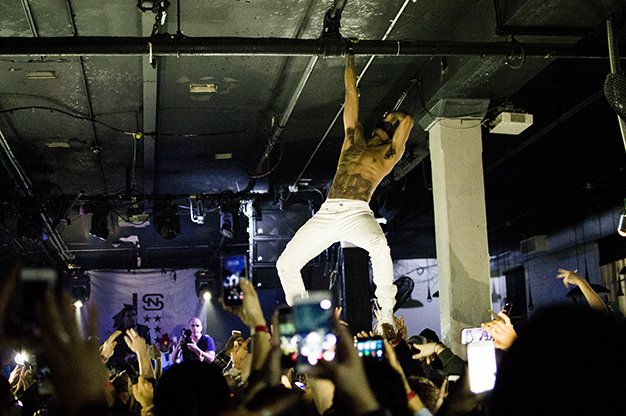 Nightclub and concert venue the Hoxton will host its final party on January 28.

The venue’s co-owners, Richard Lambert of the Social Group and promoter Embrace, have decided not to renew their five-year lease.

Although they had the option to renew, the developer that owns the building at 69 Bathurst plans to redevelop eventually.

“When you can’t do anything with the space – you can’t renovate, you can’t spend money – then you can’t build a future,” Lambert tells NOW. “If you’re not going to be there for more than a year or two, it’s just not worth it.”

Since opening six years ago, 637-capacity venue was the go-to spot to catch rising EDM stars like Skrillex and Diplo. It also hosted touring artists like Thundercat, Kelis, the Kills, Hudson Mohawke, Tory Lanez and Skepta, as well as a Toronto International Film Festival party featuring Snoop Dogg and a wild after-party for Kanye West’s Yeezus tour in 2013.

Lambert teamed up with Embrace and Kenny Hotz of Kenny vs. Spenny to open the Hoxton after his Queen and Dovercourt club the Social closed down in 2010. (He opened the Dog & Bear pub in its place.)

The club is the latest in a string of live music venues to close. Last week, the owners of west-end spot Hugh’s Room shut down amid financial troubles and DIY venue Soybomb shuttered earlier this week. The previous year saw the closings of King Street’s Cabal, Parkdale’s Not My Dog, and Queen and Bathurst clubs The Hideout and Tattoo, among others.

Although Lambert would not comment on the rent – except that “it’s a lot” – he points out that trends in the city’s nightlife have shifted away from clubs that emphasize music programming.

“I don’t think the void [that was left by the Social] was ever filled,” says Lambert. “We were never bottle service people. We were more about music and an atmosphere, but I think that’s died a little bit. A lot of King Street clubs cater to a bottle service crowd. That’s not what we were.”

Acts booked through the end of the month include Kill the Noise, EDX, Joyride and Deorro. The final party will take place on January 28 and feature DJ/producer Hunter Siegel, a Hoxton regular.

Embrace will shift the types of artists who would have played the Hoxton to the nearby Velvet Underground, which it renovated and revitalized last year, or clubs Maison Mercer and Coda and the larger Danforth Music Hall.

In March, he will open a British pub called the Anne Boleyn at Peter and Richmond to target the condo dwellers and offices moving into a neighbourhood that was, ironically, once known as the city’s clubland.

“I’ve personally outgrown the nightlife component,” he says. “This is a British pub and hopefully we’re doing something there that nobody’s done yet similar to pubs in the UK that are a little more serious.”

Parts & Labour chef Brent Pierssens will move to the Anne Boleyn to head up the kitchen.