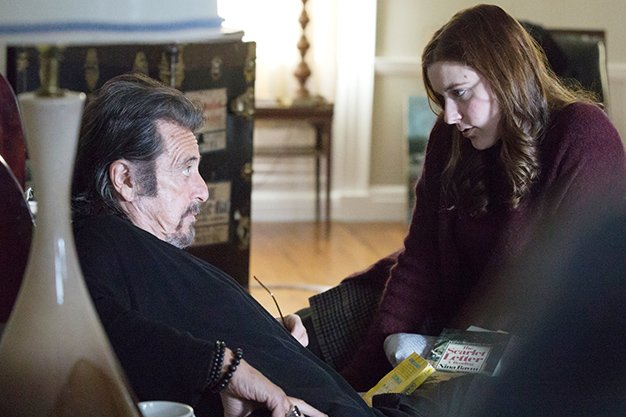 Al Pacino and Greta Gerwig are fine in boneheaded The Humbling.

Feeling like the scenery needs protection every time Al Pacino hits a movie set? Think he’s trying too hard in his old age? The Humbling may change your mind. He’s perfect as a panicking aging actor – the character is as the actor does.

But the film just can’t shake its creepy premise.

Famed thespian Simon, fearing that he’s dogged by dementia, hurls himself off the stage during a performance and heads for a month to a mental facility. When he returns to his Connecticut mansion, he has an affair with the lesbian Pegeen (Greta Gerwig), much to the distress of her exes and, of course, her parents.

There’s no reason for Pegeen to be a dyke except to build on the fantasies of the aging Philip Roth, who was well into his 70s when he wrote the original novella. Screenwriter Buck Henry tries to minimize the damage – Pegeen seduces Simon rather being conquered by him and is half his age rather than one-quarter as in Roth’s book. But it’s to no avail, and regardless, the relationship goes off the rails in nonsensical ways.

Director Barry Levinson does good work with his actors – Gerwig, as always, is great, sustaining an edgy energy – but this is really two stories: one about an old guy trying to prove he’s still got it sexually speaking, and the other about an artist losing a grip on his craft.

The latter plot point is decent. The former? Yuck.