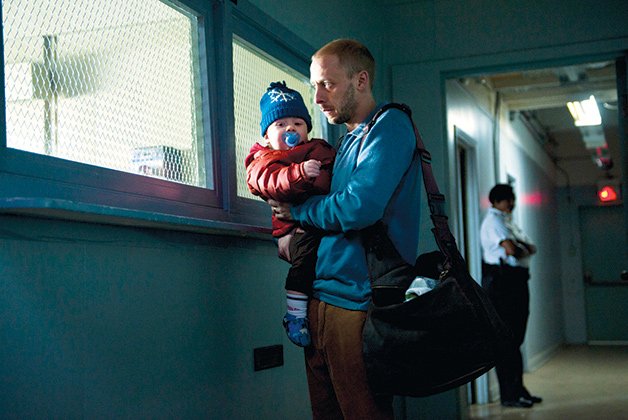 Writer, producer and ex-Deadly Snake Maxwell McCabe-Lokos plays Henry: slight, wiry, bug-eyed and balding, onscreen for what feels like 100 per cent of The Husband’s run time. His wife (Sarah Allen) is in prison for sleeping with one of her students, leaving Hank to raise their infant son and suffer the daily indignities of being, as he puts it, “that guy whose wife fucked a 14-year-old.” He’s not doing well.

Sleepwalking through his job at an ad agency, exiling himself from his spoiled marriage bed to pass out on the couch, barely tending to his kid, Hank’s a rat king of anxiety.

He stalks his wife’s pint-sized lover (Dylan Authors), offering him a PS3 as a gesture of mock-goodwill. And, in what might be the most uncomfortably funny attempted child rape scene this side of Todd Solondz’s Happiness, he makes advances to his teenage babysitter in a bid for cosmic score-settling. His motivations, and his jittery mental states, are intentionally left unclear.

This obliqueness begins to frustrate as the film nears its too neat conclusion, but McCabe-Lokos’s tragicomic performance carries The Husband through its vacillating moods.

It’s a film that feels, often at the same time, manic, depressive, sinister and absurd – a movie as neurotic as McCabe-Lokos’s broken man.