The ins and outs of onstage intimacy

As we gaze into each others eyes, its our breathing that changes.The previous scenarios had us looking at each other. 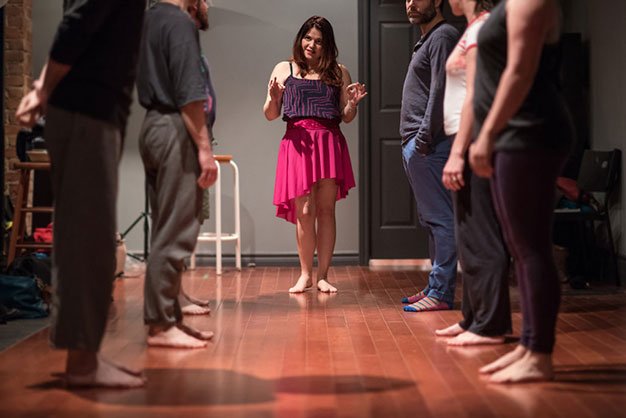 As we gaze into each others eyes, its our breathing that changes.

The previous scenarios had us looking at each other as if we were friends, or as if one were a friend and the other harboured a secret crush.

Now our instructor, Tonia Sina, has told us that both partners are feeling intense love, or lust, for each other. I see people taking deep breaths as they look at each other without moving or speaking. No one is acting for an audience. Some are involuntarily leaning forward, hands twitching as they fight the impulse to reach out.

I can practically hear hearts thumping, pulses quickening. And were all standing 10 feet apart.

The Oklahoma City-based Sina is in Toronto for a two-day workshop called Intimacy For The Stage hosted by local stage combat company Burning Mountain.

Canadian theatre companies are accustomed to working with internationally qualified teachers to learn creative, elaborate and safe fight techniques. But intimacy coaching is quite new.

Some people would say, Well, thats just acting, Sina says, but it really helps actors establish intimacy quickly and safely if they have techniques to help them find chemistry in the rehearsal process. Theyre really effective in helping build relationships onstage and not just sexual ones.

Good directors will help the cast establish bonds of trust and mutual respect before attempting to stage difficult material, but with rehearsal periods getting shorter before shows open, actors can find themselves locking lips or exposing themselves or others with a bare minimum of preparation.

Coal Mine Theatre recently staged Killer Joe, a story of betrayal and exploitation in a Southern trailer park. Cast members Matthew Edison and Vivien Endicott-Douglas emphasize the importance of establishing those bonds before stripping each other down in front of an audience, or even in rehearsal.

Trust is the largest aspect in these things both the sex and the violence, Edison says in an interview. If you dont have that trust established, youll pull back and the work will suffer.

Siobhan Richardson, co-founder of Burning Mountain and the organizer of Sinas intensive, was keen to bring her to Canada and take the workshop herself after reading an article in the Fight Master, a trade publication, about Sinas decade of practice.

Its a specialty we havent yet seen here in Canada. If you Google intimacy choreographer, not much comes up.

Violence onstage can be physically dangerous if its not precisely choreographed. Stage intimacy can be emotionally perilous.

For instance, says Richardson, it can lead to showmances, where the drama onstage bleeds into actors real lives.

In her article, Sina wrote about her own showmance that led, in part, to her career path. In a student play, her director told her co-star and her to practise a kissing scene that lacked chemistry in the theatre lobby, unsupervised. The rehearsal-turned-make-out session led to her breaking up with her fiance and dating her co-star for a month, or until just after the show closed.

Theres this idea that if youre not 20 years old you should know how to navigate this already, says Richardson, that as a professional you can have an onstage relationship and not have it blur into your own life. But showmances are so prevalent. We just dont have a good process in the industry for dealing with these situations.

A recent New York Times article entitled Sex And Violence, Beyond The Script interviewed dozens of theatre professionals about the theatres poor track record of dealing with the more serious side of intimacy and sexuality: unreported sexual harassment.

Issues of consent can arise even in an onstage scene if one performer starts improvising.

Sometimes on the last day of a show, something that was consistent becomes extra-grabby, tongues get involved, hands drift where theyre not supposed to, says Sina. Anything that goes beyond the choreography that isnt agreed upon and becomes real is harassment, and that can open the company up to legal action. But its far more likely that someone will feel violated but unsafe speaking up about it.

The students at this first Intimacy For The Stage intensive are mostly experienced performers and directors, ranging from the co-artistic directors of a childrens theatre company (Intimacy can be between friends, siblings, mothers and daughters these all require chemistry, Sina says in her introduction) to a director starting rehearsals soon on a show that requires full nudity and sexual touching.

Their questions for Sina involve dealing with onstage erections and how audiences in very close proximity to sex scenes onstage will react.

Whats different is the intent of these exercises. Sina builds on them so that what took minutes to establish a bond between paired performers can be re-established in seconds. At every stage theres group discussion about what people are and arent comfortable with.

Most of all I emphasize communication within the cast, from director to actor and with the stage manager, Sina says. There should never be a rehearsal without a stage manager or coach or other third party present. Without one, without someone supervising, its no longer the work of acting.

On shows she choreographs, Sina ensures that every touch and caress is carefully negotiated and noted, just as it is when working up a fight scene.

Intimacy must be treated as choreography and should never be improvised, she asserts.

This was certainly the rule when Edison and his cast-mates were working on their scenes for Killer Joe.

A lot of the sex and violence co-exist in this show, Edison says. We had a fight director, Steve Wilsher, who looked at the combat parts, where bodies came into forceful contact. But [director] Peter [Pasyk], Madison [Walsh], Vivien [Endicott-Douglas] and I figured out the explicit scenes.

Of Killer Joes five cast members, all but one had mostly or fully nude scenes a whole other type of anxiety-inducing job requirement.

Everyones comfort level is different for this sort of thing, especially when you introduce nudity, says Edison.

Were actors, but also ourselves our bodies are on loan to these characters.

As long as I know what story were telling, what effect were having and why this element [of nudity] is important, I told him Im on board, she says. Peter always said in rehearsal, I defer to you in terms of what comes off when. But for the show, of course, much of it is specific in the script.

That specificity is why Sina thinks its so important that intimacy onstage be very precise and controlled.

Theres a language Im trying to introduce to theatre companies, a standard for staging intimacy that should be followed from rehearsal into performances, and documented just like fight choreography. It should be rehearsed, like a fight call, before every performance, to make sure nothing extra or surprising will happen. That way, the company protects itself and its actors.

If much of this sounds dire or uncomfortable, working with Sina and her students has the opposite effect. Theres lots of laughing and, occasionally, unexpected tears after the evenings more advanced exercises involving hugging have closed out day one.

Sinas work is very intimacy- and sex-positive. When its done properly, with trust established between participants, rehearsing and staging intimacy is uplifting and joyous.

The seductive nature (double entendres are a given in intimacy coaching, Sina tells me at one point, laughing) makes it clear why so much chaos can ensue if the intense feelings it generates arent kept in check by professional boundaries.

Human nature is wanting to be loved, says Sina. When you get that attention from somebody, even in these contrived circumstances, its very tempting. Its important to clearly define the work so people can return to their own lives.