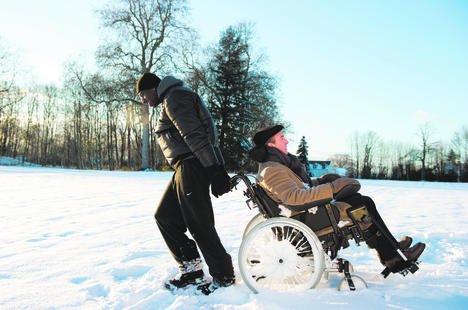 Philippe (François Cluzet) is a wealthy quadriplegic, paralyzed below the neck after a hang-gliding accident Driss (Omar Sy) is his working-class helper, whose pissy attitude caught Philippe’s attention during his job interview. Philippe appreciates the idea of being attended by someone who won’t sugar-coat things.

That’s the premise of The Intouchables, a well-acted, charming buddy picture for the subtitle set. Cluzet can do more with a wince or a raised eyebrow than some actors do with their entire bodies, and he’s nicely paired with the physically imposing Sy. The movie also addresses the practical realities of quadriplegia with a patience that’s rare in cinema.

And yet on some level I couldn’t help thinking that directors Olivier Nakache and Eric Toledano have meticulously calibrated The Intouchables to hit the centre of some grand art house Venn diagram. There’s the unexpected bonding across class and colour lines, the unsanitized treatment of physical disability, a subplot in which an older character saves a younger relative from gang violence, and a master plot about a wealthy white man who learns to embrace life again through his friendship with a worldly-wise ethnic person.

Sure, The Intouchables is based on a true story, but it’s been filtered through a certain crowd-pleasing, triumph-of-the-spirit sensibility that I recognize from every Miramax foreign-language pickup released between about 1994 and 2006.