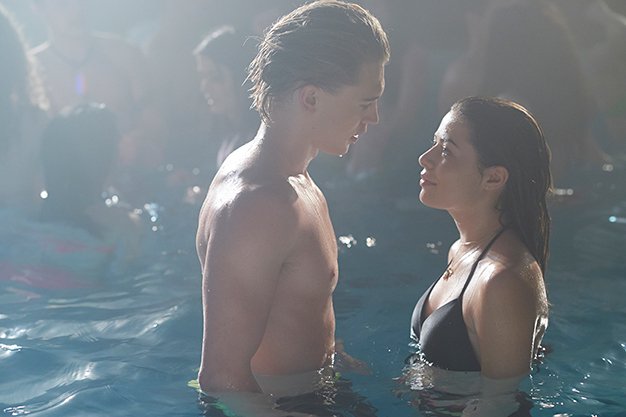 Austin Butler and Miranda Cosgrove don't make much of a splash.

Creaky walls, doors that crawl open, mutilated plastic dolls and neighbours with plastic bags scurrying away at night. The Intruders stacks the deck with all the familiar horror signposts, as if straying from cliches were the most frightening thing of all.

Evidently produced locally on a dime (with plenty of tax credit assistance), the film is a bare-bones attempt at delivering jolts without investing in sympathetic characters or adding nuance.

Miranda Cosgrove of iCarly fame goes through the motions as Rose, an off-her-meds teen plucked from her California lifestyle and relocated to a wintry Illinois small town (actually Sudbury). The Victorian home her recently widowed and ever-absent father purchased comes complete with all the telltale signs that bad shit has happened: boarded-up windows, a basement dungeon and musty green wallpaper.

Dad (Donal Logue) thinks his daughter is schizophrenic when she reports that things are going bump in the night. His lack of concern is contagious.

The Intruders can’t conjure the requisite tension or sense of unease, because all the jolts and revelations are delivered right on time, as if the formula were mapped out on the clock.