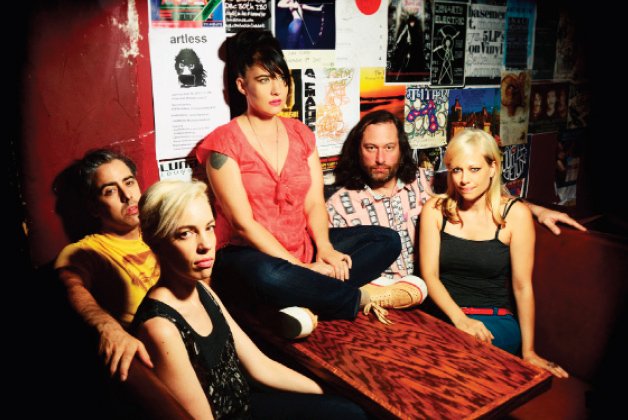 It’s hard to keep up with Kathleen Hanna.

“It’s kind of I Love Lucy meets John Waters,” she tells NOW over the phone from New York City. “I don’t know if the script will ever become a pilot, but you know, I wrote my first script and sold it, so that’s a huge achievement.”

If Hanna’s comedy is anything like her music, it will draw power from vulnerability.

As the lead singer for Bikini Kill, the Olympia, Washington, band that fuelled the feminist punk riot grrrl movement in the early 1990s, Hanna cultivated an explosively confrontational persona. The Punk Singer’s release coincided with a wave of renewed interest in riot grrrl that was further stoked by media coverage of Russian feminist punk collective Pussy Riot.

When her band the Julie Ruin performs at the Mod Club this weekend, it will mark Hanna’s first Toronto concert after a tumultuous 10 years.

Their debut album, Run Fast, was written and recorded while she was battling Lyme disease. Undiagnosed for years, the tick-borne illness forced her band at the time, electro-pop trio Le Tigre, into early retirement. She kept her health issues secret from fans, agreed to participate in the documentary and donated her riot grrrl ephemera to New York University, thinking she had little time left.

“My health is really, really good. Knock on wood,” she says. “I still have a little bit of treatment to go, but it’s a lot less difficult than it was before.”

Run Fast retains the live-off-the-floor electricity of her punk days but pays more careful attention to detail, texture and arrangement.

“The content and the form really fit together in a way that makes it even more powerful than things I’ve done before,” explains Hanna. “In the past, I was almost afraid of having something that was too complicated, too dynamic or sounded too professional. Now I enjoy listening to the crazy shit my band can do. I’m not shying away from it like I used to.”

There are songs about aging and mortality, gentrification and female identity, but the tone is more confessional than didactic. The record is sometimes flirty and humorous but retains the anthemic quality of her older material through slow-building melodies and Hanna’s full-throttle vocals. Weary of producing songs that feel like “wallpaper,” she sought to push the boundaries of pop songwriting, citing the harrowing, cathartic title track about her childhood as an example.

“It felt good to be able to write about my personal experiences, because I was in a band that was very associated with 90s nostalgia,” says Hanna. “I didn’t want [this album] to be nostalgic, but then I was like, that’s my life. I’m allowed to write about stuff that happened to me.”

She’s hardly oblivious to the expectations of long-time listeners. Many see her as a political leader, but with Run Fast she reminds us she’s an individual, not a cause.

“The frustrating thing now is that I get treated like a brand, and I think this happens to a lot of artists,” she says. “I’m not a brand of feminism I’m a person. I don’t mean to represent all of feminism. When I make a mistake, it’s as if feminism made a mistake or feminist music in general made a mistake. I can’t be responsible for that. It’s too much pressure.

“If you choose to paint pictures of flowers, that’s a political decision in and of its own. And sometimes I want to paint flowers,” she says, laughing. “I hit the target more when I look away than when I’m staring at it. That’s part of the reason I’m just letting myself have fun.”

You often bring feminist, political and queer ideas into pop music, but do you ever have the urge to make music that is more subversive or reflects those ideas in a different way?

Bikini Kill has been re-releasing back catalogue material recently. As you listen to your old stuff, has it inspired your approach to making music with The Julie Ruin?

Do you find the media coverage of pop artists who make political music has evolved over the years?